Huge crowds of mourners have poured onto the streets of Tehran to pay their respects to Qassem Soleimani, the country’s most powerful military commander who was assassinated in a US air attack in Iraq.

State television said on Monday there was a “several million-strong” turnout for the funeral proceedings for Soleimani, who was the head of the Iranian Revolutionary Guard Corps’s (IRGC) overseas forces.

Supreme leader Ayatollah Ali Khamenei, who has pledged “severe revenge” for the killing, presided over prayers for the slain general.

Standing next to Iranian President Hassan Rouhani and Iran’s Speaker of Parliament Ali Larijani, Khamenei wept at one point beside the flag-draped coffins containing the remains of Soleimani and five other “martyrs” killed in Friday’s strike in Baghdad.

“The scenes that we saw included a very emotional supreme leader, which is something that we don’t see very often,” Al Jazeera’s Dorsa Jabbari, reporting from Tehran, said.

“There were very intense emotions on display by the highest-ranking officials in the Islamic Republic,” she added.

“Iranians are very angry at the way he [Soleimani] was killed… They feel that this is a very unjust act that was carried out.”

Iran’s semi-official news agency ISNA reported that the streets of the capital were so full of mourners that many were unable to emerge from underground metro stations.

“There are large crowds at metro stations but as there is also a huge crowd at the street level, it isn’t possible to evacuate passengers,” metro chief Farnoush Nobakht was quoted as saying.

In freezing early morning temperatures, women dressed in black walked alongside men holding up flags bearing the names of Shia imams as they walked down Enghelab (Revolution) Street towards the university.

Addressing the huge crowd, Soleimani’s daughter, Zeinab, said the US and its ally Israel faced a “dark day” for her father’s assassination.

“Crazy [Donald] Trump, don’t think that everything is over with my father’s martyrdom,” she said in an address broadcast on state television, referring to the US president.

“The families of US soldiers in the Middle East will spend their days waiting for the death of their children,” she said to cheers.

Brigadier-General Esmail Qaani, the new commander of Quds Force and Soleimani’s successor, was also in attendance.

“We promise to continue martyr Soleimani’s path with the same force … and the only compensation for us would be to remove America from the region,” state radio quoted Qaani as saying.

The funeral was also attended by officials from some of Iran’s allies in the region, including Ismail Haniya, the senior political leader of Palestinian group Hamas.

“I declare that the martyred commander Soleimani is a martyr of Jerusalem,” Haniya said.

Tens of thousands of people have poured onto the streets of Ahvaz and Mashhad in Iran for the funeral procession of assassinated general, Qassem Soleimani. pic.twitter.com/mbMfjbjXb3

The funeral procession in the capital came a day after hundreds of thousands of mourners accompanied the coffin carrying Soleimani’s remains in the cities of Ahvaz and Mashhad. The multi-city ceremony will continue with Soleimani’s remains going to the holy city of Qom before his burial on Tuesday in his hometown of Kerman.

Several others were also killed in Friday’s attack on a convoy at Baghdad airport, including Iranian-backed Iraqi militia leader Abu Mahdi al-Muhandis.

The attack was ordered by US President Donald Trump, who said the elite Quds Force commander had been planning an “imminent” attack on US diplomats and forces in Iraq.

The Islamic Republic’s supreme leader pledged “severe revenge” while other pro-Iran figures in the region, including the head of Lebanon’s Hezbollah movement Hassan Nasrallah, have also promised retaliation.

Though it is unclear how or when Iran may respond, any response is likely to come after the conclusion of a three-day mourning period.

The assassination of Soleimani triggered a dramatic escalation of tensions in the region and marked the most significant confrontation between the US and Iran in recent years.

The friction is rooted in the 2018 US decision to pull out of a nuclear deal signed in 2015 between Iran and world powers. 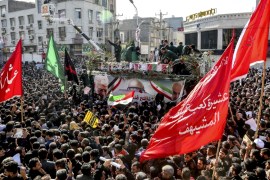 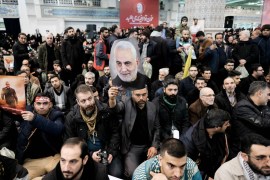 Tears, cries of vengeance as Tehran bids farewell to Soleimani

Sea of mourners dressed in black gather in Tehran to pay homage to revered general killed in US air strike. 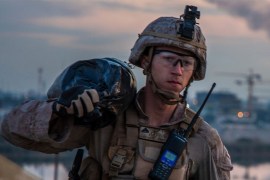 Trump ratchets up tension with aggressive rhetoric even as his administration says Soleimani killing was to stop war.