Washington, DC – The United States Senate is gearing up for a climactic vote on Friday that could bring a swift end to the impeachment trial of President Donald Trump.

“There is no need for more evidence to prove something that has already been proven and that does not meet the U.S. Constitution’s high bar for an impeachable offense,” Alexander tweeted on Thursday after the conclusion of two days of questions posed by senators to both legal teams.

A simple majority is needed for the Senate to call witnesses, but with Alexander siding with Republicans, it appeared the best the Democrats could hope for was a tie in the 100-member Senate. Two Republicans – Mitt Romney and Susan Collins – have said they will vote in favour of calling witnesses. That leaves one undecided senator, Lisa Murkowski, who said she will make her decision on Friday.

Even if the Democrats muster up enough votes for a tie, their chances of calling new witnesses still appear to be slim. In the event of a tie, Supreme Court Chief Justice John Roberts, who is presiding over the trial, could step in to break the impasse. But there is little precedent, and what would and could happen is still unclear. The Senate itself could override any decision that Roberts makes with a simple majority vote.

If Roberts declines to break a tie, the vote would be a defeat for Democrats.

Before a vote on witnesses, the Senate will hear four hours of debate on a general proposition about whether it is appropriate to seek interviews with witnesses or additional documents.

Bolton has been of particular interest, Democrats say, because he would have first-hand knowledge of Trump’s efforts to get Ukraine to announce investigations into the president’s political rival, Joe Biden.

The House of Representatives impeached Trump in December for abuse of power relating to his dealings with Ukraine and obstruction of Congress for refusing to participate in the impeachment investigation. Trump has denied any wrongdoing.

“We know why they don’t want John Bolton to testify,” lead house manager Adam Schiff said on Thursday from the Senate floor.

“It’s not that we don’t really know what’s happened here. They just don’t want the American people to hear it in all of its ugly, graphic detail.”

Republicans have argued that the Senate has heard enough to vote on whether to acquit or remove the president and adding any potential witnesses could drag the impeachment trial out for weeks, if not longer.

The White House has said it is hoping for a swift end for the trial.

“We’re interested in getting this to acquittal as quickly as possible,” said Eric Ueland, White House director of legislative affairs.

If the vote for witnesses fails, Republicans could move to end the trial swiftly on Friday or Saturday. It is unclear whether they will hold closed-door deliberations as was the case in the impeachment trial of former President Bill Clinton.

Democrats may try to prolong the final votes on each article of impeachment, however, by introducing motions and amendments. But ultimately Democrats are not expected to garner the two-thirds majority needed to convict and remove the president.

An acquittal would give Trump ammunition heading into the 2020 primary season, which kicks off with the Iowa caucuses on Monday. Trump would also likely use the acquittal as vindication as he prepares for his State of the Union address on Tuesday.

From Iowa on Thursday night, Trump railed against the Democrats and repeated his assertion the impeachment has been a “hoax”.

“They want to nullify your ballots, poison our democracy and overthrow the entire system of government,” Trump said.

But he also said: “This is a happy period for us. We call this Impeachment Light.”

Public opinion surveys show Americans are divided along partisan lines over whether Trump should be removed from office but majorities of 60 to 70 percent support calling witnesses. 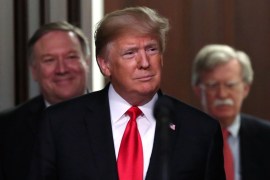 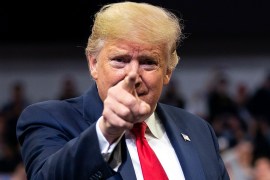 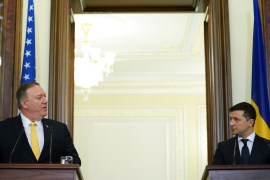 Pompeo pledges US support for Ukraine amid impeachment trial

US Secretary of State Mike Pompeo is the highest-ranking US official to travel to Ukraine since the impeachment began.