Beirut, Lebanon – Abu Khaled has never been to his hometown of Jaffa. His parents were expelled from the port city along with about 120,000 other residents when it came under Israeli control following the 1948 Arab-Israeli war.

They eventually settled in Beirut, in what is today the Shatila Palestinian Refugee Camp, where Abu Khaled was born in 1959.

The father of two said he would die a happy man if he could one day see the town of his ancestors. But under the “Peace to Prosperity” plan released by US President Donald Trump on Tuesday, that prospect appears remoter than ever.

Under the plan, also referred to as the “deal of the century”, the majority of the territory that is now Israel and the occupied West Bank would formally become part of the Israeli, with illegal settlements and the Jordan Valley annexed. The occupied Golan Heights would also be annexed to Israel.

A second entity, referred to as the “future state of Palestine”, appears on a conceptual map as an archipelago of disjointed territories connected by a number of roads and tunnels. It is wholly surrounded by Israel, except for a small sliver of territory in Gaza that borders Egypt.

The proposed Palestinian state does not include Jaffa, one of the oldest port cities in the world, to which roughly 15 percent of Palestinian refugees trace their heritage. Palestinians would have no right of return there under the plan.

Instead, Abu Khaled could remain in Lebanon, go to the new Palestinian state, or apply to resettle in a number of undisclosed countries that are part of the Organization for Islamic Cooperation.

He said the humiliation the proposal entails is too great for it to be taken seriously. “I’m very pessimistic, I don’t think we’ll ever go back in my lifetime,” he told Al Jazeera.

“Neither is Palestine going to be liberated by force – that’s all nonsense – nor will we go there as free people via airplane,” he said.

“This plan is rejected by everyone, all we can do is wait for something better.”

In response to the announcement of the plan, Palestinian refugee camps in Lebanon announced a general strike on Wednesday. Schools and shops were closed in at least two, including the biggest Palestinian camp, Ain al-Hilweh in southern Sidon.

“The US-Israeli conspiracy led by Trump and [Israeli Prime Minister Benjamin] Netanyahu will not pass, and will fail due to Palestinian opposition and the clear stance from Jerusalem and refugees,” Maher Shabaita, the local secretary-general of the Palestine Liberation Organization (PLO), said in a televised statement from Ain al-Hilweh.

While there were at one point roughly half a million Palestinian refugees in Lebanon, a 2018 survey found there were just some 175,000 living there now.

Conditions have long been difficult for Palestinians in a country that has imposed restrictions on everything from place of residence to the types of jobs they can perform, under an official policy that sees them as short-term guests even though most were born and raised in Lebanon.

“I feel more Lebanese than Palestinian – this doesn’t mean I would let Palestine go, but of course my life would change if I could get Lebanese citizenship,” 29-year old Abu Hasan told Al Jazeera.

Abu Hasan is ancestrally from the Palestinian town of Saffuriyeh, which was all but destroyed after it came under Israeli control in 1948.

Because he does not have Lebanese citizenship, Abu Hasan said he was fired from his job at a glass factory after his bosses feared being fined during a labour ministry crackdown on foreign workers.

Palestinians are prevented from working in dozens of professions, ranging from engineering and medicine to driving a taxi and fishing.

These restrictions forced Abu Khaled’s son, an engineer, to travel to Germany for work, while his daughter, who studied to be a pharmacist, has been unable to find a job. “As soon as they see ‘Palestinian’ on the CV, they decline,” he said.

Making matters worse, Lebanon is in the midst of its worst economic crisis in a generation, with scores of businesses closing down, hundreds of workers losing their jobs and thousands of salaries slashed.

“There is no mercy for Lebanese in Lebanon, so how do you think it is for us?” Abu Hasan said. “We’re stuck here as the country collapses, and I have no hope we’ll be able to leave. I will die here just like my father and grandfather.”

The restrictions on Palestinian participation in political and economic life in Lebanon have long been justified by successive governments on sectarian grounds. Palestinians are mostly Sunni Muslim, while Lebanon is roughly a third Sunni, a third Shia Muslim and a third Christian, and has a political system based on the representation of sects.

Christian groups have long opposed permanent Palestinian settlement in the country over fears it would curb their political influence.

This means the majority of Palestinians in Lebanon are forced to live in cramped camps with poor sanitation and public services, much like Beirut’s Shatila camp.

Inside, a thicket of electricity wires hangs between crumbling, pock-marked concrete buildings, many several-storeys high despite having no foundations.

Tarpaulins are draped over the electricity wires to shield the streets below from rain. The camp’s shallow sewage system overflows, putrid water spilling into alleyways crowded with stalls, motorcycle traffic and pedestrians.

Aside from its political dimension, the Trump proposal also includes an economic plan that offers tens of billions of dollars in funds to Palestinians and nations in the region that host Palestinian refugees, including Jordan, Egypt and Lebanon.

Half of the funds would come in the form of grants, the rest in subsidised loans and private investment.

The proposal does not specify the conditions under which this money would be unlocked.

The bulk of the money would go on improving Lebanon’s crumbling highways and building a rail network – with the potential for a “regional railway network” – collectively priced at $5bn, mostly in loans.

A further $1bn would go to expanding Beirut’s airport and seaports in Beirut and Tripoli.

Lebanon is badly in need of foreign help. It is the third-most indebted nation in the world as a percentage of gross domestic product (GDP) and a dollar shortage have made it increasingly likely Beirut will soon default on debt repayments.

Experts have said the country may need a $20-25bn bailout to emerge from the crisis.

President Michel Aoun called Palestinian President Mahmoud Abbas to personally convey his opposition to it, while new Foreign Minister Nassif Hitti told Sky News Arabia: “No one gives up their national identity in exchange for material temptations. The Palestinian people cannot be dispossessed in exchange for financial aid.” 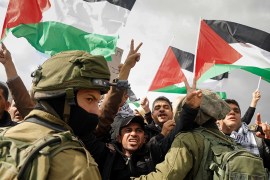 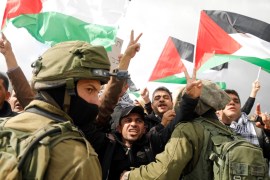