A gunman has fired at a protest rally against India’s new citizenship law near the Jamia Millia Islamia (JMI) university in capital New Delhi, witnesses and officials said.

The alleged assailant, identified by the police as a 17-year-old teenager, brandished a single-barrel weapon and shouted slogans against the protesters before firing at them, wounding a JMI student on Thursday.

The deputy commissioner of police in Southeast Delhi said the teenage suspect has been arrested and an investigation was being conducted into the incident.

“He [the gunman] was shouting, ‘Delhi Police Zindabad’ [long live Delhi police] and ‘Who wants Aazadi [freedom], come, I’ll shoot you’,” said witness Nazim Qazi, who was also part of the protest.

“And then he shot one fire. A student named Shadab was hurt and has been taken to the nearby Holy Family hospital,” he added.

Another witness told Al Jazeera that JMI students were marching towards the memorial of Mahatma Gandhi, the leader of India’s independence struggle, when the attack happened.

The march was organised to coincide with the death anniversary of Gandhi, who was shot dead by a member of the Hindu far right, Nathuram Godse, in 1948.

On the day Gandhiji was shot dead by Godse! https://t.co/4djBajqfmt

The victim has now been moved to the trauma centre of All India Institute of Medical Sciences (AIIMS) in New Delhi, sources said.

A photograph taken by the Reuters news agency showed the suspect, dressed in a black jacket and brandishing a single-barrel weapon, standing metres away from dozens of policemen deployed outside the university, where protesters had gathered for the march.

Witnesses said the assailant shouted slogans against the protesters before firing at them.

“The police stood nearby,” Ahmed Zahir, a witness, told Reuters.

Meanwhile, India’s Home Minister Amit Shah posted on Twitter that Delhi Police officials have been ordered to conduct a “detailed inquiry” into the incident.

Who is the suspect?

The suspect’s purported Facebook page, now suspended, showed that he called himself a “Rambhakt” (devotee of Hindu god, Lord Ram). He was live on Facebook just before the attack, the page showed.

The teenager’s Facebook account also revealed his apparent hatred towards Muslims and his sympathies for the ruling Bharatiya Janata Party (BJP).

His social media profile suggested he is a member of the far-right Bajrang Dal, the youth wing of the World Hindu Council, which forms a part of what is called the Sangh Parivar (Sangh Family) in India.

The Sangh Parivar is named after their parent organisation, the Rashtriya Swayamsevak Sangh (RSS or National Association of Volunteers), which draws its inspiration from the German Nazis.

On Thursday, hours before he shot at the JMI student, the suspect made several posts on his Facebook page, in which he threatened the protesters and asked his friends to follow his activities.

“Shaheen Bagh, tera khel khatm (your game is over),” read one of his posts, referring to a peaceful protest being led by women in a Muslim-dominated neighbourhood in New Delhi, a stone’s throw from where he incident happened.

Protests against the Citizenship Amendment Act (CAA), which fast-tracks Indian citizenship for non-Muslim minorities from three neighbouring countries, have flared since last December.

Prime Minister Narendra Modi’s government insists the law is required to help persecuted minorities who fled to India before 2015 from Afghanistan, Bangladesh and Pakistan.

However, protesters insist the law – as well as a proposed national register for citizens – discriminates against the country’s Muslim minority and violates India’s secular constitution.

In recent days, BJP leaders have called for action against the protesters, whom they call “anti-nationals”.

This week, India’s Minister of State for Finance, Anurag Thakur, encouraged supporters at a state election rally in New Delhi to chant slogans, calling for “the traitors to be shot”, drawing a reprimand from the country’s election commission.

Last month, Delhi police officers stormed the JMI library and beat students who were protesting against CAA. Dozens of students were injured in the police action that caused a public outcry.

Tawqeer Hussain contributed to this report from New Delhi 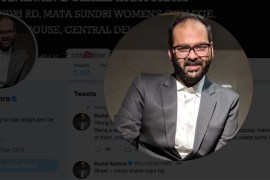 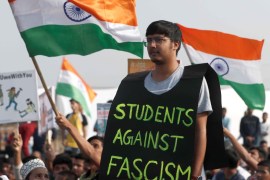 India’s democracy may not have much time left

The attack on Jawaharlal Nehru University shows that the ideological civil war in India has taken a new violent turn. 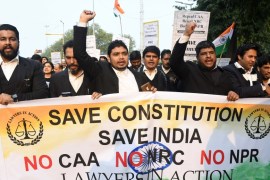