New York City, United States – In the weeks following the US killing of top Iranian commander Qassem Soliemani, fears of increased “Iranophobia” have gripped some in the Iranian-American community amid the escalation of tensions between Iran and the United States.

Iran fired more than a dozen missiles at Iraqi bases housing US troops earlier this month after the killing of Soliemani on January 3.

Responding to the attacks, the US announced it was imposing additional sanctions on Iran, including sanctions on eight Iranian officials it said were involved in “destabilising” activities in the Middle East.

Iranian Americans have watched the latest developments with concern for family and friends in Iran, but also with renewed fears of a backlash against their communities in the US.

“The spread of Iranophobia in western media is leading to our dehumanisation,” Monna Sabouri, an Iranian American, told Al Jazeera. “Iranian Americans are being stripped of their constitutional rights. And of our humanity.”

Immediately after the US assassination of Soleimani, cities in the US were on alert for possible retaliation.

It makes people feel scared to say they are Iranian in fear of how others might react because all over the news they are telling you that Iranians are terrorists and you should be afraid.

Despite the US Department of Homeland Security announcing there was “no specific, credible threat against the homeland”, officials in cities such as New York put out statements saying they were prepared to respond to any threats from Iran.

“We will have to be vigilant against this threat for a long time to come,” tweeted New York City Mayor Bill de Blasio immediately following the drone strike on Soleimani.

Law enforcement in Los Angeles stepped up patrols at potential targets, sources told local media, though they acknowledged there were no specific threats.

Such rhetoric and actions, Iranian Americans said, often unfairly puts them on the defence, and makes them targets for possible discrimination.

“Posts like this insinuate that Iran is a terrorist country and thus Iranians are terrorists,” Lily Tajaddini, an Iranian-American activist in Washington, DC, told Al Jazeera. “It makes people feel scared to say they are Iranian in fear of how others might react because all over the news they are telling you that Iranians are terrorists and you should be afraid.”

Tajaddini said she, too, believes this kind of rhetoric leads to the spread of Iranophobia.

“State officials say they take these actions to make our communities safer, but who is really safer when they are targeting members of their communities for being Iranian?” she asked. 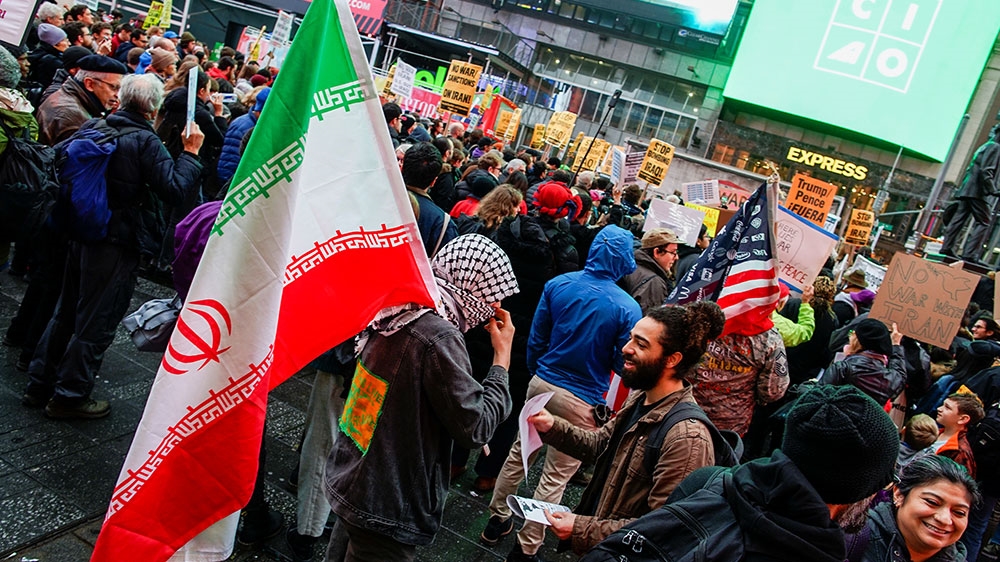 For some, the fear has become a reality, with reports of increased interrogation and visa denials for those trying to enter the US.

Last week, Mohammad Shahab Dehghani Hossein Abadi, a 24-year-old Iranian student enrolled in a university in Boston, Massachusetts, was deported despite a court order halting his removal. At least a dozen other Iranian students have been returned home despite having visas, US media reported.

Just after the killing of Soleimani, a group of dozens of Iranians and Iranian Americans were detained – some for up to 10 hours – at a border crossing in Blaine, Washington, and asked about their political affiliations.

At the time, US Customs and Border Protection (CBP) denied there was a directive specific to the detention of travellers of Iranian descent, but reports over the weekend cited a US lawyer who was reportedly contacted by a CBP agent who countered the official narrative.

For Iranian Americans who have been in the US during other times of escalation, such fears and experiences of “Iranophobia” bring up memories of a dark past.

“Such practices, even though infrequent, make this community worried that they are being typecast,” said Mehrzad Boroujerdi, an Iranian American and director of the School of Public and International Affairs at Virginia Polytechnic Institute and State University.

“For some of us old enough to have experienced mandatory fingerprinting during the Iranian hostage crisis of 1979-1980, there is a sense of discomfort emanating from a guilt-by-association mode of reasoning,” Boroujerdi told Al Jazeera, referring to US embassy student takeover in which 52 Americans were held hostage for 444 days in Tehran.

Reza H Akbari, a graduate student who was born in Iran but has US citizenship, said he has heard countless stories from his parents and grandparents about the way they were treated during the crisis and afterwards.

But he said things have gotten worse in recent times owing to social media and how easily false and alarmist information can be shared.

“There’s been an increase on social media unjustly and wrongfully asking Iranian Americans to prove their loyalty to the US,” he said, adding that these instances cause a lot of anxiety among a population where many consider the US their home, or at least their second home.

“To be forced like you don’t belong or getting questioned to prove a negative – that you are a good citizen and believe in the nation is something – that’s a big concern in the community,” he told Al Jazeera.

There are between 500,000 and one million people of Iranian descent living in the US, according to the US Department of State, with the largest concentration in Southern California.

In 2018, Trump withdrew the US from the landmark 2015 Iran nuclear deal, which tightly restricted Tehran’s nuclear programme in exchange for ending sanctions that had severely damaged its economy.

Trump has since established a “maximum pressure” policy towards Iran, including the reimposition of sanctions, and tensions between the two countries have mounted.

“There are those folks who are very directly connected to that trauma of 1979, and for that generation, in particular, that trauma and the anger they feel about that is what drives them the most,” Kharrazi told Al Jazeera. “The group that would talk of regime change at any cost; for them, it’s not a question of the Trump administration, but they just want someone who is hard on Iran.”

But for those who grew up in the US, the concerns are different.

“We’re very much alarmed and afraid of this all turning into a huge trauma for the generation of young people who are growing up now in the US,” Kharrazi said.

“People are going to school in a climate full of World War III memes [that] all their classmates are joking about, and for them, it’s not a joke, it’s about their grandparents and their relatives and this identity they don’t fully understand yet,” she said about Iranian-American students having to go to school in the immediate aftermath of the crisis.

Kharrazi is not alone with her concerns. Los Angeles-based writer and producer Mahyad Tousi felt a similar fear about his seven-year-old son returning to school amid these conversations.

Tousi, who was born in the US and then lived in Iran for a few years before returning at the age of 13, remembers coming back to a country in 1986 that was suddenly very hostile to his Iranian identity.

He had to sit down with his son to explain what’s going on before sending him to school at the start of the year.

“It became very visceral to me, that feeling,” he told Al Jazeera about having his own childhood trauma come back in light of the situation. “People know he’s Iranian, he’s wearing it on his sleeve, he’s proud of it culturally and talks about it a lot and … you throw something like this at the situation and all of a sudden that thing that you love, and that’s a part of you that you understand as one half of your identity, becomes the part that people attack you about.”

As for the Iranophobia experienced by some, Tousi says he has experienced it his entire life, so there was no specific uptick he has personally felt.

But the differences in experience for different Iranians is perhaps what most accurately represents the Iranian-American community’s diversity in terms of their opinions about the current situation.

The Iranian-American community is a rather large and diverse community and the track record of the has helped to create cleavages among this community.

Even for the most laid-back critics, the latest escalation has them on edge.

An Iranian-American student at Syracuse University in New York said this time around, many who usually “hold back” are now expressing their fears.

The student, who wished to remain anonymous due to security concerns, was born and raised in Syracuse.

“I look to them to see whether I’m panicking too much, but it seems like everybody is pretty much scared right now and it’s still uncertain,” the student said. “It feels like overnight something really big happened.”

Meanwhile, experts such as Akbari warn that it is important for policymakers to acknowledge that the Iranian-American community is huge, and has differing opinions, and that overgeneralisation and treatment of the community with one school of thought only causes more problems.

“From the get-go, it seems like the nuances of the community that are living in the US is completely missed by decision-makers in the US,” Akbari said.

“The Iranian-American community is a rather large and diverse community,” he said, “and the track record of the Islamic Republic has helped to create cleavages among this community.”