Street children in Rwanda’s capital, Kigali, are being arbitrarily detained and abused at a holding centre, according to Human Rights Watch (HRW).

The New York-based rights group said in a report on Monday that vulnerable minors held in the facility, known as the Gikondo Transit Centre, were regularly beaten and exposed to overcrowded and unhygienic conditions.

Johnston Busingye, Rwanda‘s minister of justice, denied the accusations made in the HRW report, describing Gikondo as a “rehabilitation” centre set up to provide children with skills and “protection”.

“The children come from broken families. The Rwandan government decided to invest a lot of money to get children off the streets. We are trying to create a future for some people,” he told Al Jazeera.

HRW said its 44-page report was based on 30 interviews conducted between January and October 2019 with children aged 11 to 17 who were formerly detained in Gikondo for periods of up to six months.

Twenty-eight of the interviewees said they were beaten, according to HRW. Children were also quoted as saying that they had to share mattresses and blankets, which were often infected with lice, while access to medical care was sporadic.

HRW also said that children were held at Gikondo without judicial oversight or due process, while none of the interviewees were given access to a lawyer, guardian or family member.

Under legislation introduced in  2017, people showing  “deviant behaviours … such as prostitution, drug use, begging, vagrancy, [or] informal street vending,” can be held in transit centres for up to two months, without any other further legal justification or oversight, HRW said.

According to the law, transit centres are “premises used for accommodating on a temporary basis” people who may then be transferred to a rehabilitation centre, defined as “premises used for the conduct of activities dedicated to reforming, educating and providing professional skills and reintegrate any person exhibiting deviant acts or behaviours”.

“But instead, they are locking them up in inhuman and degrading conditions without due process, and exposing them to beatings and abuse.”

According to HRW, violations occur as soon as the children are rounded up off the streets.

“The police beat me up and tried to force me into the truck. I hurt my wrist, I had to wait three days before seeing a doctor … They just bandaged my arm,” a 15-year-old boy living on the streets in Nyagatare District, who was arrested in September 2018, was quoted as saying by HRW.

In its report, HRW urged the United Nations Committee on the Rights of the Child, which is due to review Rwanda’s compliance with the Convention on the Right of the Child, to call for the immediate closure of the centre.

Rwanda ratified the convention in 1991.

The convention has been ratified by 196 countries, which are required to undergo regular reviews by the UN committee that is comprised of 18 independent international experts.

“The UN child’s rights committee has an opportunity to do what few in Rwanda can do by asking the government tough questions about its human rights record and systematic treaty violations,” Mudge said.

“It should stand by children facing abuse, who deserve to be treated with dignity and respect.” 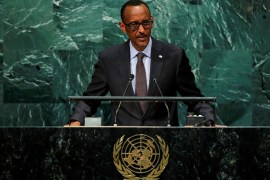 There is evidence of torture and abuse of civilians in detention which the Rwandan government cannot deny. 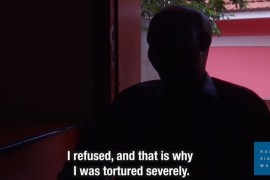 Al Jazeera speaks to researcher urging a probe of torture claims by detainees accused of crimes against state security.