China said on Monday that the death toll from a deadly coronavirus outbreak jumped to 81 as the hard-hit province of Hubei announced 24 new fatalities and expanded measures to keep people at home during what is usually the country’s biggest holiday season.

A national tally of verified infections rose by 769, about half of them in Hubei, the National Health Commission said. It said 461 of those infected were in a serious condition.

China has sealed off Hubei in the country’s centre, an unprecedented operation affecting tens of millions of people which is intended to slow the transmission of the respiratory virus.

The end of the Lunar New Year holiday, China’s busiest travel season, was pushed back to Sunday from Friday to “effectively reduce mass gatherings” and “block the spread of the epidemic”, a cabinet statement said. Schools will also postpone reopening until further notice, it added.

Cases have been confirmed in the semi-autonomous territories of Macau and Hong Kong, where the government is turning holiday camps into quarantine centres.

The previously unknown contagion has caused global concern because of its similarity to the Severe Acute Respiratory Syndrome (SARS) pathogen, which originated in China in 2002 and went on to kill hundreds of people not only in mainland China but also in Hong Kong and further afield.

Al Jazeera’s Adrian Brown, who reported on the SARS virus, said that while it did appear that China was now being more open in some ways not much had changed.

“We know the virus in Wuhan began to appear at the end of November but it was not until the end of December that officials notified the WHO, and it was only after Xi Jinping said he wanted full transparency that all this data began to be released,” Brown said from Hong Kong. 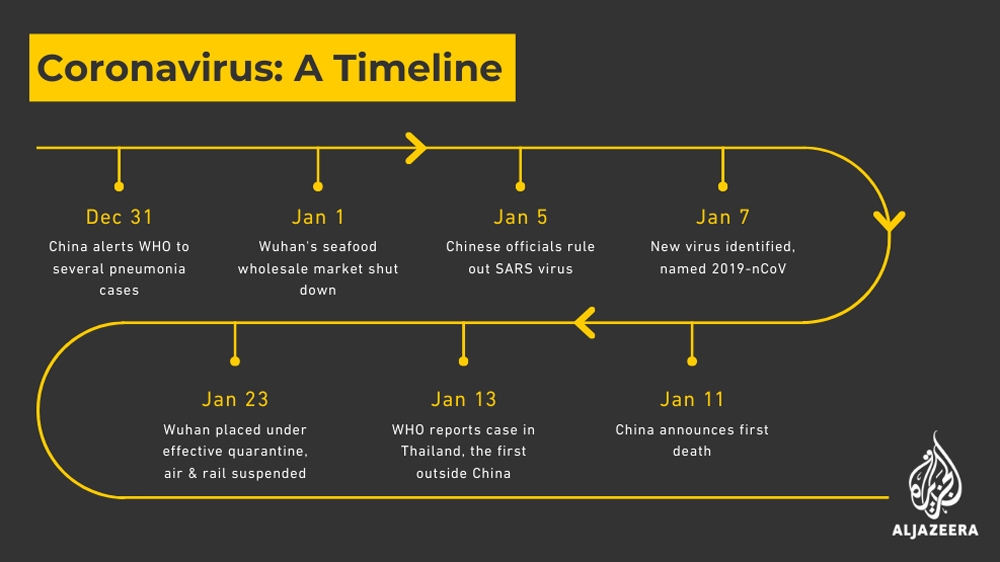 Censorship had fed deep scepticism about the information being released, he added.

Drastic travel restrictions have been imposed beyond the epicentre, with Shandong province and four cities – Beijing, Shanghai, Xian and Tianjin – announcing bans on long-distance buses entering or leaving.

The densely populated southern province of Guangdong, Jiangxi in central China and three cities made it mandatory for residents to wear face masks in public.

The virus is thought to have originated in a seafood market that also sold wild animals in Hubei’s capital of Wuhan towards the end of last year.

The government said in a statement on Monday that Premier Li Keqiang had visited the city to inspect the ongoing efforts to contain the epidemic and spoke with patients and medical staff.