In just two hours, lawyers for United States President Donald Trump told senators on Saturday that Democrats’ efforts to remove the president from office would set a “very, very dangerous” precedent in an election year.

It was the first day of their opening arguments in the Senate impeachment trial of Trump.

White House Counsel Pat Cipollone, the head of the defence team, told senators they would be denying voters their right to give their opinion on Trump at the November 3 presidential election if they found him guilty and remove him now.

Democrats argued earlier this week that Trump should be removed for encouraging Ukraine to interfere in the election by pressuring its leader to dig up dirt on former Vice President Joe Biden, a leading 2020 Democratic presidential contender.

The defence tried to turn that argument of election interference against the Democrats by warning against removing a president less than 10 months before the American people will vote on whether to give him a second term.

The Democratic-led House of Representatives impeached Trump last month on charges of abuse of power and obstruction of Congress, setting the stage for the trial in the Republican-led Senate.

Trump is expected to be acquitted in the Senate, where a two-thirds vote is required to convict and remove a president from office. No Republican senator has voiced any support for his removal.

The main focus of the Democrats’ case is a phone call last July in which Trump pressed Ukrainian President Volodymyr Zelenskyy to investigate Biden on unsubstantiated corruption allegations.

Democrats contend that Trump was trying to find dirt on Biden and his son, Hunter, who had served on the board of a Ukrainian gas company, to help the president win a second term.

Democratic Representative Adam Schiff, the head of the prosecution, told senators this week that the campaign of pressure on Ukraine was a “corrupt scheme” in which Trump also temporarily froze nearly $400m in military aid to Ukraine. 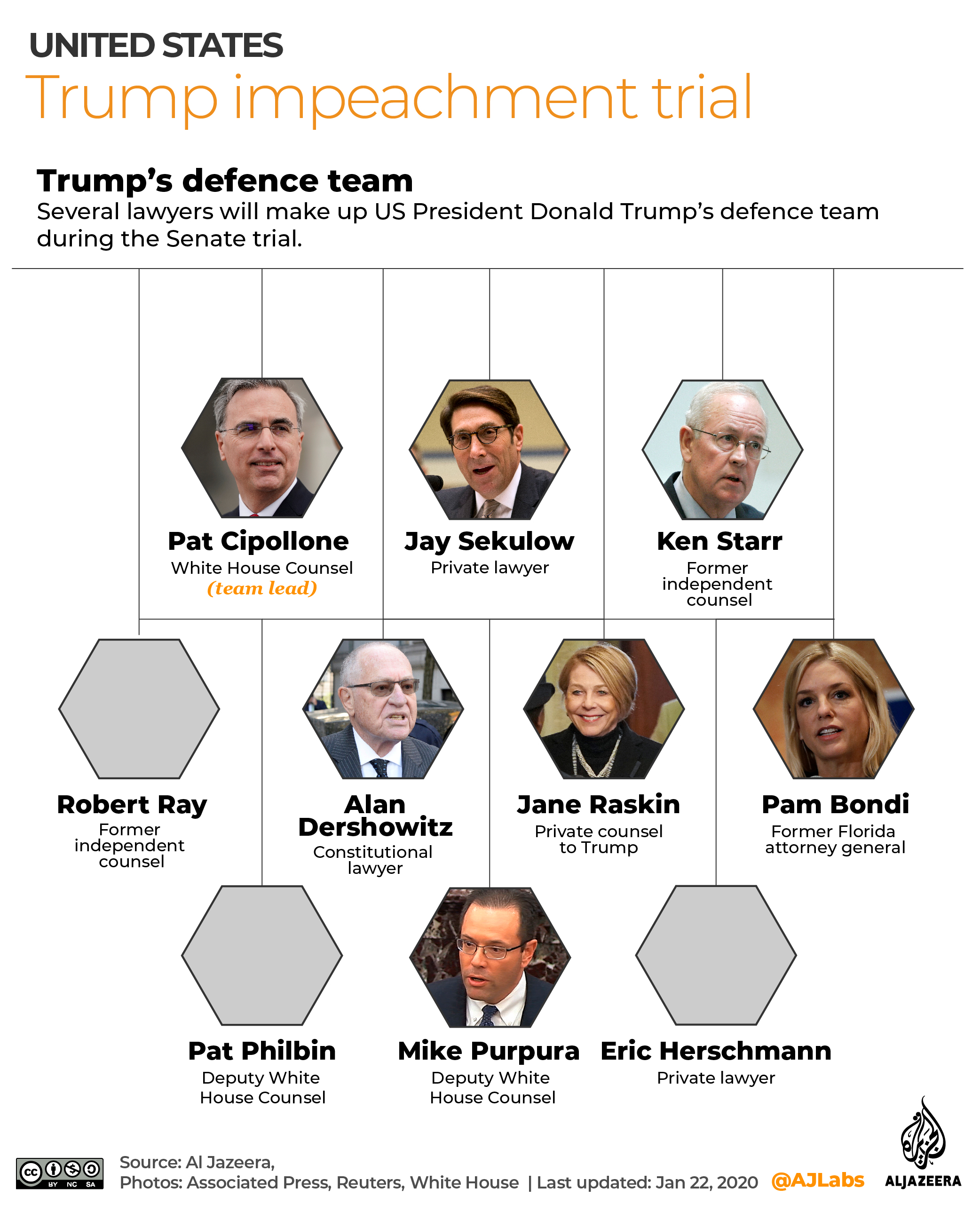 Trump is also charged with obstructing Congress by telling administration officials to ignore requests to testify or produce documents for a House inquiry into the Ukraine affair.

Cipollone said taking Trump off the ballot in November would mean having to “tear up all of the ballots across this country on your own initiative, take that decision away from the American people.”

“They are asking you to do something very, very consequential and, I would submit to you … very, very dangerous,” he said.

In wrapping up the opening arguments on Friday, Schiff warned that Trump would abuse his power again unless he is removed from office and urged Republican senators to show “real political courage” and support a Democratic motion later in the trial for more witnesses.

Trump’s team also made some claims on Saturday that Democrats say are false, including the assertion that the president’s lawyers were shut out of the impeachment inquiry.

That claim came despite the fact that a formal invitation was extended to Trump’s White House lawyers, who rejected the initiation.

Cipollone in a letter on December 6 told the House Judiciary Committee that “House Democrats wasted enough of America’s time with this charade” and Trump’s team did not participate in the hearings.

The first round of hearings, by the House Intelligence Committee, was not opened to participation by Trump’s team. Republicans on the three committees conducting the investigation, however, were allowed to participate. Those hearings resembled the investigative phase of criminal cases when the subject of the investigation is ordinarily not brought in. Trump complained about not being invited, then said no when the next panel invited him.

An important question that the Senate must still answer is whether witnesses will be called. Before opening arguments kicked off, the Republican-led chamber voted down nearly a dozen amendments to the Senate’s rules that would have subpoenaed individuals and documents to be included in the trial.

Speaking to reporters after Saturday’s session, Senate Minority Leader Chuck Schumer said Trump’s lawyers “did something they did not intended. They made a really compelling cause for why the Senate should call witnesses and documents”.

Most Republicans have solidified around the argument that the House should have sued for the witnesses who refused to testify on Trump’s orders, rather than looked to the Senate to compel their testimony. Others have suggested that the case has not been convincing enough.

It would take four Republican senators to join the Democratic minority to seek witnesses, and so far the numbers appear lacking.

According to a new poll from The Associated Press-NORC Center for Public Affairs Research, about seven in 10 respondents – including majorities of Republicans and Democrats – said Trump should allow top aides to appear as witnesses. The poll showed the public slightly more likely to say the Senate should convict and remove Trump from office than to say it should not, 40-45 percent. But a sizable percentage, 14 percent, said they didn’t know enough to have an opinion.

Saturday’s session was a relatively short one because Republicans want to save the bulk of their arguments for early next week when they expect television viewership to be higher.

Rules passed by the Republican-led Senate give each side up to 24 hours over three days to present opening arguments, though Trump’s defence team has said it likely will not use its time.

Before Monday, expect Trump’s critics and defenders to take to Sunday morning US political talk shows to continue making their cases for and against the president.

Trump is only the third US president to be impeached. No president has ever been removed from office through impeachment, a mechanism the nation’s founders – worried about a monarch running the US – devised to remove a president for “treason, bribery or other high crimes and misdemeanours.” One, Richard Nixon, resigned in the face of a looming impeachment.