China has expanded its coronavirus lockdown to more cities, restricting movement to an unprecedented 56 million people as it rushes to build a prefabricated, 1,000-bed hospital for victims.

Meanwhile, the death toll from the outbreak continues to rise, casting a pall over Lunar New Year, the country’s biggest holiday.

The number of confirmed cases of coronavirus across China climbed sharply to more than 1,287, with at least 41 deaths reported as of Saturday morning.

At least five cases were also reported in Hong Kong, two in Macau, and three cases in Taiwan.

As the death toll continued to rise, China’s National Health Commission announced on Saturday nationwide measures to identify suspected cases of the deadly virus on trains, aeroplanes and buses.

Inspection stations will be set up and passengers with suspected pneumonia must be “immediately transported” to a medical centre, the statement said.

In the southern city of Haikou, the city government also announced that that it would start a 14-day centralised medical observation for all tourists coming from Hubei province, the epicentre of the virus.

Tourists from Hubei, especially from Wuhan city, are not allowed to leave the hotel where the medical observation will be held during the 14-day period, the announcement said.

At least 450 additional military medical staff were deployed to Hubei to help with the treatment.

In a news conference in Melbourne, Victoria’s Health Minister Jenny Mikakos said a Chinese man in his 50s who last week returned from China had contracted the newly identified coronavirus.

In Malaysia, the health ministry announced on Saturday that three people have been infected with the virus.

Xinhua news agency also reported one case in Nepal, involving a student from Wuhan. He reportedly arrived in Nepal on January 5 and visited the hospital on January 13.

Elsewhere, France announced late on Friday its third case of the virus – the first cases in Europe. And the United States reported its second case, involving a Chicago woman in her 60s who was hospitalised after returning from China.

A total of 18 cities in central Hubei province now have some sort of travel restrictions affecting 56 million people.

The rules include closing public transport links and access to highways in the cities, local authorities said.

In Beijing and other Chinese cities, authorities cancelled many public celebrations and other events marking the Lunar New Year, which falls on Saturday.

Hospitals in Wuhan grappled with a flood of patients and a lack of supplies.

Videos circulating online showed throngs of frantic people in masks lined up for examinations, with some complaining their family members were turned away at hospitals that were at capacity.

Authorities in Wuhan and elsewhere put out calls for medicine, disinfection equipment, masks, goggles, gowns and other protective gear.

“I don’t think this virus has been properly controlled,” a woman in Beijing told Al Jazeera’s Scott Heidler. “I am very afraid of getting infected.”

Wuhan authorities said they are rapidly constructing a new hospital to deal with the crisis, to be completed by February 3.

It will be modelled on a SARS hospital that was built in Beijing in just six days during the SARS outbreak.

The seriousness of the crisis was still an open question.

It was not clear just how lethal the virus is, or even whether it is as dangerous as ordinary flu, which kills tens of thousands of people every year in the US alone.

Scientists say it is also not clear if it spreads as easily as SARS, its genetic cousin, which also originated in China and killed about 800 people in 2002-2003.

The rapid increase in reported deaths and illnesses does not necessarily mean the crisis is getting worse. It could instead reflect better monitoring and reporting of the newly discovered virus, whose symptoms can initially resemble those of the cold and flu, including cough, fever and shortness of breath, but can worsen to pneumonia.

“It’s still too early to draw conclusions about how severe the virus is because, at the beginning of any outbreak, you would focus more on the severe cases,” said Tarik Jasarevic, a spokesman for the World Health Organization in Geneva.

“And then maybe we are missing some mild cases because people will just be a little bit sick and will not have it tested. And they will recover.”

With authorities afraid that public gatherings will hasten the spread of the virus, temples locked their doors while Beijing’s Forbidden City, Shanghai Disneyland and other major tourist destinations were closed.

People cancelled restaurant reservations before the Lunar New Year, normally a time of family reunions, sightseeing trips, fireworks displays and other festivities in the country of 1.4 billion people.

Wuhan’s usually bustling streets, malls and other public spaces were quiet on the second day of its lockdown, and masks were mandatory in public.

Shoppers emptied store shelves, stocking up for what could be an extended period of isolation. Karaoke bars, movie theatres and internet cafes around the region were shut down.

While most of the deaths have been older patients, a 36-year-old man in Hubei died on Thursday.

The vast majority of cases have been in and around Wuhan or involved people who visited the city or had personal connections to those infected.

Many countries are screening travellers from China and isolating anyone with symptoms.

Recalling the government’s initial cover-up of SARS, many Chinese are suspicious of the case numbers reported by officials. Authorities have promised transparency.

China’s cabinet, the State Council, announced it will be collecting information on government departments that have failed in their response to the outbreak, including “delays, concealment and under-reporting of the epidemic”.

“Please believe in China,” the hosts said. “With the most transparent public information … on the battlefront of the epidemic, we will definitely win.” 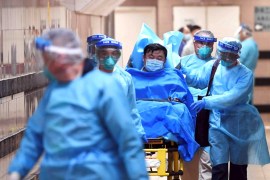 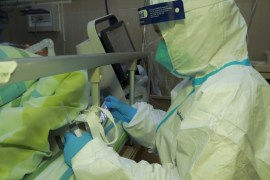