Philippine President Rodrigo Duterte warned the United States late on Thursday that he would cancel an agreement on the deployment of American troops and equipment for exercises, if Washington did not reinstate the visa of a political ally, who oversaw his deadly war on drugs.

Visibly upset, Duterte vented his anger over the US decision to deny entry to Ronaldo dela Rosa, a former police chief who is now a senator.

Dela Rosa said the US embassy in the Philippines did not explain why his visa had been cancelled but that he believed it was most likely because of allegations of extrajudicial killings during his more than two-year term as police chief.

Dela Rosa was the chief enforcer of Duterte’s anti-narcotics crackdown, which has resulted in deaths of more than 5,000 people, mostly small-time drug dealers. Police say victims were shot by officers in self-defence.

Human rights watchdogs, however, said the death toll in the drug war could be as high as 27,000. They also said many were defenceless victims.

“If you do not do the correction, one, I will terminate the bases, the Visiting Forces Agreement (VFA). I will finish that son of a bitch,” Duterte said in a wide-ranging speech before former Communist rebels.

“I am giving the government and the American government one month from now.”

The Visiting Forces Agreement (VFA), signed in 1998, accorded legal status to thousands of US troops who were rotated in the country for regular military exercises and humanitarian assistance operations.

The VFA replaces a previous long-standing agreement, which allowed US naval and air bases in the Philippines for decades.

The US and the Philippines conduct between one to two joint military exercises annually. In October 2019, there were an estimated 1,400 US Marines who participated in a military exercise with 600 Filipino troops.

Delfin Lorezana, Duterte’s defence minister, declined to comment when asked if he agreed with the president’s plan.

Duterte makes no secret of his disdain for the US, and what he considers its hypocrisy and interference, though he acknowledges that most Filipinos and his military have high regard for their country’s former colonial ruler.

The US is the Philippines’s biggest defence ally and millions of Filipinos have relatives who are American citizens.

Last month, Duterte banned US senators Richard Durbin and Patrick Leahy from visiting the Philippines after they introduced a provision in the US Congress.

The provision calls for banning entry to the US to anyone involved in locking up Philippine senator Leila de Lima, a former justice minister and Duterte’s top critic who was jailed in 2017 on drug charges after leading an investigation into thousands of deaths during the anti-narcotics campaign.

In an interview with Al Jazeera, de Lima called the charges “bulls**t”.

She has won numerous awards from human rights groups, which consider her a prisoner of conscience.

The US Embassy in Manila could not immediately be reached for comment outside office hours. 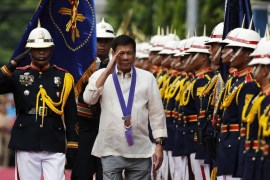 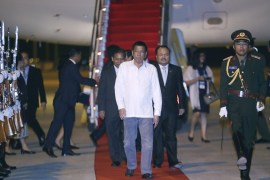 Duterte: If my plane explodes, you can ask the CIA

In an expletive-filled tirade, Philippine president also accuses the US government of lacking ‘word of honour’. 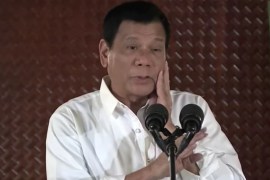