Canberra, Australia – Australia’s worst-ever bushfires have thrust climate change into the political spotlight, but one of the country’s most powerful media conglomerates continues to deny the links between extreme weather events and climate change: Rupert Murdoch’s News Corp.

On January 2, following weeks of horrific losses and fatalities, newspapers around the world put Australia’s bushfires on their front pages.

But in Australia, The Australian – News Corp’s flagship newspaper – dedicated its front page to a photo of a new year’s day picnic, and its tabloid Herald Sun relegated the story to page four.

At that point, eight people had died in the bushfires, mass evacuations were underway from Victoria’s East Gippsland region, and the New South Wales (NSW) south coast had seen whole villages wiped out.

It is now believed that 28 people have died in the bushfires across three states since September 2019. More than a billion animals have been killed, over 2,000 houses lost, and at least 10 million hectares (24.7 million acres) burnt.

The company also owns some of the world’s most influential television channels, including Sky News in Australia and the UK and Fox News in the US. Fox News is US President Donald Trump’s favoured television station.

Murdoch’s papers in Australia are known for their conservatism, and their columnists frequently rage about the threat posed to the country by immigration, Muslims, and increasing recognition of LGBTQ rights.

The Australian’s associate editor once said that climate change was “not the era’s burning issue”, and the paper published an article that argued climate change activists were “global catastrophists” and part of a “socialist plot”.

The Australian public is largely in support of taking more action on climate change.

According to the 2019 Climate of the Nation survey, 61 per cent of Australians believe that climate change is caused by humans and 64 per cent think the country should have a national target for net zero emissions by 2050.

“There is already a strong, broad sentiment in Australia about the increasing importance of reducing emissions,” science communicator Ketan Joshi told Al Jazeera earlier this month.

Even James Murdoch, the younger son of the 88-year-old media mogul, publicly criticised News Corp and Fox Corporation’s coverage of climate change this week via a statement with his wife.

James Murdoch is the former CEO of 21st Century Fox and currently sits on the News Corp board of directors.

“[James and Kathryn Murdoch] are particularly disappointed with the ongoing denial of the role of climate change among the news outlets in Australia, given obvious evidence to the contrary,” the spokesperson said.

Journalism academic and media expert Margaret Simons believes it is significant that the younger Murdoch has spoken out.

“It’s rare that the Murdoch family criticise each other in public,” she told Al Jazeera. “The fact that the came out so strongly is significant and sent a bit of a shockwave through News Corp in Australia.”

“There are many people out there – and we know this from the 2019 federal election – who are very ill-informed,” she explained.

“They are reading this content and believing it, and they agree with Murdoch that we should be focusing on creating more jobs.”

Earlier this month, a News Corp finance manager sent an incendiary email as she resigned that was addressed to chairman Michael Miller and copied to all staff.

“I find it unconscionable to continue working for this company, knowing I am contributing to the spread of climate change denial and lies,” the woman wrote.

She described the news reports that came out of The Australian, The Daily Telegraph and Herald Sun as “irresponsible” and “dangerous”.

The email was reportedly removed from staff inboxes within an hour.

Faced with increasing criticism, The Australian published an editorial on 11 January, denying that it misrepresented the facts on climate change.

“The evidence of global warming since the Industrial Revolution is clear,” the editorial said, before going on to blame “progressive elites” for overlooking “the hard work of persuasion and coalition-building” that is needed on climate change.

News Corp did not respond to requests for comment from Al Jazeera.

Forde of Griffith University has conducted research on media coverage of climate change. She said one problem at News Corp is that its media outlets do not take the reality of climate change as their starting point.

“We tend to think that everything is up to editors, but this is clearly not true. The tone set by the owners of media organisations does in fact have a big impact on content,” she said.

In 2019, Rick Morton, at the time employed by The Australian, said “We kind of know what the editorial line is at the paper… It’s not always a Murdoch line; it’s just that Murdoch hires editors who are very much like him.”

Simons. the journalism academic, predicts that the longer the debate continues, there will be more resignations from News Corp journalists.

“Some of the Australian’s best journalists have been leaving [News Corp] in the last 18 months and some have been very vocal about the reasons why,” she said.

“For any journalist who is early on in their career, they’d have to ask themselves whether they really want to belong to an organisation which is not contributing to a positive fashion to the defining debate of our times.”

“It will become harder for News Corp to get good journalists to work for them, and this will change the culture.”

There have long been concerns about the Murdoch empire’s domination of the Australian media, which led to a government inquiry in 2011, after a phone hacking scandal at the Murdoch-owned News of the World in the UK.

The review found that existing self-regulation mechanisms were insufficient to ensure accountability by media outlets, and recommended that a News Media Council be established to set journalistic standards.

“No-one else is publishing work like News Corp,” Forde explained. “They argue that it’s under the guise of ‘we’re the only ones who are balancing the reporting’.”

“It’s part of their political and ideological narrative that natural disasters like bushfires have always happened, and if they admit they’re out of the ordinary, then they’re accepting that climate change is real. So they play it down and employ [writers with] quite extreme views.”

“More people are talking about the ‘Murdochracy’ and the significant impact that he and his organisations are having on debate, as well as the diversity of public debate and the spreading of false information,” she said.

Change will probably require an economic threat to Murdoch’s outlets, however.

“Editorial positions would need to change for their views to change, and the direction needs to come from Rupert or Lachlan Murdoch themselves,” Forde concluded. “They would need to see that they’re losing readers, advertisers or shareholders as a result of their current views for there to be a shift.”

Simons agrees change will take time. “There was a reshuffle of editors in late 2019, but there has been no sign of an appetite for cultural change,” she said.

“If anything, it was a reinforcement of the existing culture.” 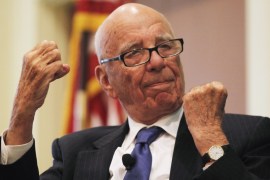 The Murdoch empire strikes back

We examine Rupert Murdoch’s relationship with the UK government; plus, Nigeria’s ‘brown-envelope’ journalists. 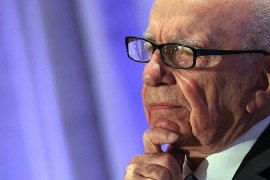 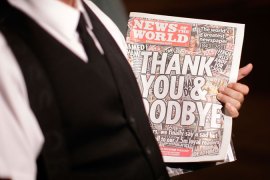 The newspaper conglomerate is not only behind smear campaigns against the Palestinian cause, it supports corruption.