US House Democrats opened marathon arguments in President Donald Trump‘s impeachment trial on Wednesday, trying to convince sceptical Republican senators to join them in voting to remove Trump from office to “protect our democracy”.

Trump’s lawyers sat by, waiting their turn, as the president blasted the proceedings from afar, threatening jokingly to face-off with the Democrats by coming to “sit right in the front row and stare at their corrupt faces”.

The challenge before the House managers is clear. Democrats have 24 hours over three days to prosecute the charges against Trump, trying to win over not just fidgety senators sitting silently in the chamber but an American public, deeply divided over the president and his impeachment in an election year.

Representative Adam Schiff, chairman of the House Intelligence Committee, outlined what the Democrats contend was the president’s “corrupt scheme” to abuse his presidential power and then obstruct Congress’ investigation. He then called on senators not to be “cynical” about politics, but to draw on the intent of the nation’s Founding Fathers who provided the remedy of impeachment.

“Over the coming days, we will present to you – and to the American people – the extensive evidence collected during the House’s impeachment inquiry into the president’s abuse of power,” said Schiff standing before the Senate. “You will hear their testimony at the same time as the American people. That is, if you will allow it.”

The trial marks just the third time the Senate has weighed whether a US president should be removed from office.

Democrats argue Trump abused his office by asking Ukraine to investigate political rival Joe Biden while withholding crucial military aid, and also obstructed Congress by refusing to turnover documents or allow officials to testify in the House probe. Republicans have defended Trump’s actions and cast the process as a politically motivated effort to weaken the president in the midst of his re-election campaign.

While polling suggests widespread agreement that Trump should allow top aides and former aides to appear as witnesses at the trial, that possibility seems remote.

Wrangling over rules for the trial stretched past midnight Tuesday night, with Republicans shooting down one-by-one Democratic efforts to get Trump aides including former national security adviser John Bolton, Secretary of State Mike Pompeo, and acting chief of staff Mick Mulvaney, to testify.

Senators are likely to repeat those rejections next week, shutting out any chance of new testimony.

One longshot idea to pair one of Trump’s preferred witnesses – Biden’s son Hunter Biden – with Bolton or another that Democrats want was swiftly rejected.

Chief Justice John Roberts opened Wednesday’s session as senators settled in for the long days ahead.

Most senators sat at their desks throughout, as the rules stipulate, though some stretched their legs, standing behind the desks or against the back wall of the chamber.

Freshman Representative Jason Crow, a House impeachment manager, had trouble holding the attention of senators, who by Senate rules were sitting in silence without access to phones or other electronics. Many senators left their seats and headed to nearby cloak rooms, or stood in the back or openly yawned as Crow talked about Trump’s hold on military aid to Ukraine. At one point, more than 10 senators’ seats were empty.

Crow, a military veteran who tried to emphasise the importance of the delayed aid to Ukraine, noticed the unusual level of activity, telling Chief Justice John Roberts at about 5pm (22:00 GMT) that he saw a lot of senators moving about. He wondered aloud if the Senate wanted to take a recess. Roberts urged him to continue, and McConnell announced the Senate would not break until 6:30pm (23:30 GMT) for dinner.

Just before dinner, Capitol police swiftly grabbed and dragged out of the chamber a man in the visitors’ gallery who was yelling. As he was being held in a hallway outside the chamber, the gray-haired man could be heard shouting: “Dismiss the charges!” He also yelled: “You’re hurting me!” as police subdued him.

Trump, who was in Davos, Switzerland, attending a global economic forum, praised his legal team, and suggested he would be open to his advisers testifying, though that seems unlikely. He said here were “national security” concerns that would stand in the way.

Trump ended his day going on a tweeting frenzy, breaking his presidential record of 123 tweets and retweets in one day.

After the House prosecutors present their case, the president’s lawyers will follow with another 24 hours over three days. They are expected to take only Sunday off.

“There’s a lot of things I’d like to rebut,” said Trump lawyer Jay Sekulow at the Capitol, “and we will rebut”.

And, for your information, we have a record as of 4:25 pm on @realDonaldTrump. The most tweets of his presidency at 125 and counting. The most retweets ever at 110 and counting. Closing on the all time record set in 2015… pic.twitter.com/V9hLmN2lEu

Then there will be 16 hours for senators, who must sit quietly at their desks, no speeches or cellphones, to ask written questions and another four hours for deliberations.

The impeachment trial is set against the backdrop of the 2020 election. All four senators who are Democratic presidential candidates are off the campaign trail, seated as jurors.

Campaigning at stops in Iowa, former Vice President Joe Biden also rejected having his son testify, or even appearing himself. “I want no part of that,” he said.

Ahead of opening arguments, senators, particularly Republicans, were alternately restless, bored and exhausted by the proceedings.

Republican Senator Joni Ernst of Iowa spoke sarcastically about how excited she was to hear the “overwhelming evidence” the House Democrats have against Trump. 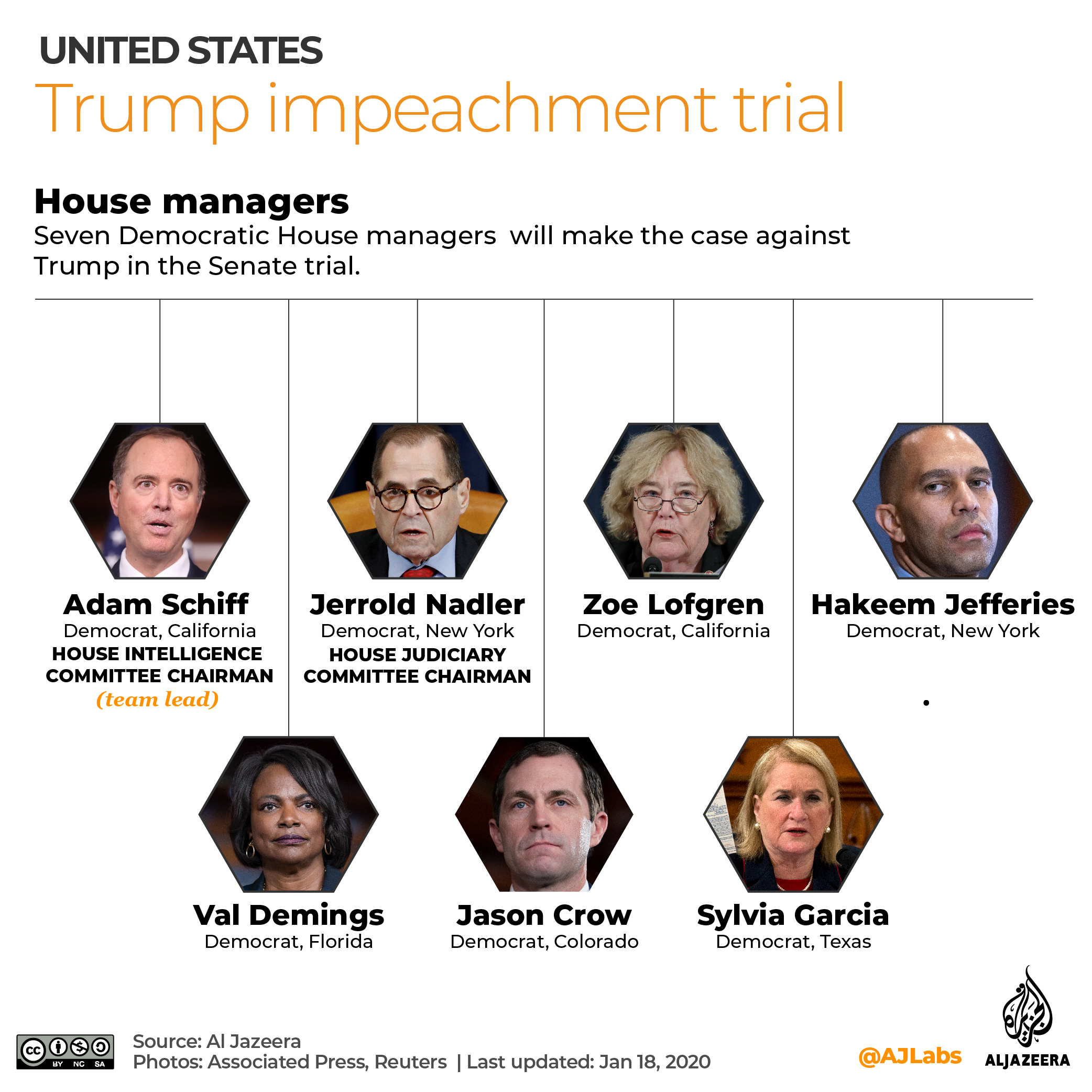 Republicans are eager for a swift trial. Yet Trump’s legal team passed on an opportunity to file a motion to dismiss the case on Wednesday, an acknowledgement that there were not enough Republican votes to support it.

The White House legal team, in its court filings and presentations, has not disputed Trump’s actions. But the lawyers insist the president did nothing wrong.

A new poll from The Associated Press-NORC Center for Public Affairs Research shows the public is slightly more likely to say the Senate should convict and remove Trump from office than to say it should not, 45 percent to 40 percent. But a sizable percentage, 14 percent, say they do not know enough to have an opinion.

One question there’s wide agreement on: Trump should allow top aides to appear as witnesses at the trial. About seven in 10 said so, including majorities of Republicans and Democrats, according to the poll. 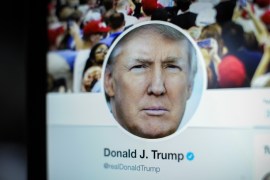 A presidential record: Trump tweets, retweets 125 times in a day

US President Donald Trump sets a presidential record for activity on Twitter as impeachment trial continues. 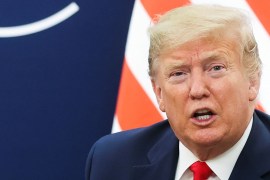 Democrats make their case against Trump as Republican-controlled Senate kicks off up to six days of opening arguments. 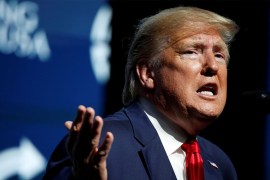 As congressional leaders try to come to a deal on rules for Trump’s trial, these senators’ votes may become crucial.