By
Arwa Ibrahim and
Abdallah al-Salam

The meeting between the two presidents took place on the sidelines of the World Economic Forum in Davos, Switzerland on Wednesday.

It came amid rising regional tensions that spilled over in Iraq after the killing of the leader of Iran‘s Quds Force, General Qassem Soleimani, and the simultaneous assassination of Abu Mahdi al-Muhandis, the deputy leader of the Hashd al-Shaabi (Popular Mobilisation Forces or PMF) in an airstrike ordered by Trump near Baghdad airport earlier this month.

Al-Muhandis was also the founder of Kataib Hezbollah, an Iran-backed armed group that the US targeted in Iraq and Syria on December 30, killing at least 25 fighters and injuring more than 50. The attack was in response to the killing of a US civilian contractor two days earlier.

Supporters and members of Kataib Hezbollah and other paramilitary groups within the PMF, an umbrella organisation of mostly Iran-backed Shia armed groups, responded by storming the US embassy in Baghdad.

Mohammad Mohie, a spokesperson for Kataib Hezbollah, told Al Jazeera that the group considered the Salih-Trump meeting “deeply humiliating and inconsiderate of the loss of Iraqi blood”.

“Trump has committed unforgivable crimes against the Iraqi people. How could Salih join hands with someone who has no respect for Iraq’s sovereignty and the blood of its martyrs?” Mohie asked.

“He [Salih] has positioned himself against the Iraqi people. We call on him to step down and not return to Baghdad. He is no longer welcome among us.”

Echoing those sentiments, Nasser al-Shammari, deputy secretary-general of the al-Naujabaa Brigades, another Shia armed group in Iraq, told Al Jazeera: “The hands of this man [Trump] are covered in Iraqi blood.

“Most Iraqi people consider this [meeting] treacherous. We no longer accept him [Salih] as our representative and won’t rest until he’s held accountable for going against the will of the Iraqi parliament and disregarding our martyrs’ blood.

“He must step down and be banished from Baghdad,” al-Shammari added.

Following the meeting, Naeem al-Aboudi, a member of the Sadiqoon parliamentary bloc, the political arm of the Iran-backed Asaib Ahl al-Haq armed group, wrote on Twitter: “A statesman should not violate his country’s constitution and sovereignty, or be a reason to infuriate millions of his people.”

The PMF, which was legally integrated into Iraq’s state security forces last year, did not issue a formal statement on the meeting. Its media representative, Mohannad Hussein, told Al Jazeera: “We are part of the Iraqi government. It is within diplomatic protocols for heads of state to meet.”

Critics say some of the armed groups within the umbrella organisation operate independently of Baghdad.

Ahead of the meeting, Kataib Hezbollah had warned that Salih would be “violating the will of the people” if he met Trump.

In a statement ahead of the event, the Shia paramilitary group al-Nujabaa said it hoped Salih “rejects meeting this fool”.

In his address in Davos, Salih said: “Iraq is indebted to the US-led coalition for its military and economic support which [it] continues to provide in the fight against ISIL.

“The US-led military coalition was essential in allowing Iraqi forces to defeat ISIL.

“The Iraqi parliament’s vote to expel US troops was not a sign of enmity. It was just a reaction to what many Iraqis saw as a violation to their country’s sovereignty, an issue that will be addressed through dialogue.”

A statement from the Iraqi presidency said that the two heads of state discussed “reducing foreign troops in the country and the importance of respecting the demands of Iraqi people to preserve the country’s sovereignty”.

In a joint news conference with Salih, Trump said the US and Iraq had “a very good relationship” and said the number of US troops in the country was “historically low”.

While Iraq’s populist Shia cleric Muqtada al-Sadr did not issue a statement about the meeting, the move has amplified support for his calls for a “million-man march” against US troops in the country.

The leader of the Asaib Ahl al-Haq, Qais al-Khazali, issued a video statement condemning the meeting and called on Iraqis to join the march scheduled for Friday morning in Baghdad.

The leader of the Iran-backed group warned that the US will have to face the consequences if it “continues to disregard Iraq’s political and public will to expel US troops”.

Reiterating a similar message, Shammari told Al Jazeera: “We expect an unprecedented number of people to take part on Friday. It will reignite the flame of resistance which won’t die until we expel every single one of them [US troops] from Iraq.

“This is the will of the Iraqi people and the parliament,” he added.

Sadr’s calls for the march came just days after the country’s parliament voted to expel foreign troops and cancel its request for assistance from the US-led coalition that had been working with Baghdad to fight ISIL.

Around 5,000 US troops are left in Iraq – most of them soldiers who came to Iraq in an advisory capacity to help the PMF from 2014 to 2017 in their fight against ISIL.

The parliament vote earlier this month provoked Trump to threaten “sanctions like they’ve never seen before” on Iraq. 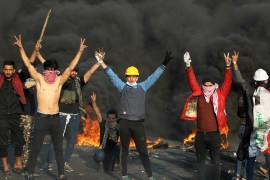 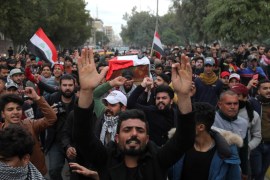 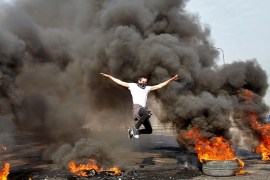