By
Arwa Ibrahim and
Azhar Al-Rubaie

Basra, Iraq – Dozens of journalists in Iraq‘s southern city of Basra have launched a campaign to highlight the dangers they face following the murder of two reporters amid continuing anti-government protests.

Ahmad Abdelsamad, a 39-year-old correspondent for local television station Dijla, and his cameraman Safaa Ghali, 37, were killed near a police station late on Friday in Basra. A group of armed men in a 4×4 vehicle approached their car and opened fire, according to witnesses.

Shihab Ahmed, a Basra-based journalist, told Al Jazeera there was a growing sense of fear among journalists in the city and across Iraq, where at least five journalists have been killed since protests began in October.

“We started a social media campaign to encourage all journalists to boycott security officials and government representatives until a thorough investigation into the killings is complete,” said Ahmed, referring to a campaign called “I Am Next”.

“This [killing of the two reporters] wasn’t a one-off incident. Journalists have been and will continue to be targeted to silence them,” Ahmed told Al Jazeera.

Amid calls to join the campaign, the Iraqi Ministry of Interior invited journalists to a conference in Basra on Sunday to discuss the city’s security situation and the killings.

But journalists refused to attend, forcing the authorities to cancel the event.

“We boycotted the conference because there is no use in attending. They will not share details or information about the incident, so why should we attend,” explained Ahmed.

Like Ahmed, 25-year-old Maher Kareem told Al Jazeera he boycotted the event because the identity of Abdelsamad and Ghali’s killers had not been revealed.

“All of Basra’s journalists refused to attend the conference and we will continue to boycott [the authorities] until we know who killed them [Abdelsamad and Ghali],” Kareem told Al Jazeera.

“I fear for my life. Today it was Safaa and Ahmed. Tomorrow it might be me,” he added.

Following the incident, Khalid Muhanna, spokesman for Iraq’s Ministry of Interior, told Al Jazeera that an investigation into Friday’s killings was under way.

“We condemn the assassination of the two journalists, Safaa and Ahmed, and have ordered an investigation into the incident. We must bring the perpetrators to justice,” said Muhanna.

But journalists across the country said more needed to be done.

“The targeting of journalists has had a deep impact on press freedoms and freedom of expression in Iraq,” said Ibrahim Al-Sarraj, head of Iraqi Journalists Rights Defense Association (IJRDA), based in capital Baghdad.

“A transparent investigation into these crimes is only a first step towards preventing further violence against us,” he said.

I fear for my life. Today it was Safaa and Ahmed. Tomorrow it might be me.

In a show of solidarity with Abdelsamad and Ghali, a group of journalists in Baghdad on Saturday held a vigil near the Iraqi Journalists Syndicate building to mourn the death of the two reporters.

“We are here in solidarity with our colleagues Safaa and Ahmed and to express our sincere condolences and rejection of what has happened to them,” said Laith Natiq.

“We condemn the violation of press freedoms in Iraq and the way [armed groups] are trying to keep us silent,” he said,

Natiq said although it was unclear who was behind the killings, he suspected they were groups who want to keep the journalists silent.

In its 2019 annual report, Iraq’s National Association of Journalists documented 118 cases of assault against journalists, including electrocution, battery, suffocation and the use of tear gas.

The report said journalists were facing “unprecedented repression” as a result of their coverage of mass anti-government demonstrations which began in early October.

Another report by Reporters Without Borders in December said three journalists have been killed in Iraq since the protests erupted.

After protests spread across Baghdad and in Iraq’s mainly Shia south, activists reported a growing number of assassinations, kidnappings and threats, which they believe was aimed to intimidate them and prevent them from attending the demonstrations.

More than 470 people have been killed in the past three months, including about a dozen activists.

Following the killings, hundreds of mourners marched through Basra on Saturday, carrying symbolic coffins and calling on the authorities to investigate the incident.

Many of them told Al Jazeera they believed that Abdelsamad and Ghali, who had spent long hours reporting on the protest movement in Basra, were killed because they had called out armed groups attacking the demonstrators.

“Ahmed and Safaa were among the few with no agenda when reporting on the demonstrations,” a protester at the funeral processions told Al Jazeera. “The armed groups that wanted to silence them are behind this.”

Ahmed Riyadh, a close friend of Abdelsamad and Ghali, agreed that the reporters were killed because of their work.

“I was shocked once I received the news of their assassination. I think the video Ahmed posted a few days before he was killed was behind his death,” he added, referring to a video in which Abdelsamad criticised the role of armed groups in Basra.

In another widely-circulated video which Abdelsamad posted minutes before his death, the reporter implied that Iran-backed armed groups in Basra were behind the campaign of arbitrary arrests against activists and protesters.

“How come there were no arrests when they protested against America?” Abdelsamad asked in the video, referring to crowds of mostly Iran-backed Hashd al-Shaabi (Popular Mobilisation Forces or PMF) supporters and members who stormed the US embassy in Baghdad last month.

According to a statement by the Journalistic Freedoms Observatory, Abdessamad had sent in a video testimony about “threats he received from militias because of his criticism of Iran in his coverage” two weeks before his death. 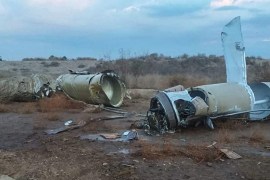 Rockets hit Iraq military base near Baghdad amid US-Iran tensions 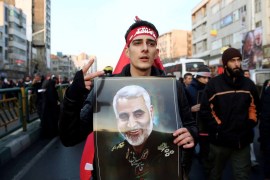 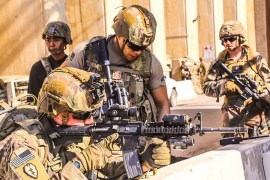 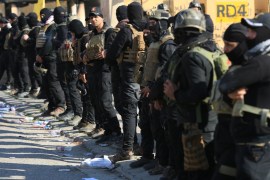 Protesters and observers say uncertainty awaits Iraq as Iran vows to retaliate against US air strike.