The United States said on Tuesday it was sending additional troops to the Middle East, after hundreds protesters stormed its embassy compound in Iraq, setting fires and chanting: “Death to America!”

Angered by US air raids that killed two dozen militia fighters on Sunday, supporters of the powerful Hashd al-Shaabi (Popular Mobilisation Forces) paramilitary group spilled through checkpoints in the high-security Green Zone on Tuesday, demanding the removal of American troops from Iraq.

Reacting to the attack, US President Donald Trump said he held Tehran “fully responsible” for the incident, and said the protesters “will be held fully responsible”, he wrote on Twitter on Tuesday.

“In addition, we expect Iraq to use its forces to protect the Embassy, and so notified!”

Trump later warned in a separate statement that Tehran would “pay a very big price” after the attack, but when asked later in the day about the possibility of tensions spiralling into a war with Iran, Trump told reporters: “Do I want to? No. I want to have peace. I like peace. And Iran should want to have peace more than anybody. So I don’t see that happening.”

US Secretary of State Mike Pompeo said the attack was “orchestrated by terrorists”, one of whom he named as Abu Mahdi al-Muhandis.

Al-Muhandis has been identified as the second-in-command of the Tehran-backed Hashd al-Shaabi group which includes Kataib Hezbollah, the group that was hit in the US air raids.

Defense Secretary Mark Esper said in a statement that about 750 troops from a rapid response unit of the 82nd Airborne Division are prepared to deploy over the next several days to the region.

“This deployment is an appropriate and precautionary action taken in response to increased threat levels against US personnel and facilities, such as we witnessed in Baghdad today,” he said.

A social media post from the US Marines said the troops from its crisis response command in Kuwait were deployed to Iraq.

Send the Marines@SPMAGTF_CR_CC deploys from Kuwait to Iraq to bolster security at the US Embassy and ensure the safety of American citizens there, Dec. 31. @StateDept pic.twitter.com/NQg4ZAYiGi

The deployment of 750 soldiers is in addition to 14,000 US troops who have been deployed to the Gulf region since May in response to concerns about Iran, and the reported attacks on commercial shipping in the Gulf.

At the time of the attack, the US had about 5,200 troops in Iraq, mainly to train Iraqi forces and help them combat the ISIL (ISIS) group.

Meanwhile, a US official, who provided unreleased details to the Associated Press news agency on condition of anonymity, said the full brigade of about 4,000 soldiers may deploy.

On Sunday, the US launched air attacks on sites in Iraq and Syria belonging to Kataib Hezbollah, an Iran-backed militia, that Washington said was in retaliation for the killing of a US contractor.

At least 25 Kataib Hezbollah fighters were killed in the attack.

Kataib Hezbollah, through its spokesman Mohammed Muhi, denied carrying out the attack on the US facility.

That triggered the protest and storming of the US embassy compound on Tuesday.

The protesters raised flags of the powerful Hashd al-Shaabi, with which Kataib Hezbollah is associated.

The developments represent a significant downturn in Iraq-US relations that could further undermine US influence in the region and weaken Washington’s hand in its pressure campaign against Iran.

Iraq has long struggled to balance its ties with the US and Iran, allies of the Iraqi government.

But the government’s angry reaction to the US air attacks signalled a deterioration of US-Iraq relations.

To those many millions of people in Iraq who want freedom and who don’t want to be dominated and controlled by Iran, this is your time!

Iraqi security forces made no effort to stop the protesters as they marched to the heavily-fortified Green Zone after a funeral held for those killed in the US air attacks, letting them pass through a security checkpoint leading to the area.

Seven armoured vehicles with about 30 Iraqi soldiers arrived near the embassy hours after the violence erupted, deploying near the embassy walls but not close to the breached area. Four vehicles carrying riot police approached the embassy later but were forced back by the protesters who blocked their path.

Following the attack, US Secretary of State Mike Pompeo warned Iraqi Prime Minister Adel Abdul Mahdi and President Barham Salih that the US “will protect and defend its people, who are there to support a sovereign and independent Iraq”, the State Department said in a statement.

Abdul Mahdi and Salih assured Pompeo that “they took seriously their responsibility for and would guarantee the safety and security of US personnel and property”, the statement said. 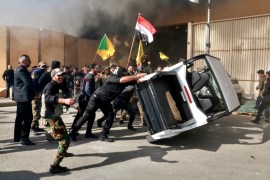 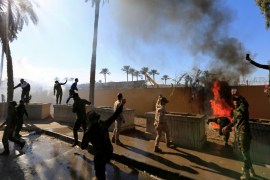 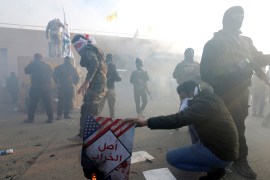