By William Roberts and Steve Chaggaris

Lines of voters stretched from polling places in Virginia and Minnesota as early voting started in four states, the first of the 2020 presidential election.

The longest lines were found in Virginia, where voters previously needed a reason to cast an early ballot. In the state’s Fairfax County, where reports showed lines stretching for hours, election workers scrambled to open an additional voting room at the county government centre.

Ed O’Keefe of CBS News tweeted that “dozens” of socially-distanced voters cast ballots in the first 45 minutes of early voting in Duluth, Minnesota.

South Dakota and Wyoming also saw their first day of early voting on Friday. Ballots can be cast through November 3.

Former US president Barack Obama is encouraging people to volunteer as poll workers during early voting and Election Day on November 3.

In a tweet, he said volunteering “can help your community and make sure this election runs fairly and safely”.

If you're looking for a way to get involved in this upcoming election, sign up to volunteer as a poll worker for early voting and Election Day. You can help your community and make sure this election runs fairly and safely. Sign up: https://t.co/Ge4XvvPwpW pic.twitter.com/wb4Ap7xmtt

The ad, which features former National Football League (NFL) player Jack Brewer, touts what Trump says is his strong record of uplifting Black communities – and targets his Democratic rival Joe Biden as someone who has made “empty promises”.

The urban ad is part of a multi-state buy in the US states of Minnesota, Wisconsin, Michigan, North Carolina, Georgia, Florida, and Pennsylvania.

A recent poll shows Biden by far outperforming Trump among Black voters ahead of November 3, with 78 percent support. Whether Black Americans will be energised to come out in large numbers to vote remains uncertain, however, and could potentially define the outcome of the 2020 election.

Trump adviser and son-in-law Jared Kushner is getting ripped on social media for remarks he reportedly made in March to Silicon Valley entrepreneurs, business executives and venture capitalists who were offering to help secure PPE for essential workers.

“The federal government is not going to lead this response… It’s up to the states to figure out what they want to do,” Kushner said, according to a new report in Vanity Fair magazine.

Just as New York City was getting hit with the worst coronavirus outbreak in the nation, Kushner dismissed concerns about nurses using garbage bags for protection.

“Cuomo didn’t pound the phones hard enough to get PPE for his state… His people are going to suffer and that’s their problem,” Kushner reportedly said.

This Vanity Fair story is another inaccurate and disgusting partisan hit job. President Trump has consistently put the health of all Americans first.

17:30 ET – Trump ‘did not like’ FBI director’s testimony to Congress about Russian election interference

President Trump said FBI Director Chris Wray should have focused more on China in his testimony to Congress on Thursday.

Asked by reporters at the White House whether he is considering replacing Wray, Trump said: “We’re looking at a lot of different things. And I did not like his answers yesterday and I’m not sure he liked them either. I’m sure he probably would agree with me.”

Under questioning by House Democrats, Wray had acknowledged on Thursday that Russia is waging a disinformation campaign aimed at denigrating Trump’s political opponent Joe Biden. Trump has sought to push the idea that China and Iran prefer Biden over him.

Democratic presidential candidate Joe Biden criticised President Trump for going along with Republican tax cuts for the rich and policies that helped Wall Street while ignoring the plight of American workers despite his promises.

“The only real power for workers in America is union power. You are the folks who keep the barbarians on the other side of the gate, making sure that people can make a decent living,” Biden said in a campaign speech at a carpenters union hall in Duluth, Minnesota.

“And folks, here like everywhere else, times are hard. Unemployment is way up due to the pandemic,” Biden said, outlining proposals to create jobs through infrastructure spending and clean energy investments.

The unemployment rate in Minnesota was 7.4 percent in August, down from a pandemic high of 9.9 percent in May, according to the US Bureau of Labor Statistics. It had been 2.9 percent in March before the virus outbreak.

Early voters in Minnesota said they were anxious to get a jump on the process and avoid potential crowds on Election Day.

“I just wanted to come get it done,” said Jason Miller, 33, a painter who was in line in Minneapolis to cast a vote for Biden. He said he could not wait to cast a vote against Trump, the Reuters news agency reported.

Steve O’Rourke, 65, who came with a son who has to leave the country on a work trip, said he decided to vote early in person rather than by mail partly out of concern whether a mail-in vote would be counted.

15:45 ET – Trump says “in many cases” he knows better than his experts

“Yeah, I think in many cases I do,” President Trump said at a White House news conference when asked by a reporter why he so often does not trust his administration’s experts or thinks he knows better than they do.

Trump this week has publicly contradicted Robert Redfield, the Director of the Centers for Disease Control and Prevention, on the timing of the availability of a COVID-19 vaccine.

Trump said Wednesday that Redfield “had made a mistake” in stating that a coronavirus vaccine would not be available until next year. Trump is insisting one will be available in October, before the election.

The president also clashed with FBI Director Chris Wray who testified to Congress on Thursday that Russia is waging a disinformation campaign to help Trump get re-elected by denigrating Joe Biden.

“We’re awarding $13 bn to permanently repair, replace thousands of miles of transmission and distribution lines that should have been done many years ago,” said Trump who sought to blame his Democratic rival Joe Biden for the decline in Puerto Rico’s economy.

“I am the best thing that has ever happened to Puerto Rico. Biden was a disaster. It’s not even close,” he said.

Biden has criticised Trump in Florida, a battleground state in the presidential election, for failing to help Puerto Rico rebuild after the devastation of Hurricane Maria in 2017. An estimated 40,000 Puerto Ricans settled in Florida after the storm adding to the state’s population of 1.1 million Puerto Ricans.

It’s a staggering sum, unheard of for a Democrat competing in this conservative state, and matches what the Republican incumbent, Senator Lindsey Graham, has raised in his pursuit of a fourth term. It dwarfs the $10 million figure Harrison previously told The Associated Press he thought necessary to win.

The influx of cash for Harrison — a Democratic National Committee associate chair and former state party chair – followed a Quinnipiac University poll that showed him tied with Graham.

The money is providing a rare opportunity to blanket the airwaves in a place where Democrats have not won a statewide contest in 15 years, bolstering the party in its fight to win back a US Senate majority.

Kamala Harris is getting her own comic book, chronicling her path from childhood to her historic nomination as US vice president.

“Female Force: Kamala Harris,” part of Tidalwave Productions’ Political Power series, is set for release on October 21, a day after she turns 56, less than two weeks before the November 3 election, the Reuters news service reported.

The publisher on its website describes Harris as “full of grit and determination,” and says that her “no-nonsense approach and bi-racial heritage have made her a popular member of the Democratic party.”

13:45 ET – House Democrats demand emergency probe into whether AG Barr is trying to influence the election

Democrat committee chairs in the House of Representatives have asked the Department of Justice Inspector General to open an emergency investigation into whether Attorney General Bill Barr is improperly pushing political prosecutions to help President Trump get re-elected.

“Attorney General Barr has signaled repeatedly that he is likely to allow DOJ to take prosecutorial actions, make public disclosures, and even issue reports before the presidential election in November,” the letter said.

A majority of President Donald Trump’s supporters plan to cast their ballot on Election Day, while about half of Joe Biden’s backers plan to vote by mail, a sign of a growing partisan divide over how best to conduct elections in the United States.

Fifty-four percent of voters say they will vote before polls open on Election Day. In 2016, roughly 42 percent of voters did so, according to a new poll from The Associated Press-NORC Center for Public Affairs Research.

Overall, 39 percent of registered voters say they will vote by mail this election, well above the 21 percent who  normally do so.

The rise is skewed toward backers of the former vice president, 53 percent of whom plan to vote by mail. Fifty-seven percent of Trump’s supporters say they’ll vote in person on November 3.

The group already spent $30 mn on ads in the past two weeks against Biden in Florida, North Carolina, Pennsylvania, Wisconsin, Arizona, Iowa and Georgia. Preserve America is headed by Republican strategist Chris LaCivita who was behind the damaging ‘Swift Boat’ attack ads that helped defeat 2004 Democratic presidential nominee John Kerry.

Virginia Senator Tim Kaine, who was the Democratic vice presidential nominee in 2016, tweeted a picture of himself voting in person.

I just voted early for @JoeBiden, @KamalaHarris, and Democrats all the way down the ticket here in Virginia—what a great day! I hope you'll join me—it's easy, convenient, and boy does it feel good to vote for competence, character, and compassion: https://t.co/B21QKpeiSj pic.twitter.com/tTS4ysyDUj

Minnesota has not voted for a Republican president since Richard Nixon in 1972, yet Trump surprisingly came within 1.5 percent of beating Hillary Clinton there in 2016.

Trump and his campaign believe they have a chance to flip that reliably Democratic state this year and he is travelling to Bemidji in the less-Democratic northern part of the state for a campaign rally today. For his part, Biden will also head to northern Minnesota today for a campaign event in Duluth.

Al Jazeera Online’s William Roberts has more on why Minnesota might be fertile ground for Trump.

“They said it couldn’t be done. But President Trump did it,” the advertisement says before mentioning his Nobel Peace Prize nomination (he is one of 318 total nominations in 2020).

Trump’s opponents have been making a big deal about a report that the president allegedly referred to those who died in war as “losers” and “suckers”. Now, Joe Biden’s campaign is running an advertisement about those comments.

The TV advertisement features an Air Force veteran who notified families when loved ones died during military service. “These military families suffer,” he says. “And those spouses are not suckers. And those children are not losers.”

Trump has vociferously denied the specific allegations in the report, however, he has made widely-covered public comments in recent years denigrating veterans.

Hello and welcome to Al Jazeera’s continuing coverage of the US elections. William Roberts and Steve Chaggaris will update you throughout the day.

Read all the updates from yesterday (September 17), including coverage of Biden’s Pennsylvania town hall and Trump’s late Wisconsin rally, here. 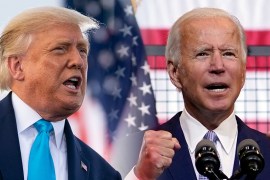 Trump aims for an upset over Biden in Minnesota

The president and Democratic challenger will both campaign on the same day in the state where George Floyd was killed. 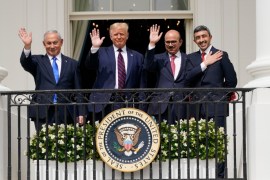 Analysis: Why Trump’s best news of the week may not pay off

The UAE-Bahrain-Israel normalisation deals are unlikely to boost Trump’s campaign, and he’s partly to blame. 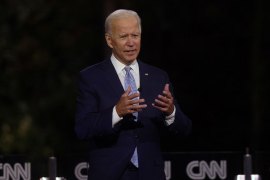