Here were the events of the day:

19:27 ET – Trump: President Kamala Harris ‘would be an insult to our country’

President Donald Trump took his campaign roadshow to Winston-Salem, NC, where he not only spent a good portion of his remarks attacking his Democratic opponent Joe Biden, but he also ramped up his criticism of Biden’s vice-presidential running mate, Kamala Harris.

“If our foreign adversaries were devising a scheme to cripple America, they could hardly do better than the Biden-Kamala Harris,” Trump told the crowd gathered at a Smith Reynolds Airport hangar. “You know what? People don’t like her. Nobody likes her. She could never be the first woman president, she could never be. It would be an insult to our country.”

During that line of attack, Trump did at least pronounce Harris’s first name correctly: Kamala, like Comma-la.

The next time her name came up, he repeatedly referred to her as Ka-MA-la, a pronunciation some of her supporters charge is racist and deliberately mispronounced by her opponents.

Michael Cohen, the former fixer for Trump, in his new book has tied together for the first time the 2016 presidential endorsement of Trump by American evangelical leader Jerry Falwell Jr to Cohen’s own role in helping to keep racy “personal” photographs of the Falwells from becoming public.

As Reuters reported last year, the Falwells enlisted Cohen to keep “a bunch of photographs, personal photographs” from becoming public, Cohen said in a recording, made surreptitiously by comedian Tom Arnold. “I actually have one of the photos,” he said, without going into specifics. “It’s terrible.”

He later writes, “In good time, I would call in this favor, not for me, but for the Boss, at a crucial moment on his journey to the presidency.”

In the book, Cohen did not explicitly say that the endorsement was the favour he sought in return for his help in having kept the Falwell photos from getting out. But his account marks the first time he has linked the two issues.

The head of the House oversight panel has launched an investigation and urged the immediate suspension of Postmaster General Louis DeJoy following reports that he illegally reimbursed former employees for political contributions.

House Committee on Oversight and Reform Chairwoman Carolyn Maloney, in a statement, said if the allegations are true, DeJoy faced “criminal exposure” for both violating the campaign finance law and for lying to Congress in a denial during a recent hearing.

“We will be investigating this issue, but I believe the board of governors must take emergency action to immediately suspend Mr DeJoy, who they never should have selected in the first place,” Maloney said.

I am launching an @OversightDems probe into claims that PMG DeJoy violated election contribution laws. If true, Mr. DeJoy could face criminal exposure—not only for his actions in North Carolina, but also for lying to our Committee under oath. https://t.co/mRvv3GqYWy

Trump, in an address at the Jupiter Inlet Lighthouse and Museum in Florida, lambasted Biden’s agenda, while calling himself the “great environmentalist”.

At the taxpayer-funded event, Trump announced he was extending and expanding a ban on new offshore drilling sites off the coasts of Florida, Georgia and South Carolina. The existing moratorium covers the Gulf of Mexico, and Trump said the new one would also cover the Atlantic coast – a significant political concern in coastal states like Florida.

“My administration’s proving every day that we can improve our environment while creating millions of high-paying jobs,” added Trump, whose administration has overturned or weakened numerous regulations meant to protect air and water quality and lands essential for imperiled species, while withdrawing from the Paris Agreement, a 2015 international climate accord.

Kanye West will appear as a presidential candidate on Mississippi’s ballot in November, after being approved as a qualified candidate by the Mississippi State Board of Election Commissioners on Tuesday.

The rapper has already qualified to appear on the ballot as an independent candidate in several states, including Arkansas, Idaho, Iowa, Tennessee, Oklahoma and Utah.

To qualify in Mississippi, he was required to pay a $2,500 fee to the Mississippi Secretary of State’s Office and get the signatures of at least 1,000 Mississippi voters.

Trump and Biden have released new battleground ads as the November 3 election approaches.

An ad released by Trump, which will run in North Carolina, Georgia, Florida, Minnesota, Wisconsin, and Michigan, promises the “Great American Comeback” and portrays Biden as willing to shut down the economy again. The former vice president has said he would support another shutdown if the pandemic warranted it.

Trump is set to highlight conservation and restoration projects in Florida, where he is travelling in his official capacity, despite his administration overturning or weakening numerous regulations meant to protect air and water quality and lands essential for imperilled species.

Trump is set to speak beside the Jupiter Inlet Lighthouse and Museum before holding a campaign rally in Winston-Salem, North Carolina, another must-win state for his re-election.

12:30 ET – Trump confirms he is considering spending own money on campaign

Trump has confirmed he is considering spending his own money on the campaign, after a report in Bloomberg News said he was weighing giving up to $100m to his war chest.

When asked about spending his own money on Tuesday, Trump said: “If I have to, I will.”

“Whatever it takes, we have to win,” he added.

Trump’s campaign is reportedly running low on funds after going big on early advertising and fundraising spending, according to a New York Times report.

12:00 ET – New Hampshire and Rhode Island head to the polls

Primaries in New Hampshire and Rhode Island will decide who will run for Senate and House seats in the November 3 election.

In Rhode Island, Senator Jack Reed, a Democrat, is running unopposed in the primary. He will face Republican challenger Allen Waters, who is also running unopposed, in the general election.

11:30 ET – Obama shares ‘tips’ with Harris on working with Biden

Former US President Barack Obama, in a tweet, has said he wanted to “share a few tips” with vice presidential candidate Kamala Harris about serving with Biden.

The tweet included a video of Obama, the country’s first Black president, speaking with Harris, the first Black vice-presidential candidate in US history.

Great to catch up with our next Vice President, @KamalaHarris. I wanted to make sure to share a few tips about serving alongside our friend @JoeBiden. pic.twitter.com/ncidvmylch

The US Army’s head has said that military leaders would only recommend sending troops to combat when it was in the national security interest or as a last resort, but declined to comment on Trump suggesting that leaders wanted to fight wars to keep weapon makers happy.

“I can assure the American people that the senior leaders would only recommend sending our troops to combat when it is required in national security and in the last resort. We take this very, very seriously in how we make our recommendations,” he added.

Trump on Tuesday said Pentagon officials probably weren’t “in love with me” because “they want to do nothing but fight wars so that all of those wonderful companies that make the bombs and make the planes and make everything else stay happy.”

The Biden campaign has taken over the Instagram account of a 15-year-old California supporter who amassed 85,000 followers during the summer break, according to The Verge news site.

Campaign officials told The Verge that the account will be used to foster user-generated content from Biden supporters.

Kamala Harris is: ✅ Smart ✅ Tough ✅ Ready to lead ✅ The future Vice President of the United States of America This is a movement and we are building a team that works for all Americans. This is our time to take our country back from Trump. Join @votejoe, @joebiden, and @kamalaharris in the battle for the soul of our nation.

Zeke Emanuel made the comment to the Atlantic magazine in a story published on Tuesday. Experts expect a surge in mail voting in November amid concerns about spreading the virus at polling stations.

“There’s a legitimate concern, but I do think we can make it much safer by following the precautions,” he said. “You don’t want people to be disenfranchised by the pandemic, and you should encourage people that it’s safe. It’s like shopping.”

Democratic candidate Joe Biden, when asked in an interview on Monday if he condemns Antifa, responded: “Yes, I do … violence no matter who it is”.

The comment came during an interview with the local NBC affiliate WGAL, amid questioning about violence at racial justice protests that have swept the country since the police-killing of George Floyd in May.

“I condemn it across the board,” Biden said of violence at the demonstrations. “The president still hasn’t condemned the far-right folks coming out and protesting and using violence.”

On the heels of a report that the Trump’s campaign is facing a money crunch after taking a free-spending, and apparently ineffective, approach, a new report said the president is considering adding $100m of his own money to his war chest.

Trump has discussed putting up the cash with multiple people, sources familiar with the matter told Bloomberg news, although he has not yet made a final decision. Trump spent $66m on his 2016 campaign.

Hello and welcome to Al Jazeera’s continuing coverage of the US elections. This is Joseph Stepansky.

Read all the updates from yesterday (September 7) here. 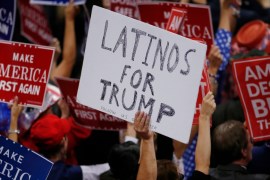 The polls show Trump slightly leading in Latino support, a divorce from 2016 when Clinton carried the demographic. 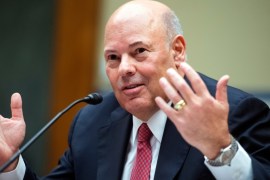 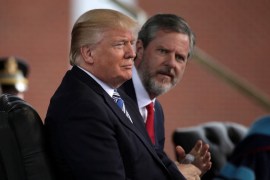 Michael Cohen claims in his newly released book that a pivotal 2016 nod from Falwell was linked to a prevented scandal. 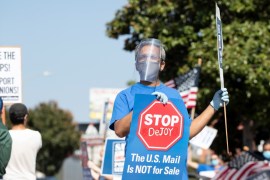 Why is Trump worried about mail-in voting? | Start Here

The president says postal voting will result in election fraud. Is he right? And how does the process actually work?