A smaller group of demonstrators marched towards Parliament after hundreds of others gathered in Martyrs’ Square on Tuesday to demand justice for victims of the devastating port blast and commemorate the centennial anniversary of the creation of Greater Lebanon.

The protests coincided with the visit of French President Emmanuel Macron to Beirut for the second time since the enormous explosion at the capital’s port last month, which killed at least 190 people, injured thousands, and left 300,000 others homeless.

The two-day visit came after Lebanese leaders named the country’s former ambassador to Berlin, Mustapha Adib, as the new prime minister-designate, tasking him with the formation of a new government in the wake of the blast.

Protesters, coming from various parts of the country and representing many civil society groups and political movements, chanted anti-government slogans and demanded the government step down.

“We want them gone, all of them gone,” said a young protester as he threw rocks at steel walls.

Firing tear gas and rubber-coated bullets, security forces pushed back the protesters away from Parliament into Martyrs’ Square. Sporadic clashes erupted between both sides. By late evening, however, only a few dozen demonstrators remained on the streets.

Earlier at Martyrs’ Square, protesters called for early elections, a new electoral law, and an independent government to resolve the prolonged financial crisis and hold those responsible for the August 4 port explosion accountable.

Many also expressed their rejection for Adib as the country’s new prime minister and Macron’s visit, saying it was a reflection of foreign involvement in the country’s internal affairs.

Nay Elrahi, a 33-year-old university instructor from Mount Lebanon, said she wanted to express her rejection for the ruling elite, including the newly appointed prime minister.

“We are here to say no to the ruling class and to the farcical appointment of Adib. The political parties don’t seem to realise how devastating the blast was,” the activist and protest organiser told Al Jazeera.

“They’re proceeding with the same business-as-usual mode, appointing people in an unconstitutional way,” said Elrahi. “This blatant lack of accountability with appointments by political parties for public offices is what got us where we are.

“Adib has no vision, no plan. He just parachuted into office with the help of an international chaperon.”

Echoing similar sentiments, Rami Finge, a 54-year-old dentist from Tripoli – Adib’s hometown – said while he and a group of 25 other activists came from the northern city to reject Macron’s visit, Adib’s appointment was even more reason for him to participate.

“Especially we, the residents of Tripoli, have suffered from this regime. Adib represents the same ruling class which we reject completely,” said Finge, adding he went to school with the newly appointed prime minister.

“He’s not an independent politician, nor is he cut out for this job,” he added.

Adib was tasked on Monday with forming a new government after he received 90 of 120 votes in favour of his appointment from across the main political parties in power – including Hezbollah, the Free Patriotic Movement, the Amal and the Future Movements.

Adib’s appointment came after his predecessor, Hassan Diab, who came to power by the support of a narrower margin of the country’s ruling elite following anti-government protests that toppled Saad Hariri’s government last year.

Doumit Azzi, a 22-year-old university student from Jounieh, north of Beirut, said a principle reason behind his participation was “to show opposition to Macron’s involvement”.

“All it [the visit] does is give international legitimacy to the current regime,” said Azzi, who is also a member of the grassroots Lahaki – For My Rights – movement.

“We are angry at this regime, which has done nothing after the blast. And before that, it did nothing to address the demands of the revolution or solve the economic crisis – now even worse,” he told Al Jazeera.

On Monday, the World Bank estimated the explosion caused at least $3.2bn in physical damage, mostly to the transport sector, housing, and cultural sites, in addition to at least $2.9bn in losses to the country’s economic output.

Even before the blast, Lebanon’s economy was in tatters because of the breakdown of the banking system, skyrocketing inflation, and the COVID-19 pandemic, leading to the World Bank projecting that 45 percent of the population would be living under the poverty line this year.

Neamat Baderaldeen, 39, from Nabatiyeh in south Lebanon, said she came to show her rejection for “foreign interference” in Lebanon’s affairs.

“I’m against Macron’s visit and any other foreign involvement in our country,” said Baderaldeen. “Whether its tasking Adib or Macron’s visit and his meeting with civil society groups and NGOs, the developments mean there’s been no change.

“We all know that Macron isn’t here to help us. He’s here for foreign interests.”

Tuesday’s protest was the first large demonstration since August 8, which left dozens of people injured after thousands of anti-government protesters were met with tear gas, rubber-coated bullets, and sporadic live ammunition fire from security forces, only four days after the blast.

Clashes erupted between rioters and members of the Internal Security Forces (ISF) as demonstrators tried to reach the country’s Parliament building, a site that has often been targeted since the launch of the protest movement in October last year.

Thousands of people have since taken to the streets in mass demonstrations to protest corruption, the lack of basic services, and government mismanagement.

The protest movement experienced a lull as coronavirus-related restrictions were imposed to curb its spread in February. But the centennial and recent developments pushed people back onto the streets.

“We’re here because today marks 100 years since Lebanon was established, but we still have no country,” said 30-year-old Mohamed Sarhan. “We’re here to demand a change.” 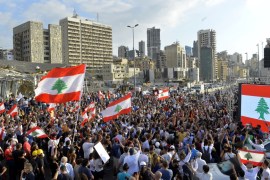 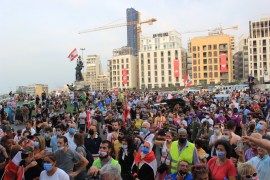 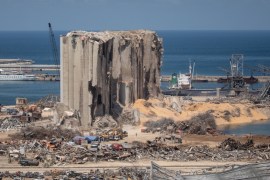 More than half of Lebanon could face food shortages: UN

Lebanon was already in economic collapse even before the August 4 blast at that killed 188 people.