Belarusian opposition politician Svetlana Tikhanovskaya said on Monday she was ready to lead Belarus and called for the creation of a legal framework to ensure a new fair election could be held.

An estimated 100,000 opposition protesters rallied in Belarus’s capital on Sunday – the biggest demonstrations yet against the disputed re-election of President Alexander Lukashenko, even as the leader rejected calls to step down and hold new polls.

Speaking in a video address from Lithuania, Tikhanovskaya urged security and law enforcement officers to switch sides from Lukashenko’s government, saying their past behaviour would be forgiven if they did so now.

“I did not want to be a politician. But fate decreed that I’d find myself on the frontline of a confrontation against arbitrary rule and injustice,” Tikhanovskaya said in the video from exile.

“I am ready to take responsibility and act as a national leader during this period.”

Belarusians chanting “Step down!” filled the centre of Minsk in the biggest protest so far against what they said was the fraudulent re-election a week ago of the longtime president.

In a defiant speech at a smaller rally of his own supporters in Minsk’s Independence Square, Lukashenko said Belarus would “die as a state if it agreed to hold new elections under pressure” and accused NATO of massing on his country’s western border.

“I called you here not to defend me … but for the first time in a quarter-century, to defend your country and its independence,” said the 65-year-old leader.

Belarus has been rocked by a week of street protests after protesters accused Lukashenko of rigging a presidential election last Sunday in which he claimed to have secured 80 percent of the votes.

Lukashenko, who has ruled Belarus for the last 26 years and is facing the greatest challenge to his leadership, denies the allegation. 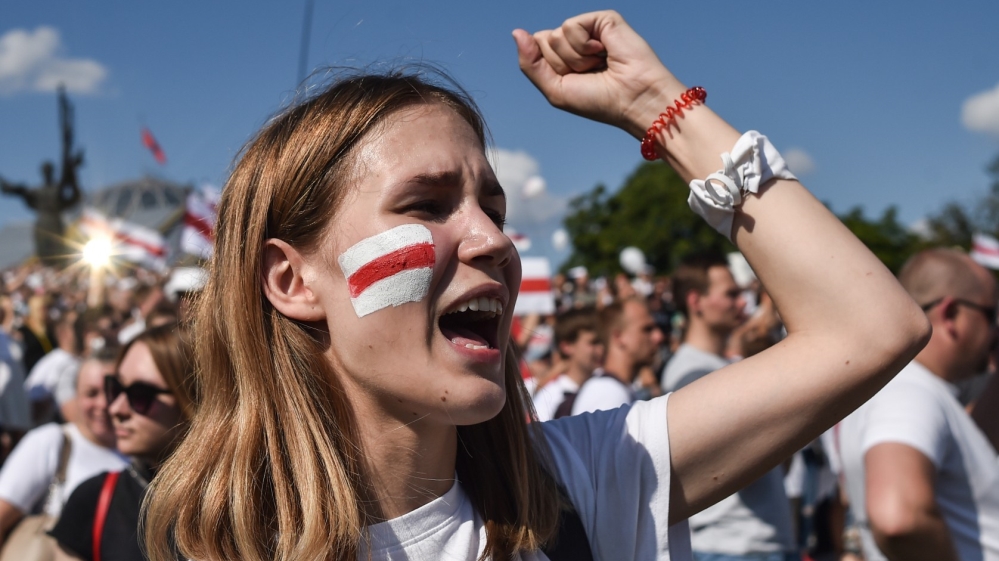 “I am not a fan of rallies but alas, it’s not my fault I had to call you to help me,” he said as some 5,000 supporters waved national flags and shouted: “Thank you!” and “Belarus!”

Wiping his brow, the president, standing at a podium in a short-sleeved shirt, insisted on the legitimacy of his election victory over the popular opposition candidate, Tikhanovskaya.

“The elections were valid. There could not be more than 80 percent of votes falsified. We will not hand over the country,” he said.

He warned of a threat from neighbouring NATO countries as well as from the opposition movement calling for new elections, as the crowd shouted “No!”

Lukashenko’s rally coincided with the opposition movement calling for nationwide “March of Freedom” protests, which saw tens of thousands gathering in Minsk.

Al Jazeera’s Step Vaessen, reporting from the capital, said Lukashenko’s rally was “hastily organised” and “dwarfed” in comparison to the opposition protest.

“[There is a] euphoric mood here in Minsk, unprecedented scenes,” she said. “People here are coming up to us saying, ‘we are changing the country, you are witnessing history’.”

Chanting “Leave!”, the opposition supporters marched down Independence Avenue, some carrying a red and white flag, once the state flag and now used to represent opposition to Lukashenko’s government.

Demonstrators raised victory signs and held flowers and balloons, with many wearing white, the colour that has come to symbolise the opposition movement. Those marching included a group of veteran paratroopers in uniform berets.

“It’s unbelievable what I am seeing here right now, there are up to 100,000 people here. Huge crowds,” said Vaessen. “This is something Lukashenko was not expecting.”

Demonstrators held placards with slogans such as “We are against violence” and “Lukashenko must answer for the torture and dead”.

A violent police crackdown on protesters saw more than 6,700 people arrested, hundreds wounded and two people dead. Many protesters alleged they were tortured in custody.

The brutal suppression of post-election protests in Belarus has drawn harsh criticism by Western countries and the United Nations.

European Union foreign ministers said on Friday they rejected the election results in Belarus and began drawing up a list of officials in Belarus who could face sanctions for their role in the crackdown.

On Sunday, Lukashenko spoke to Russian President Vladimir Putin, who told the Belarusian leader that Moscow was ready to provide help in accordance with a collective military pact if necessary, according to a statement issued by the Kremlin.

Lukashenko’s challenger Tikhanovskaya, who fled to neighbouring Lithuania on Tuesday, called for the weekend protests and an election recount. Her campaign announced she was starting to form a national council to facilitate a transfer of power.

Victor Olevich, lead expert at the Center for Actual Politics, a Moscow-based think-tank, told Al Jazeera “Lukashenko has lost what remnants of legitimacy he still had after the massively falsified elections that gave him 80 percent of support”.

“Otherwise that would be against Moscow’s long-term interest in Belarus because the Belarusian people will then believe that Moscow is not acting in their best interest.” 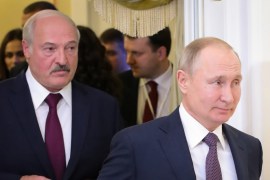 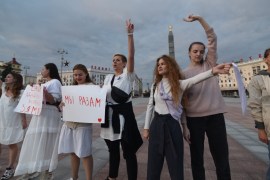 Will Belarus’s Lukashenko survive protests against his rule? 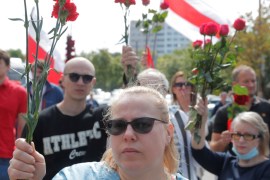 Belarus braces for fresh protests as pressure grows on Lukashenko