Police in Hong Kong have ordered the arrest of several pro-democracy activists living in exile on suspicion of violating a China-imposed national security law, according to Chinese state media.

CCTV said late on Friday the six are wanted on suspicion of secession or colluding with foreign forces, crimes the new law punishes with up to life in prison.

It named them as Nathan Law, Wayne Chan Ka-kui, Honcques Laus, Simon Cheng and Ray Wong Toi-yeung. Samuel Chu, an American citizen living in the United States, was also on the list.

The arrest warrants mark the first time the city’s police have used the extraterritorial power in the new law to go after activists who are not in the semi-autonomous Chinese territory.

Chu, speaking to Al Jazeera from the US city of Los Angeles, described the warrant for his arrest as “outrageous” and said it showed “how desperate and how scared” China is of international pressure.

“It’s such an outlandish claim that they somehow have jurisdiction over an American citizen lobbying the American government,” said Chu, who runs the Hong Kong Democracy Council, a Washington, DC-based advocacy group.

“The kind of global bullying and censorship, not only of citizens of other countries, but businesses … it’s starting to create a united front line, globally, pushing back,” Chu said, adding: “Today’s move, particularly, shows they are scared of losing control. They know that if Hong Kong can continue to be a place of resistance, it threatens their control all over the mainland.”

Nathan Law, a former Hong Kong legislator who is currently in the United Kingdom, called the charges “trumped-up” and said his only crime was that he “loves Hong Kong too much”.

He said on Facebook the “wanted bulletins”, recent arrests, and mass disqualifications of pro-democracy activists from a now-delayed legislative council election are “indications of our need to remain active on the global stage”.

“That Hong Kong has no place for even such moderate views like ours underscores the absurdity of Chinese Communist rule.”

China imposed the contentious law on its self-governing territory on June 30, circumventing the local legislature, in a move condemned by some Western governments and rights groups as well as activists in Hong Kong.

Critics of the law fear it will crush freedoms in a city that is a world financial hub, prompting some to flee overseas. But supporters say the security legislation is needed to restore stability and order to the former British colony after a year of sometimes violent anti-government protests.

Law told Al Jazeera that while the coronavirus may have resulted in fewer demonstrations taking place, the protest movement has not ended entirely.

“Under COVID-19 and the national security law, it is very unlikely in Hong Kong that there will be large demonstrations like we had last year,” Law said.

“But people are still voicing opposition and doing a lot like expressing that sentiment online so the movement is still alive, it just needs another opportunity to express these sentiments.”

Al Jazeera’s Divya Gopalan, reporting from Hong Kong, said the issuing of arrest warrants on Friday was a strategic move by China.

“Basically, Beijing is trying to drum up grassroots support. They are recovering from the coronavirus pandemic and one of the main nationalistic areas of support is tightening its grip on Hong Kong. So it’s sending a very clear message that it has control over Hong Kong people, no matter where they are,” she said.

“And on top of that, it’s sending a message to the international community,” Gopalan added. “One of the main tenets of this national security law was that it has no borders. No matter where you are, who you are, whether you are from Hong Kong or not, you could break this law. And China, by showing how long its reach could be, it’s sending another message to those countries like the US, UK, Australia and Canada that had condemned the implementation of the national security law.”

In just a month since the legislation came into effect, a dozen leading pro-democracy campaigners have been disqualified from running in legislative elections and four students have been arrested on suspicion of “inciting succession” with social media posts.

Several countries have since suspended their extradition treaties with Hong Kong, including the UK, Australia, Canada and most recently Germany, as a possible safeguard against attempts to use the national security laws to round up activists abroad.

“We have repeatedly made our expectation clear that China lives up to its legal responsibilities under international law,” German Foreign Minister Heiko Maas said on Friday just after Hong Kong leader Carrie Lam postponed the city’s legislative election by a year.

The vote was initially scheduled to take place on September 6, but Lam said a delay was “essential” to control the city’s worsening coronavirus outbreak.

But critics accused the government of using the disease outbreak as an excuse, with Emily Lau, a senior member of the opposition Democratic Party, saying authorities were delaying the vote “because they are afraid they would lose”.

“Who is she [Lam] trying to fool?” Lau told Al Jazeera. “I think it’s quite laughable.” 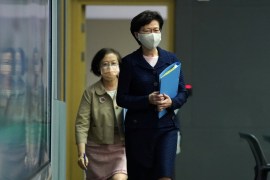 Delay by a year slammed by pro-democracy supporters who accuse authorities of using virus as excuse to avoid defeat. 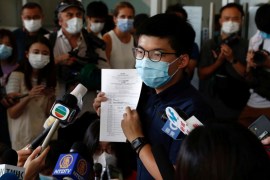