Assembly of the world’s largest nuclear fusion reactor has begun in Cadarache, south of France.

ITER will be the first fusion device to produce net energy, maintain fusion for long periods of time and test the integrated technologies, materials, and physics regimes necessary for the commercial production of fusion-based electricity, according to the consortium.

French President Emmanuel Macron, in a recorded address, spoke on Tuesday of the project’s potential.

“Imagine, if the experience works, if it can find industrial applications, we will have developed a non-polluting, carbon-free, safe and almost waste-free energy, that will simultaneously meet the needs of all areas of the globe and meet the climate challenge and preserve natural resources,” he said.

“With fusion, nuclear energy can be an industry of the future, even more so than it is already today. ITER is clearly an act of confidence in the future,” he added. 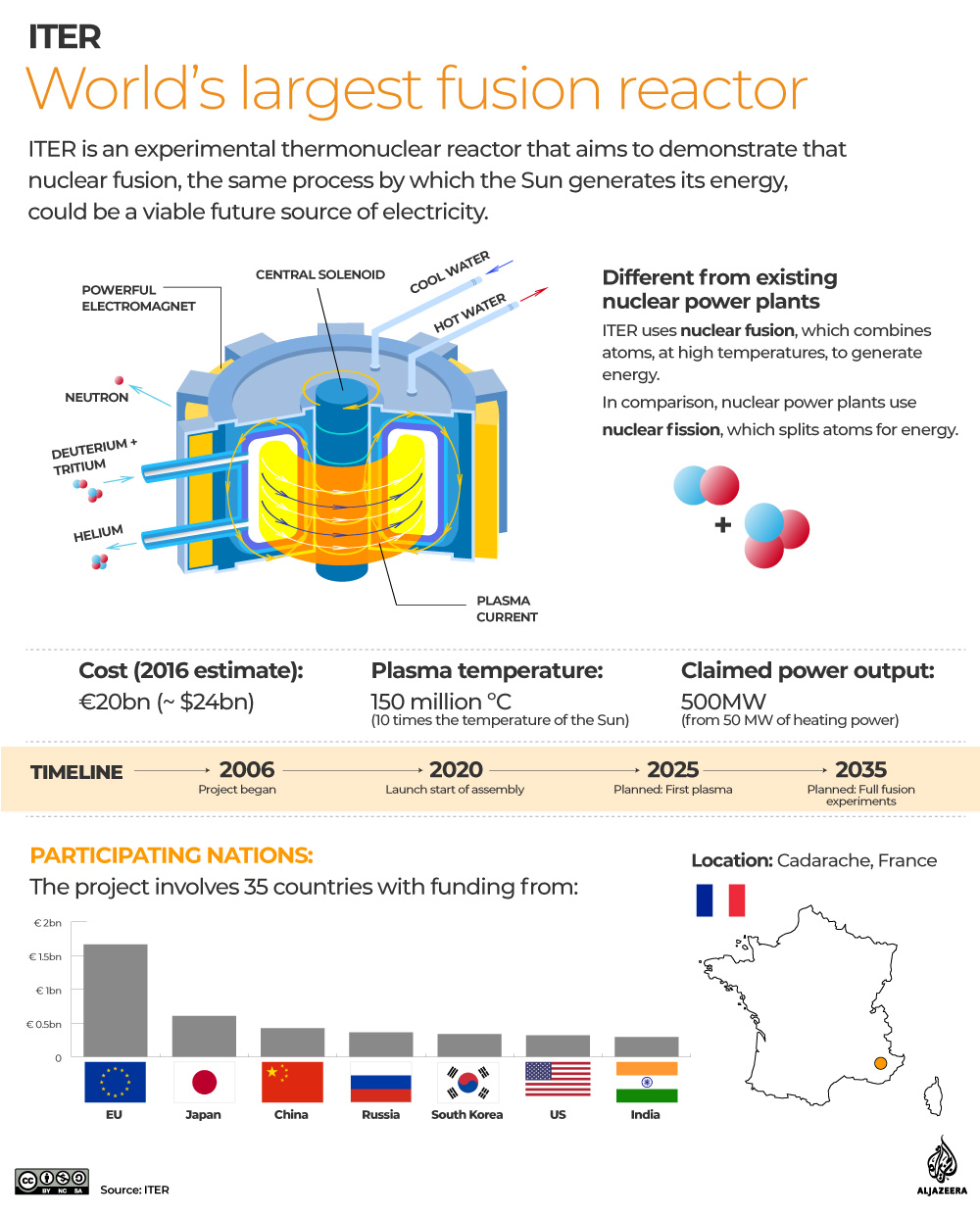 The vast international experiment is designed to demonstrate that nuclear fusion can be a viable source of energy.

Scientists have long sought to mimic the process of nuclear fusion that occurs inside the sun, arguing that it could provide an almost limitless source of cheap, safe and clean electricity.

Unlike in existing fission reactors, which split plutonium or uranium atoms, there is no risk of an uncontrolled chain reaction with fusion, and it doesn’t produce long-lived radioactive waste.

A joint project to explore the technology was first proposed at a summit between US President Ronald Reagan and Soviet leader Mikhail Gorbachev in 1985, with the aim of “utilising controlled thermonuclear fusion for peaceful purposes … for the benefit for all mankind”.

It took more than 20 years for work to begin. The project’s members settled on a design that uses a doughnut-shaped device called a tokamak to trap hydrogen that’s been heated to 150 million degrees Celsius (270 million Fahrenheit) for long enough to allow atoms to fuse together.

The process results in the release of large amounts of heat. While ITER will not generate electricity, scientists hope it will demonstrate that such a fusion reactor can produce more energy than it consumes.

There are other fusion experiments, but ITER’s design is widely considered the most advanced and practical.

Scientists will not know until 2035, after a decade of testing and upgrades, whether the device actually works as intended.