At least two protesters have been killed in Iraq’s capital, Baghdad, during renewed overnight demonstrations against corruption, unemployment and poor public services.

The deaths reported on Monday by human rights monitors and officials were the first during anti-government rallies since Iraq’s new Prime Minister Mustafa al-Kadhimi was sworn into office in May.

The square has been the epicentre of a protest movement that erupted in October last year but had died down in recent months due to the coronavirus pandemic.

“Over the past few days, we have seen a surge in demonstrations taking place, not just in Baghdad but also in the southern provinces,” Foltyn said.

“People are driven by the lack of services and electricity, just as the country is going through a major heatwave,” she added.

In Baghdad, dozens of protesters clashed with police and other security forces stationed in Tahrir Square.

Since taking office after months of political deadlock, al-Kadhimi had promised a dialogue with protesters and had requested comprehensive lists of all those who have been killed and wounded throughout the months-long protests in a bid to bring about accountability and compensation.

In a statement overnight, his office acknowledged “unfortunate events” in protest squares, but insisted security forces had been instructed not to use violence unless absolutely necessary.

It said the government would carry out an investigation into Sunday’s events to hold those responsible accountable.

But online, activists were already comparing the new prime minister to his predecessor, Adel Abdul Mahdi, who stepped down last year in the face of growing protests.

Some 550 people were killed in that wave of rallies and another 30,000 wounded, many of them by military-grade tear gas canisters that can pierce human skulls if fired directly – rather than lobbed at an arc – to disperse crowds.

An implosion of oil prices as a result of the coronavirus pandemic has also forced the government to impose austerity measures that have made it more difficult for people to get by in their daily lives, which could also give rise to renewed demonstrations. 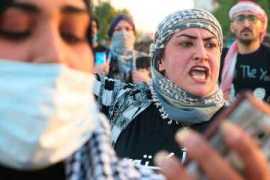 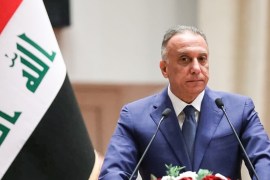