US President Donald Trump commuted the sentence of his longtime friend and adviser Roger Stone on Friday, sparing him from prison after he was convicted of lying under oath to legislators investigating Russian interference in the 2016 US election.

Trump’s decision to commute Stone’s sentence days before he was due to report to prison marked the Republican president’s most assertive intervention to protect an associate in a criminal case and his latest use of executive clemency to benefit an ally.

Democrats condemned Trump’s action as an assault on the rule of law.

“Roger Stone has already suffered greatly,” the White House said in a statement. “He was treated very unfairly, as were many others in this case. Roger Stone is now a free man!”

The announcement came just minutes after an appeals court in Washington, DC denied Stone’s request to postpone his surrender date.

Stone told The Associated Press news agency Trump called him on Friday evening to tell him he was off the hook.

“The president told me that he had decided, in an act of clemency, to issue a full commutation of my sentence, and he urged me to vigorously pursue my appeal and my vindication,” Stone told the agency by phone from Fort Lauderdale, Florida, where he was celebrating with friends.

He said he had to change rooms because there were “too many people opening bottles of champagne here”.

A commutation does not erase Stone’s felony convictions in the same way a pardon would, but it would protect him from serving prison time as a result.

White House press secretary Kayleigh McEnany called Stone a “victim of the Russia Hoax that the Left and its allies in the media”.

Adam Schiff, chairman of the House of Representatives Intelligence Committee, said: “With this commutation, Trump makes clear that there are two systems of justice in America: one for his criminal friends, and one for everyone else.”

The top Democrat on the Senate Intelligence Committee, Mark Warner, added: “The United States was founded on the rule of law. It seems our president has nothing but contempt for it.”

Stone, 67, was sentenced to 40 months in prison in February after being convicted on seven counts of lying to Congress, obstruction of justice and witness tampering. The charges stemmed from Special Counsel Robert Mueller’s investigation which detailed Russian meddling in the 2016 election to boost Trump’s candidacy.

Stone was one of several Trump associates charged in Mueller’s inquiry.

Just had a long talk with #RogerStone. He says he doesn’t want a pardon (which implies guilt) but a commutation, and says he thinks #Trump will give it to him. “He knows I was under enormous pressure to turn on him. It would have eased my situation considerably. But I didn’t.”

Scott Anderson, a visiting fellow at the Brookings Institution, called Trump’s decision a “remarkable move” that was likely to incur political costs ahead of November’s presidential election.

“This appears to be an indication either that the president is acting non-strategically, that’s he acting somewhat emotionally or perhaps that he sees his political future, whether it’s in the White House or perhaps in some other role as lying with his political base, who buy into the narrative of the deep state that he is using to justify this,” Anderson told Al Jazeera.

Trump has repeatedly lashed out at Twitter about Stone’s case, accusing prosecutors of being corrupt, the juror forewoman of political bias and the judge of treating his friend unfairly.

Two months in jail for a Swamp Creature, yet 9 years recommended for Roger Stone (who was not even working for the Trump Campaign). Gee, that sounds very fair! Rogue prosecutors maybe? The Swamp! @foxandfriends @TuckerCarlson

One of them, Aaron Zelinsky, testified to the Judiciary Committee of the US House of Representatives last month that his office received “heavy pressure from the highest levels of the Department of Justice” to ease its sentencing recommendation.

Zelinsky said Tim Shea, the acting US attorney at the time who was appointed by Barr, ultimately caved in to the pressure because he was “afraid of the president”.

The US constitution gives a president the “power to grant reprieves and pardons for offenses against the United States, except in cases of impeachment”. Trump’s use of this executive clemency often has benefitted allies and well-connected political figures.

He also commuted the prison sentence of Democratic former Illinois Governor Rod Blagojevich, who had been a contestant on Trump’s former reality TV show. 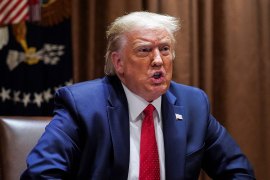 Court opinions reject the argument that president has immunity from prosecution, but unclear if finances released soon. 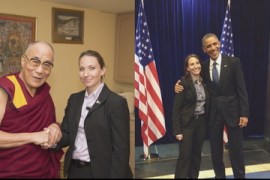 Whistle-blower protection: Calls to defend those who speak up

Experts say for reform to be meaningful, it must reach the top of law enforcement leadership. 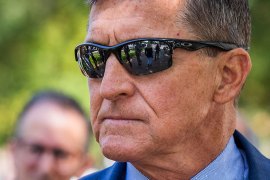 The court sided with Flynn who had been seeking to withdraw a guilty plea in which he admitted lying to the FBI.