Italy’s foreign minister has made an unannounced visit to the Libyan capital, Tripoli, where he held talks with Fayez al-Sarraj, prime minister of the country’s internationally-recognised government.

The trip by Luigi Di Maio on Wednesday came weeks after forces loyal to the UN-brokered Government of National Accord (GNA) repelled a 14-month-long offensive by eastern-based renegade military commander Khalifa Haftar.

Di Maio and al-Sarraj stressed “the need to resume the political process and end foreign interference” in Libya, according to a statement released by the GNA prime minister’s office.

The North African country, a major oil producer, has been mired in chaos since a 2011 NATO-backed uprising that toppled and killed longtime ruler Muammar Gaddafi.

Since 2014, it has been split between rival factions based in Tripoli and in the east, in a sometimes chaotic war that has drawn in outside powers and a flood of foreign arms and mercenaries. 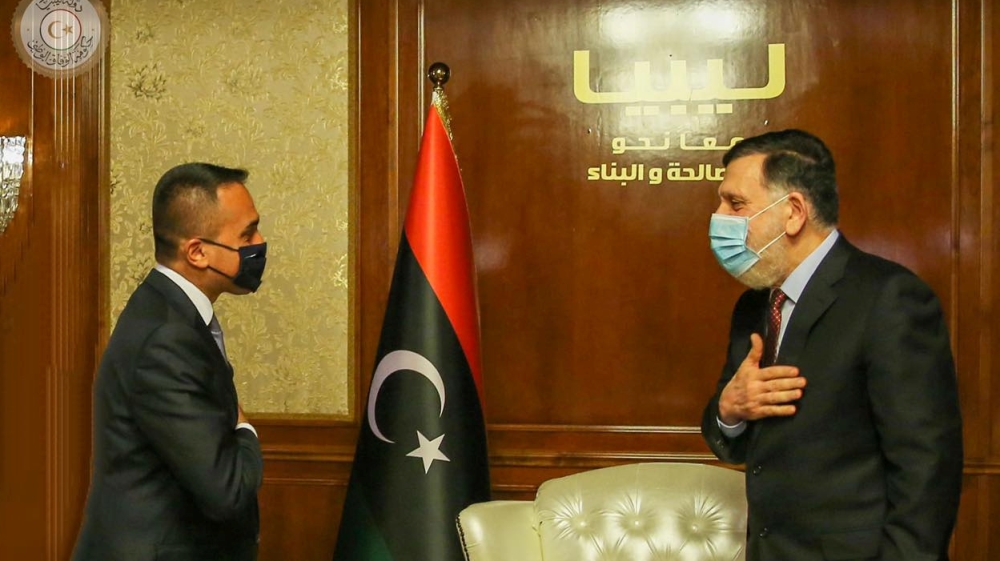 Referring to a naval operation launched by the European Union in the Mediterranean to enforce an arms embargo on Libya, al-Sarraj said enforcement needed to be “global”, covering maritime, land and air routes.

Al-Sarraj, whose government has received weapons from Turkey, has previously criticised Operation Irini on the grounds it favours eastern-based Haftar, who takes delivery of arms overland and via air.

“Italy will ensure Irini is geografically balanced and can work effectively,” Di Maio told journalists on his return to Rome.

Egypt, Russia and the United Arab Emirates (UAE) have all supported Haftar.

Di Maio also told reporters that he conveyed to al-Sarraj Italy’s concerns about a possible attack on Sirte, which he said could lead to renewed fighting and more civilian casualties.

“I stated how essential it is to avoid a freezing of the conflict, and that this possibility would lead to a de facto division of the country,” he said.

Earlier this week, Di Maio said the need for a ceasefire is urgent given the Egyptian threat and called for the strong enforcement of the arms embargo, in place since 2011.

The Arab League on Tuesday called for the withdrawal of foreign forces in Libya and urged talks on ending the conflict in the North African country.

Cairo has warned that advances by Turkey-backed forces on Sirte could prompt an Egyptian military intervention.

The GNA denounced Egypt’s statements as a “declaration of war”.