North Korea blew up an inter-Korean liaison office building on Tuesday after issuing a series of threats in a significant escalation with South Korea as years of diplomatic progress quickly fades away.

Seoul’s Unification Ministry said the destruction of the building in the North Korean border town of Kaesong happened at 2:49pm local time (05:49 GMT). South Korean media reported a large explosion was heard and smoke could be seen rising over Kaesong.

Black-and-white surveillance video released by South Korea’s defence ministry showed a large blast that appeared to bring down the four-storey structure. The explosion also appeared to cause a partial collapse of a neighbouring 15-storey high-rise that had served as a residential facility for South Korean officials who staffed the liaison office.

The North – which has a long track record of pressuring South Korea when it fails to extract concessions from the United States – has repeatedly bashed the South in recent weeks over declining bilateral relations and its inability to stop leafleting by defectors and activists.

Pyongyang’s official Korean Central News Agency said the North destroyed the office to “force human scum and those who have sheltered the scum to pay dearly for their crimes” – apparently referring to North Korean defectors who for years have floated anti-Pyongyang leaflets across the border.

The inter-Korean liaison office was established in 2018 as part of a series of projects aimed at reducing tensions between the two Koreas.

The destruction of the office “broke the expectations of all people who hope for the development of inter-Korean relations and lasting peace on the peninsula”, deputy national security adviser Kim You-geun told a briefing.

“We’re making clear that the North is entirely responsible for all the consequences this might cause,” he said.

“The United States fully supports the ROK’s efforts on inter-Korean relations and urges the DPRK to refrain from further counterproductive actions,” a State Department spokesperson said, referring to the South and North by their official names.

When the office was operating, dozens of officials from both sides would work in the building, with South Koreans travelling each week into the North. The office has been closed since January over coronavirus fears.

In recent days, Pyongyang has made several threats against Seoul and threatened to destroy the office if defector groups there continue with their campaign to send propaganda leaflets and other material across the border.

On Saturday, Kim Yo Jong, the influential sister of North Korea’s leader Kim Jong Un, warned that Seoul will soon witness “a tragic scene of the useless North-South liaison office being completely collapsed”.

She also said she would leave to North Korea’s military the right to take the next step of retaliation against South Korea.

Robert Kelly, a Koreas analyst from Pusan National University, said while the leaflets were cited as the reason for blowing up the office, North Korea has been seeking to bring other grievances back into the international spotlight, including crippling US sanctions.

“They’ve never taken serious action like this, it is actually quite surprising,” Kelly told Al Jazeera. “It is reflective of larger things – the North Koreans are disappointed that South Korean President Moon Jae-in has been able to achieve so little. The Americans have pushed the South Koreans very hard not to cut a deal with North Korea.”

Al Jazeera’s Rob McBride, reporting from Seoul, said the incident is “very serious development”, but added it was “not completely out of the blue”.

“There have been increasingly threatening noises from North Korea, especially in the past week.”

Earlier on Tuesday, North Korea’s military also threatened to move back into zones that were demilitarised under inter-Korean peace agreements, as the communist country continued to dial up pressure on rival South Korea.

The Korean People’s Army said it was reviewing a governing party recommendation to advance into unspecified border areas and “turn the front line into a fortress”.

Several defector-led groups have been sending leaflets – together with food, one-dollar bills, mini radios and USB sticks containing South Korean dramas and news – over the border and said they will continue with their campaign this week, despite North Korean threats and South Korea saying it will take legal action.

Inter-Korean relations have been strained since the breakdown of a second summit between Kim and US President Donald Trump in Vietnam in early 2019. That summit fell apart because of disputes over how much sanctions should be lifted in return for Kim’s dismantling his main nuclear complex.

Kim later promised to expand his nuclear arsenal, introduce a new strategic weapon, and overcome the US-led sanctions that he said “stifles” his country’s economy.

Some analysts say North Korea appears to be using the leaflet issue as an excuse to increase pressure on South Korea amid stalled denuclearisation talks.

“The leaflets are an excuse or justification to raise the ante, manufacture a crisis, and bully Seoul to get what it wants,” said Duyeon Kim, a senior adviser at the International Crisis Group, a Belgium-based independent non-profit organisation.

Last week, North Korea severed hotlines with South Korea as the first step towards shutting down all contact with Seoul.

On Monday, Moon urged Pyongyang to keep peace agreements reached by the two leaders and return to dialogue. 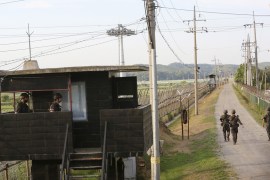 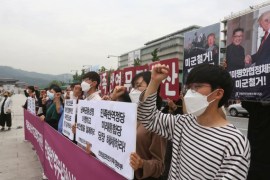 Seoul urges Pyongyang to honour deal between rival Koreas as Kim Jong Un’s sister hints of a ‘break’ in ties. 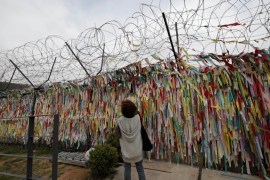 North lashed out at neighbour for holding military exercises, as Kim Jong Un sent message of praise to Xi Jinping.