US and Iraq officials have agreed to reduce the number of American troops in the Middle East country in the coming months but, following resumption of dialogue, fell short of providing a timeframe.

The decision was announced on Thursday following the long-anticipated talks, the first strategic dialogue between the two countries in a decade.

Chaired by the Senior Under Secretary of Iraq’s Ministry of Foreign Affairs, Abdul Karim Hashem Mustafa, and US Under Secretary for Political Affairs David Hale, the talks were limited to a short preliminary online session due to coronavirus-related travel restrictions.

They laid out the agenda for what is expected to be a months-long discussion focused on US troops’ withdrawal along with the future of security, counterterrorism, political, economic and cultural relations.

In a joint statement issued on Friday, the US reiterated its commitment to withdrawing its troops from Iraq but fell short of announcing a timeline.

“In light of significant progress towards eliminating the ISIS [or ISIL] threat, over the coming months the US would continue reducing forces from Iraq and discuss with the Government of Iraq the status of remaining forces as both countries turn their focus towards developing a bilateral security relationship based on strong mutual interests,” the statement said.

“The United States reiterated that it does not seek nor request permanent bases or a permanent military presence in Iraq.”

The statement added that in-depth discussions addressed at the opening session would likely resume in July in the US capital.

“This is a months-long dialogue aimed at setting principles that have the potential to shape the nature of US-Iraqi relations for this decade,” said independent Iraqi analyst Sajad Jiyad.

“There will eventually be an agreement … but it will not play out in practice right away. The dialogue will be over the long term, perhaps beyond the life of the current Iraqi government,” he added.

While observers saw the talks as a positive step, they see little change to the status quo.

“The statement and dialogue set the tone for a more cooperative relationship moving forward. They also signal Iraq’s intention to rebalance its external relations with all partners,” said Fanar Haddad, an Iraq expert and research fellow at the National University of Singapore.

“The dialogue sought to order the current status quo and structure US troop presence. That is the limit of what we were expecting and that is what has emerged – lending structure to the status quo,” he added.

Both Jiyad and Iraqi MP Sarkawt Shams agreed that the course of the discussion will also depend on the result of the US election scheduled for November, further adding to the likelihood of a drawn-out dialogue.

“This is just an introduction. Depending on whether Trump or someone else is elected, the course of the discussion and understanding reached between both sides will change,” said Shams, a member of the Kurdish Future bloc.

The US military returned to Iraq in 2014 to help support the government in its fight against ISIL which had taken over large swaths of the country.

But calls for a complete withdrawal of US troops peaked and US-Iraq tensions rose following deadly rocket attacks on US military and diplomatic sites and the killing of Iran’s elite Quds Force commander, General Qassem Soleimani, and deputy of Iraq’s Hashd al-Shaabi, Abu Mahdi al-Muhandis, in a US airstrike in the capital, Baghdad, on January 3.

The US-led coalition has since pulled out from six bases and consolidated its presence to only three.

Some Iran-backed groups that led the calls for withdrawal have softened their tone in recent weeks.

Kataeb Hezbollah – which the US has blamed for attacks on its bases – said it would wait to assess the outcome of the first session before taking a formal stance.

Another Iran-backed group, Asaib Ahl al-Haq, appeared to draw down calls for an immediate withdrawal with its leader Qais al-Khazali saying on Thursday that a US presence should fall within the bounds of Iraqi law.

Shams told Al Jazeera that the joint statement “might appease some of the militias”.

“While the joint statement showed the US was serious about not seeking a permanent base in Iraq, it also showed neither side wants an immediate withdrawal,” Shams said.

Haddad agreed, saying that the statement “might be satisfactory for the militias as it neutralises populist discourse about US troop withdrawal”.

“But rocket attacks are not likely to disappear because they are tied to regional dynamics and particularly US-Iranian tensions,” he said.

In the joint statement, Iraq has promised to protect US bases on its soil.

Both sets of officials emphasised that the talks, which the US initiated in April, build upon the 2007 negotiations that culminated in the signing of the Strategic Framework Agreement (SFA) and Status of Forces Agreement (SOFA) the following year.

The agreements have since provided a framework for US-Iraq relations and committed to an eventual withdrawal of US troops from Iraq.

“This dialogue is founded on the concept of [Iraqi] sovereignty … taking into consideration the opinion of the Iraqi parliament, marji’iya [Iraq’s top Shia authority], political blocs and the interest of Iraq,” said Iraq’s newly appointed Prime Minister Mustafa al-Kadhimi at a press conference on Thursday.

“These [talks] are a continuation of dialogue that started in 2008. The objective of these talks is to structure our security, economic, financial and even cultural relations,” added al-Kadhimi, Iraq’s former intelligence chief who is considered close to the US.

Echoing Kadhimi, US Assistant Secretary for Near Eastern Affairs David Schenker told reporters that the US was keen to support Iraq not just on security issues but on economic and cultural matters as well.

The statement said that both countries would work on helping Iraq implement governmental and reforms programmes “in a manner that reflects the aspirations of the Iraqi people”, adding that the US could provide economic advisors to help enact those plans.

Iraq faces a sharp financial crisis due to the coronavirus pandemic and plunging oil prices which its economy is heavily reliant on.

“Since 2003, Iraq has relied on oil to make up 95 percent of its revenue. Due to the collapse of the oil prices, and past mismanagement and lack of strategic planning, we are now facing a real crisis,” al-Kadhimi said. 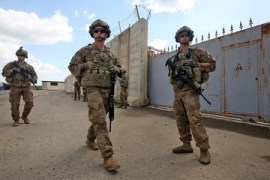 What next for US troops in Iraq?

Talks begin on a potential easing of the US military presence in Iraq. 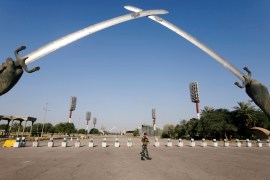