Six people were killed and dozens of others wounded in the attacks, the interior ministry said in a statement, which included as many as 80 rocket strikes.

The transport ministry said one of the damaged planes was preparing to fly to Spain to retrieve Libyans stranded in Europe by the coronavirus lockdown.

Video shared by an airport worker showed black smoke billowing over the apron. Photographs showed shrapnel damage sprayed across the nose of a passenger plane.

The attack on Saturday was the latest to target Mitiga International Airport in Libya’s capital, the seat of the country’s internationally recognised Government of National Accord (GNA). Haftar’s eastern-based forces have been trying to seize Tripoli since April last year.

Damage was visible in several areas of Tripoli including the Rixos Hotel, Nasser Forest, and the Bab Ben Ghashir district after the bombardment. The area was cleared of civilians by the GNA forces to ensure the safety of the population, officials said.

Saturday’s attacks came hours after the UN Support Mission in Libya condemned the indiscriminate attacks on civilians in Tripoli, saying they “may amount to war crimes”.

The airport has repeatedly been attacked by Haftar’s Libyan National Army (LNA), which in April last year launched an operation to capture Tripoli from the GNA. Civilian flights stopped in March because of frequent shelling even before the country imposed a lockdown over the coronavirus pandemic

“Haftar’s forces say that there is a drone launcher in that airport … Turkish drones to target Haftar forces’ locations in the south and many other locations,” Abdelwahed said.

According to the United Nations, four-fifths of the 130 civilian casualties recorded in the Libyan conflict in the first quarter of the year were caused by LNA ground fighting.

Late on Thursday, Turkey and Italy said the area around their embassies in Tripoli was shelled, leading the European Union to condemn the incident, which it said was “attributal to Haftar’s forces”.

LNA spokesman Ahmed al-Mismari denied the LNA had shelled the area. He has not yet commented on Saturday’s shelling at Mitiga.

Turkey supports the GNA and has signed a military cooperation agreement with it to help the fight against Haftar’s LNA, which is backed by the United Arab Emirates (UAE), Egypt and other countries.

The attack came days after at least five civilians were killed in shelling blamed on the LNA and followed the launch of an operation by the GNA to seize the key al-Watiya airbase, southwest of Tripoli, from Haftar’s forces.

Libya has been in turmoil since 2011, when a NATO-backed uprising toppled longtime leader Muammar Gaddafi, who was later killed.

For years, the country has been split between the rival administrations in the east and the west, each backed by armed groups supported by an array of foreign powers.

This week the UN again raised alarm that ordinary Libyans are bearing the brunt of an increasingly deadly siege by eastern-based forces under Haftar’s command.

The fighting has killed hundreds of civilians and displaced over 150,000, threatening to push Libya into a major conflagration on the scale of the 2011 uprising. 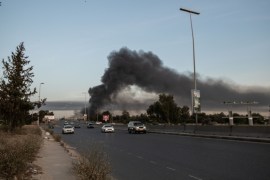 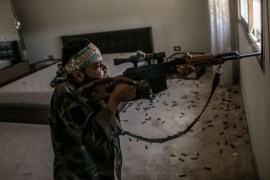