The Joint Chiefs of Staff in Seoul said North Korean troops fired several bullets at a South Korean guard post inside the heavily fortified border between the two countries at 7:41 am on Sunday.

South Korea fired two rounds in response after issuing a warning broadcast, the military said in a statement, adding it suffered no casualties.

“We are taking actions via inter-Korean communication lines to grasp the detailed situation and to prevent any further incidents. And we also maintain a necessary readiness posture,” it said.

The South Korean military later said the North Korean gunshots were “not deemed intentional”, according to Yonhap news agency.

Shots fired by North Korea across its border with South Korea were likely “accidental”, US Secretary of State Mike Pompeo said on Sunday.

“We think those are accidental. South Koreans did return fire. So far as we can tell, there was no loss of life on either side,” Pompeo said on ABC This Week.

Sunday’s exchange of fire took place one day after North Korea reported its leader Kim Jong Un’s first public appearance in about 20 days amid intense speculation about his health.

North Korea’s official media published photographs and a report on Saturday that Kim had attended the completion of a fertiliser plant, the first report of his appearance since April 11.

The Koreas are split along the 248-kilometre-long, 4-kilometer-wide (154-mile-long, 2.5-mile-wide) border region called the Demilitarized Zone that was originally created as a buffer.

But unlike its name, the DMZ is the world’s most heavily fortified border. An estimated 2 million mines are peppered inside and near the DMZ, which is also guarded by barbed wire fences, tank traps and combat troops on both sides.

In late 2018, the two Koreas began dismantling some of their front-line guard posts and removing mines from the DMZ as part of steps to reduce tensions.

But the efforts stalled amid a deadlock in nuclear negotiations between Kim and President Donald Trump meant to convince North Korea to give up its arsenal in exchange for lifting economic sanctions.

The last time there was gunfire along the border was in 2017, when North Korea sprayed bullets at a soldier fleeing to South Korea. 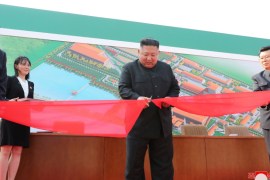 State media report on North Korean leader at ribbon-cutting ceremony after weeks of speculation over his health. 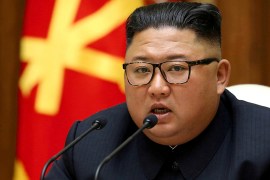 Kim Jong Un has ruled over North Korea with an iron fist, eliminating those who could threaten his position.