Libya’s UN-recognised government accused rival military commander Khalifa Haftar of seeking to stage a new coup after he claimed to have a “mandate” from the people to govern the country.

“It’s a farce and the latest in a long series of coups d’etat,” the Government of National Accord (GNA), which is based in the capital, Tripoli, said in a statement on Tuesday.

“What the war criminal Haftar said was a coup on the democratic path, not new but a continuation of his failed coups and to cover up his repeated defeats,” it added.

The oil-rich North African nation has been gripped by chaos since the downfall and killing of longtime dictator Muammar Gadaffi in 2011, with rival administrations in the east and west vying for power.

Haftar, who controls swaths of eastern Libya and in April last year launched an offensive to seize Tripoli, on Monday said his army had “accepted the will of the people and its mandate”.

The leader of the Libyan National Army (LNA) did not make clear however if a parliament elected in 2014 and also based in the east of the country backed his move.

Haftar claims his legitimacy from that parliament, which was forced to move its headquarters after violence ripped apart Tripoli six years ago.

The GNA said Haftar had “turned his back on the parallel political institutions that backed him and designated him” head of the army.

The Tripoli-based government urged Libyans to join “a comprehensive dialogue and continue in the democratic path to reach a comprehensive and permanent solution based on ballot boxes”.

Both sides are supported by a network of fractious militias and foreign powers. Turkey has sent armoured drones, air defences and more recently, Syrian fighters, to prop up the embattled Tripoli government.

Meanwhile, Russia has deployed hundreds of mercenaries to boost Haftar‘s assault. The United Arab Emirates and Egypt also back Haftar.

Washington called for dialogue between the two sides and a “humanitarian” truce.

“The United States regrets … commander Haftar’s suggestion that changes to Libya’s political structure can be imposed by unilateral declaration,” a statement on its embassy’s Twitter account said.

“As civilians continue to suffer during the holy month of Ramadan and the COVID-19 pandemic threatens more lives, we urge the LNA to join the Government of National Accord in declaring an immediate humanitarian cessation of hostilities.”

Commenting on the developments, Kremlin spokesperson Dmitry Peskov said: “Russia remains in contact with all participants in the Libyan process. We believe that there are no other ways to regulate the Libyan problem.”

Earlier on Tuesday, the RIA news agency, citing a foreign ministry source, said Russia was surprised by Haftar’s power grab on Monday as he announced the “end” of a 2015 UN-mediated agreement that produced the GNA.

He made similar remarks in 2017 and three years earlier also appeared on television to say he was taking the reins of power in Libya.

Forces loyal to Haftar attacked residential areas just outside the key stronghold of Tarhouna, south east of the capital Tripoli, which Haftar’s forces have taken over.

Al Jazeera’s Mahmoud Abdelwahed, reporting from Tripoli, said the escalation of violence has focused on areas near the town of Meslata, east of Tarhouna.

He added: “This situation might exacerbate especially that Tarhouna is besieged by government forces who launched a campaign 10 days ago to regain the city. If they do, Haftar’s forces will have lost their control in the west of Libya.”

Haftar has been accused by his detractors of seeking to impose a new military dictatorship in Libya.
His offensive to seize Tripoli has claimed hundreds of lives and displaced some 200,000 people.

The LNA, meanwhile, accused its GNA rivals on Tuesday of staging an attack in which a Turkish drone hit a food truck convoy in the country’s west, killing at least five civilians. 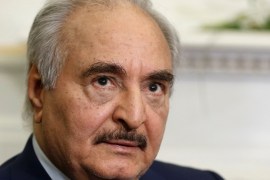 Haftar dismisses UN Libya unity deal as ‘thing of the past’