Jordan has eased tight lockdown restrictions in several southern provinces where no coronavirus cases have been recorded, as the number of new infections across the country appears to ebb.

The relaxation of the measures on Wednesday in the provinces of Karak, Maan and Tafilah came three days after the ending of the lockdown in Aqaba, a port city some 340km (211 miles) south of the capital, Amman. While life within the provinces has slowly begun returning to normal, a ban on travel outside their borders has remained in place in order to keep them virus-free.

On Wednesday, Jordan said it had registered seven new coronavirus cases, bringing its total to 435. The number of recoveries stood at 315 while the death toll remained at seven. According to the health ministry, Jordan has done some 30,000 tests to date.

For many experts, the kingdom’s low figures are due to the early adoption of strict measures to prevent the spread of coronavirus – steps that were taken much quicker than they were in other countries in the region and elsewhere in the world.

“Timing was key for us,” said Bassam Hijjawi, an epidemiologist and a member of the Epidemics Committee, the body spearheading Jordan’s fight against the coronavirus pandemic.

Indeed, the government had already mobilised the committee by late January, just as COVID-19, the highly infectious respiratory disease caused by the new coronavirus, was taking hold in China.

Comprised of healthcare professionals and government officials, the committee on January 26 established several protocols to deal with the arrival of coronavirus, some five weeks before Jordan recorded its first case on March 2.

The king also directed the government to enact the National Defense Law that placed the country under emergency military laws, with the armed forces deployed to enforce a nationwide curfew that also closed shops.

By mid-March, the government began rolling out a series of drastic measures, including shuttering schools, universities and government offices, as well as closing its borders and imposing a tight lockdown

Meanwhile, thousands of repatriated Jordanians were quarantined for a period of 14 days at hotels near the Dead Sea area and in Amman.

While the government’s efforts to keep Jordan coronavirus safe appear to be paying off, Hijjawi warned against the blanket relaxation of the preventive measures in order to avoid a resurgence of the disease at a time when much of the region and the world are still in the throes on the pandemic.

Hailing the country’s response so far, he noted: “As long as Jordan still below an average of 20 cases, it can still manage the situation and move forward.”

Mutaz Debei is a senior data scientist working to develop different mathematical models to predict the behaviour of the pandemic for the Jordanian government. He said the “stringency index” – a score that measures the severity of a government’s response to the crisis – reached 80 percent in mid-March before hitting 100 percent a week later.

Debei noted that the more stringent measures taken by a government, the fewer the infections.

“The correlations between how high or low the stringency index appears to be working in Jordan,” he told Al Jazeera.

Also cautioning that Jordan is not out of the woods yet because of the unpredictable nature of the pandemic, Debei said the government is moving ahead with a plan to develop a mobile application that would track individuals who are placed under quarantine and also make them wear an electronic bracelet to follow their movements.

With only 113 active coronavirus cases, Jordan so far seems to be successful in its attempt to “flatten the curve” – slowing the spread of the contagion in a bid to prevent the healthcare system from being overrun.

With certain industries now gradually reopening, after the strict lockdown measures brought Jordan’s aid-dependent economy to a standstill, Debei said the government is also significantly expanding its coronavirus testing programme – described by the World Health Organization as the best way to slow the advance of the pandemic. 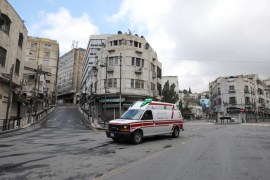 Jordan authorises use of hydroxychloroquine to treat COVID-19

As leading doctors warn of widespread infection in Jordan, hospitals can now use malaria drug for serious conditions. 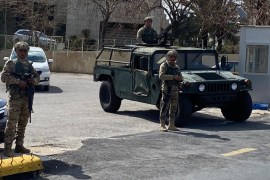