Israeli activist Ayman Haj Yahya has been identified as the individual indicted for allegedly spying for Iran after he was arrested on March 16 by the internal security agency Shin Bet and Israeli police.

Haj Yahya – a well-known political leader and activist within the Palestinian community in Israel – was accused of having contacts with Iranian intelligence to recruit Arab citizens in Israel.

He was charged in court in the central city of Lod with “serious infringement of the security” of Israel on Sunday.

Israeli authorities allege that Haj Yahya was in contact with Iranian agents during a trip to Europe and also communicated with a member of the Popular Front for the Liberation of Palestine (PFLP) group in Lebanon.

Haj Yahya had been a leading member of the Arab-nationalist political party Balad that won three seats in the Israeli Knesset in the last election. Balad is part of the Joint List alliance, which collectively won 15 seats, making it the third-largest political party in Israel.

Haj Yahya left Balad in 2014 over the party’s position on the Syrian civil war to establish his own political movement, which advocated for a boycott of elections and Palestinian integration into Israel’s political system.

A senior member of Balad, speaking to Al Jazeera on condition of anonymity because of the sensitivity of the case, said the allegations against Haj Yahya were “political charges”.

A request for comment from Israeli police was not answered by the time of publication.

Yonah Jeremy Bob, an Israeli intelligence analyst with the Jerusalem Post in Israel told Al Jazeera that, based on available information, the case against Haj Yahya did not tantamount to a full-fledged espionage operation against Israel.

“It is too early in the case and the gag order is still too broad to know anything for certain. The available information indicates the spying charges are general and did not necessary lead to any kind of specific disaster,” he said.

“If so, the charges may lead to a less severe prison sentence than for a person accused of spying activities which concretely endangers a major state secret or a person who undertook violent actions themselves against Israel.”

Israel law bars its citizens from having contacts with Iran, Hezbollah, Hamas and others Israel considers its enemy or “terrorist organisations”, he noted, also speaking anonymously.

“As Palestinian Arabs in Israel, we don’t see eye to eye with Israel’s political and security parameters,” he said.

He pointed out to the case against Sheikh Raed Salah, a leader of the Islamic Movement in Israel, who was sentenced to 28 months in prison for “inciting terror” for protesting against Israeli attempts to control Al Aqsa Mosque in Jerusalem, Islam’s holiest site in Palestine.

He also highlighted the case of former Knesset member and Palestinian leader Azmi Bishara, who now lives in Qatar.

Bishara resigned his Knesset seat in 2007 after he was indicted for “aiding the enemy” during the 2006 war in Lebanon. Fearing arrest, he moved to Egypt and has not returned because of what he called a “racist climate” in Israel.

Commenting on the charges against him, Bishara said in an interview with Al Jazeera in 2007 that Israel tends to prosecute Palestinians who have contacts with the Arab world and the Middle East region  to avoid admitting the separate national character of its Arab Palestinian citizens.

“Actually we do not accept that the enemies of Israel are our enemies as Arabs and Palestinians. We think we are part of the Arab world too, and not only citizens of the state of Israel,” he said. 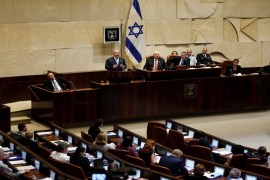 Legislation submitted by Arab members of parliament called for Israel to treat its Arab and Jewish citizens equally.

If passed, the law will define Israel exclusively as nation of Jewish people, marginalising 1.8 million Palestinians. 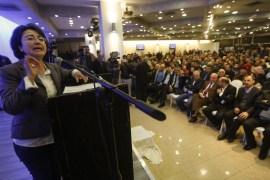