Several people are feared dead and many more are missing after heavy rainfall caused flash floods and landslides in parts of western Kenya.

Local media on Sunday reported that the rains swept away several houses and a police post in Chesogon trading centre between the counties of Elgeyo Marakwet and West Pokot. The current was strong enough to uproot trees and sweep them along in a fast-moving tide.

Pokot Central sub-county Deputy Commissioner Simiyu Were told tuko.co.ke that some police officers had been trapped in the floods.

West Pokot was one of the areas badly damaged by heavy rains in November and December of 2019 when more than 40 people died after massive landslides. The Chepera Bridge, which was swept away at the time, has still not been replaced, cutting off the village of Chesogon from road rescue possibility.

This is the period of the “Long Rains” in East Africa when the wind swings around and comes in from the Indian Ocean. It is moisture-laden and readily drops tonnes of water on Tanzania, Kenya, Uganda and Ethiopia.

The East African Plateau forces the air upwards, producing general rainfall, and the mountains create the real risk of severe thunderstorms and flash floods. Kenya is particularly prone to landslides caused by heavy rain running off mountain slopes, especially where humans have changed the ecosystem by deforestation.

This rainy season is at its most intense between April and June as the Intertropical Convergence Zone of intense thunderstorms moves north over East Africa, following the sun and prior to the monsoon bursting over India. 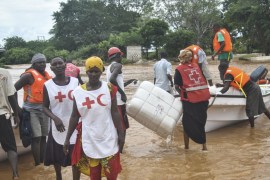 Heavy downpours in recent weeks have killed scores of people and raised the threat of cholera.