North Korean leader Kim Jong Un has skipped one of Pyongyang’s most important and largest holidays – the birthday commemoration of his grandfather and the country’s founder, Kim Il Sung – marking his first absence from the ceremony since taking power in 2011.

Among the senior officials in attendance were Pak Pong Ju, who has twice served as the country’s premier, as well as Choe Ryong Hae, a military official and the head of North Korea’s assembly who is under US sanctions.

Another image showed military officers carrying a wreath as they marched ahead of the senior officials in front of an oversized statue of Kim Il Sung and his successor Kim Jong Il, the late father of the current leader.

Wednesday’s commemoration is also known as the “Day of the Sun” – in reference to the leader who led North Korea after it split from the south.

Current leader Kim Jong Un’s sister and close aide, Kim Yo Jong, who is in charge of propaganda affairs and is suspected to be the reclusive country’s second-in-command, was also not present at the event.

As recently as Monday, it was reported that Kim Jong Un had ordered a reshuffle of the State Affairs Commission – the North’s highest decision-making body – replacing more than a third of its members, including two officials who served as foreign ministers, Ri Yong Ho and Ri Su Yong.

NK News, a news website dedicated to North Korea, quoted Korea watcher and analyst Peter Ward as saying that Kim Jong Un’s absence could suggest a change in priorities in the country’s propaganda, or that the young leader may be suffering from health issues.

In the photo, the North Korea leader was shown taking part in a meeting with officials of the Central Committee of the Worker’s Party of Korea.

On Tuesday, the eve of South Korea’s parliamentary elections and Kim Il Sung’s birth anniversary, North Korea fired cruise missiles towards the Sea of Japan, in a major show of force.

The back-to-back missile launches from the ground and air were the most high-profile among a series of weapons tests that North Korea has conducted recently amid stalled nuclear talks with the United States, and outside fears about a possible coronavirus outbreak in the country.

Pyongyang has insisted that the country is free of the coronavirus, although it has ordered a quarantine on more than two thousand people, and over 300 foreigners due to the disease. 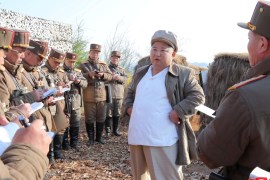 South Korea says the projectiles were fired from the North’s eastern Kangwon province on Tuesday morning. 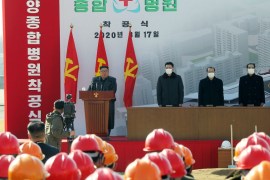 North Korea insists it is free of coronavirus

The nuclear-armed nation shut down its borders in January after the virus was first detected in neighbouring China. 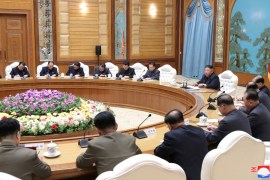 Coronavirus pandemic is ‘a great disaster threatening the whole mankind, regardless of borders’, says state-run KCNA.