Rome, Italy – Italy will remain in full lockdown until May 3 to stem the tide of new coronavirus infections, Prime Minister Giuseppe Conte announced on Friday.

“If we gave up now, we would put all the positive results achieved so far at stake and restart with a new rise in the death toll,” Conte said.

The country has already spent a month under strict measures limiting the freedom of movement of its citizens.

Since February 20, when coronavirus was first detected in the northern town of Codogno, Italy has recorded the world’s highest death toll.

On Friday, the country’s Civil Protection agency announced that deaths rose by 570 within 24 hours to 18,849. This was an increase of 3.1 percent, the lowest daily growth since the beginning of the outbreak.

The infection rate has slowed since April began and, after weeks struggling with a surge of patients in critical condition, health facilities are experiencing some relief. A week ago, there were 4,068 people being treated in intensive care units. By Friday, that number had dropped to 3,497.

These trends are opening space for speculation about entering into a possible “phase two” – a period during which economic activities could reopen, and citizens regain some limited freedom of movement while learning to live with the virus in their midst.

The news about some regional governments using antibody tests to identify asymptomatic cases has contributed to a cautious but growing enthusiasm.

But Conte dashed such hopes on Friday. “We need to keep our attention threshold high,” he said, making a specific reference to the Easter holiday.

The only few concessions announced regard businesses such as timber companies, bookshops and stores selling children’s supplies, which can reopen from April 14.

Conte did, however, leave some spark of hope, stressing that, if the infection rate allows any further easing before May 3, the government would pursue it.

The latest decree comes after health experts advised the government about the risks connected with any relaxation.

“The epidemic curve is still rising, not bending. It has just slowed down,” Walter Ricciardi, executive board member of the World Health Organization (WHO) and consultant for the Italian health ministry, told Al Jazeera.

He underlined that the lockdown could be lifted after the infection rate comes as close as possible to zero. “It must be at least below 0.5 [percent daily growth]” he said.

Ricciardi was also sceptical about the possibilities offered by antibody checks.

“Plenty of serological tests have been introduced into the market, but none of them fulfil the requirements regarding sensibility and specificity entirely.”

“Restrictions on mobility had progressively reduced the infection capacity of every single person by 45 percent as of March 25,” Professor Marino Gatto of Politecnico di Milano told Al Jazeera.

With colleagues from a range of universities, Gatto developed an epidemiological model to understand the full spread of the infection. If it were not for the lockdown, Gatto believed hospitals could not have coped with the wave of admitted patients.

“In the worst-case scenario, health facilities would have faced an additional 200,000 patients,” he said.

The GIMBE Foundation, a leading public health think-tank, has forecasted that new infections would reach the 0.5 percent growth rate only by May 7.

China relaxed its measures only after new infections in Hubei Province dropped to 0.1 percent daily growth.

Ricciardi acknowledged the value of such academic forecasts, but stressed that every decision should be based only on real data.

“The time needed to slow down the infection here looks higher than in Wuhan. If we keep this pace, we will need a longer period,” he said.

“Decisions can be revised only every 15 days,” Ricciardi said. “That is the incubation period – and also the lapse in which we can see the effects of our directives.” 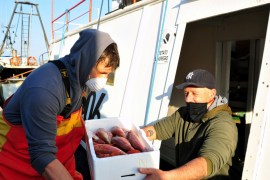 Phase two: Italy considers how to move on after coronavirus peak

Italians will live and work differently when lockdown measures are eased, but the threat of COVID-19 remains. 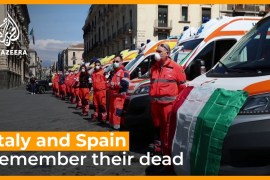 Italy and Spain remember their dead

As Italy and Spain remember the lives lost to coronavirus, communities are pulling together through acts of kindness. 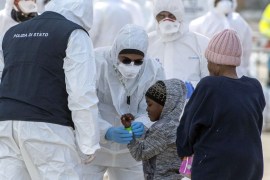 Italy closes ports to refugee ships because of coronavirus

A national emergency blocking ports for refugees and migrants will expire on July 31, but deadline might be extended.