Seoul, South Korea – While much of the world is suspending its local elections and political gatherings to cope with COVID-19, North Korea will push ahead with a massive gathering of delegates later this week.

North Korea’s Supreme People’s Assembly, or SPA for short, is expected to convene on April 10 for the first time since August. The SPA is made of 687 deputies from different North Korean regions who are elected on five-year terms, and usually deliberates new laws and reviews changes to the constitution.

Or, at least, that is what the North Korean state says it does.

“It’s really a kind of cosplay democracy, and it’s vexing and interesting to political scientists around the world,” Peter Ward, a Seoul-based researcher on the North Korean economy and a writer for NK News.

“They dress up, they present themselves as a symbol of unity behind the government and also act as though they have popular support.”

In real-life terms, many South Korean analysts also consider the assembly to be politically useless.

“The Supreme People’s Assembly is often called the most powerful organ in the North Korean government, but that’s not the reality. It doesn’t mean much,” said Jo Dong-joon,a professor of political science and international relations at Seoul National University. “It’s only an institution that justifies whatever Kim Jong Un decides.”

Even so, those who research North Korea will be paying close attention to the April 10 meeting, which might reveal key indicators about North Korea’s plans and how it is coping under the stress of a global pandemic and looming economic downturn.

With diplomatic talks between Pyongyang and Washington stalled since US President Donald Trumpwalked out of the Hanoi summitlast year, North Korea’s priorities have been both mysterious and unclear. Short-range ballistic missiles are routinely tested and launched, all while Kim Jong Un pens letters full of best wishes to the South Korean president.

Even more perplexing, North Korea claims to have zero cases of COVID-19, despite more than 1.5 million confirmed cases worldwide and at least 88,000 deaths. The South, meanwhile has had at least 10,384 confirmed cases and 200 casualties.

“There are several superficial but highly interesting aspects [of the SPA gathering] that we’ll be paying attention to,” said C Harrison Kim, a professor at the University of Hawaii at Manoa and author of Heroes and Toilers,a book on life in postwar North Korea.

“We will have to see how the coronavirus pandemic forces North Korea to change its rituals. There are probably going to be fewer people there, and they might cut down on these public group ceremonies in general.”

In his speech at last year’s Supreme People’s Assembly, Kim Jong Un emphasised the need to “channel all of the nation’s energy into building the economy”. According to Ward, it is unclear whether the North Korean leader will make another speech at the upcoming meeting, but he said he would be looking out for mentions of coronavirus or nuclear talks.

“I think this pandemic has largely frozen the diplomatic situation [with North Korea],” he said. “The United States and much of the world has turned inwards because of the public health and economic crisis, which means that discussions of denuclearisation or relaxation of sanctions are not a priority for now.”

Message in a missile

With so little dialogue happening between North Korea, the US and South Korea, experts are only left to speculate as to why North Korea has resorted, once again, to missile launches.

“This kind of military action is extremely inappropriate, particularly at a time when the entire world is undergoing difficulties of the coronavirus outbreak,” the South Korean Joint Chiefs of Staffsaid in responseto the March 29 launch, urging Pyongyang to stop such tests.

This kind of short-range missile testing was halted during the peak of diplomacy between the US, North Korea and South Korea, which started with the Pyeongchang Winter Olympics back in February 2018. Now, some experts believe Kim Jong Un is simply trying to boost his arsenal while causing low-level provocations that are largely inconsequential. After all, North Korea has still refrained from conducting long-range intercontinental ballistic missile launches, which tend to provoke a more severe reaction.

“I think they have a long-term plan with this,” Ward said. “If you do these [short-range] launches often enough, they can become normal. So North Korea can test the technology and see if it works without consequence, and also it’s an advertisement for other countries that might want to buy its weapons.”

“North Korea is fundamentally a country that relies on nuclear weapons, and has already reached the capability of being able to launch nuclear warheads,” Jo said. “But the country is still developing lower-level weapons to deal with its security concerns.”

While experts are interested in monitoring the Supreme People’s Assembly for hints on how North Korea is coping with COVID-19, others are beginning to question whether North Korea is planning a request for international aid or some form of temporary sanctions relief.

Jo believes that North Korea, which often follows a mantra of self-reliance, “will not ask Seoul for help unless the internal situation with COVID-19 is terribly difficult”.

Nevertheless, Kim noted that there is growing concern among humanitarian groups that North Korea will not be able to cope with a COVID-19 outbreak under the pressure of already-existing UN sanctions

While humanitarian aid and healthcare services are not forbidden under sanctions, the overall struggling economy in combination with a pandemic could create enormous suffering for everyday North Koreans. Reports from defector organisations and watchdog groups suggest that North Koreamay already be battling the virus, despite state claims the country is COVID-19 free.

So far, there have been unconfirmed reports of city lockdowns, test kit shortages, infected military units and at least 23 dead.

“We know now clearly that sanctions affect the health systems of that country, and it certainly is making a major impact on North Korea,” Kim said. “Many groups, organisations and individuals around the world are raising this issue and questioning this issue, and calling for some kind of a rebuke or ending of this kind of global sanctioning system, and NK is one of the countries that people are most concerned about.” 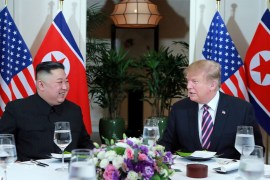 Pyongyang has fired a slew of artillery shells and rockets into the sea recently, a move called ‘very inappropriate’. 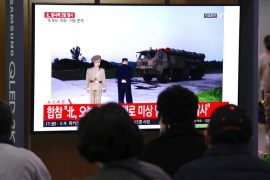 Confidential UN report also says that despite sanctions it is illegally importing petroleum and exporting coal.