Middle Eastern governments must act quickly to limit the spread of the coronavirus as cases in the region have risen to nearly 60,000 – almost double the tally of a week earlier, the World Health Organization (WHO) warned.

“New cases have been reported in some of the most vulnerable countries with fragile health systems,” Ahmed al-Mandhari, WHO’s director for the Eastern Mediterranean region, which includes Pakistan and Afghanistan as well as MENA countries, said on Thursday.

“Even in countries with stronger health systems, we have seen a worrying spike in the numbers of cases and deaths reported,” al-Mandhari said in a statement.

Outside of Iran, which has reported more than 50,000 cases, coronavirus numbers have been relatively low in the Middle East and North Africa compared to Europe, the United States and Asia.

But health officials fear cases of the highly contagious respiratory illness, COVID-19, are under-reported. They say many countries with weak governments and health systems eroded by conflict will struggle to cope.

“I cannot stress enough the urgency of the situation,” said al-Mandhari. “The increasing numbers of cases show that transmission is rapidly occurring at local and community levels.

“We still have a window of opportunity, but this window is slowly closing day by day.”

One of the countries worst affected by conflict is Yemen, where the World Bank said on Thursday it would provide $26.9m in emergency funding to help the WHO and local authorities improve capacity for detecting, containing and treating the coronavirus.

Yemen has not confirmed any coronavirus cases but is seen as especially vulnerable because a five-year civil war has brought its health system to the brink of collapse and has created one of the worst man-made humanitarian disasters in the world.

The country has already been struggling with overlapping infectious diseases including cholera, diphtheria and dengue fever, and large numbers of people have been displaced in the ongoing conflict.

About 24 million of its population of 29 million need humanitarian assistance. There are no doctors in 18 percent of the country’s districts, most healthcare workers have not been paid for at least two years, and COVID-19 testing kits are available for just 600 people, according to the World Bank.

“The epidemic does pose unique public health risks in Yemen … given the already weak health system and the high vulnerability among the population,” said Marina Wes, the bank’s country director.

Meanwhile, the United Nations warned on Friday that health care facilities in war-torn Libya – another vulnerable country ravaged by conflict – were already fragile as the country recorded its first death from the virus.

The UN-recognised, Tripoli-based Government of National Accord (GNA), which controls the west of the country, has officially recorded 10 cases of the virus in Libya.

He called for the release of hundreds of asylum seekers and refugees held by Libyan authorities in detention centres, saying they are “particularly vulnerable and exposed, given often poor sanitation facilities, limited health services and overcrowded conditions”. 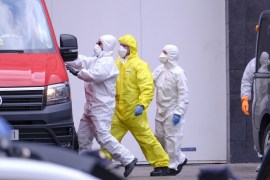 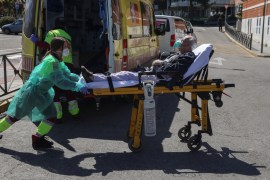 Spain has the world’s second-highest number of fatalities and rising unemployment, but there is hope amid the crisis.