In the United States, Trump administration announced a plan on Tuesday to send money directly to Americans immediately to ease the economic shock of the coronavirus pandemic, as fatalities hit 100 and the number of cases surpassed 5,700.

This comes as West Virginia’s governor announced on Tuesday night the first positive case of coronavirus in the state, meaning all 50 US states now have confirmed cases, raising the alarm across the country.

Governor Jim Justice said the confirmed case was detected in the state’s Eastern Panhandle, an area close to Washington, DC. He did not immediately disclose the county where the illness occurred.

The US government is scrambling to get a grip on the virus that is rapidly spreading through the US and on Tuesday, President Donald Trump told reporters that the economic challenge will be tough in the short term but that the economy will eventually rebound.

Worldwide, the coronavirus has killed more than 7,500 people and infected 184,000 others, according to the World Health Organizations. More than 80,000 have recovered, according to John Hopkins University.

Appearing with Trump, US Treasury Secretary Steven Mnuchin said the Trump administration wants to send cheques to Americans within the next two weeks to help them cope with the virus fallout.

“We’re looking at sending cheques to Americans immediately,” Mnuchin said. “Americans need cash now … and I mean now in the next two weeks.”

Mnuchin also said individuals can defer income tax payments up to $1m and corporations up to $10m for 90 days, interest and penalty-free.

He was adamant that the Trump administration intends to keep markets open through the coronavirus crisis, although shorter trading hours may be needed at some point.

“I want to just be very clear, we intend to keep the markets open,” Mnuchin said.

Pence also said the US Army Corps of Engineers can deploy field hospitals quickly to help handle the influx of virus patients. Trump added that he was looking at sites where they might be needed.

Trump on Monday urged Americans to work diligently for 15 days to try to slow the spread of the virus by avoiding crowds and staying home for the most part.

On Tuesday, he asked Americans not to travel and said he had not ruled out travel restrictions to parts of the country. He said Americans should “enjoy their living room”.

The coronavirus outbreak has forced millions of Americans to hunker down in their homes instead of commuting to work or school. State and local governments have escalated “social-distancing” policies, closing schools, bars, restaurants and theatres in an attempt to contain the virus.

The abrupt slowdown has hit the US airline industry and other economic sectors and has left an increasing number of Americans unemployed.

A report from the US Department of Commerce on Tuesday showed retail sales fell by the most in more than a year in February.

“Disruptions from the coronavirus will bring the economy’s main engine to a halt,” said Lydia Boussour, a senior US economist at Oxford Economics in New York. “As the virus keeps consumers at home and panic spreads, discretionary spending and ‘social consumption’ will take a significant hit.” 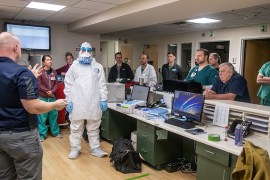 US coronavirus death toll surpasses 100, with case in every state

West Virginia reports first coronavirus case, meaning all 50 US states have now been hit by the virus. 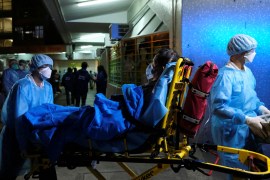 On the front lines as authorities around the globe scramble to prevent the spread of the contagion. 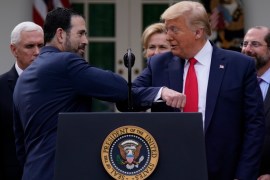 Analysis: US presidential politics in the time of coronavirus

A day after he addressed the nation in a more somber tone that many Americans welcomed, Trump was back to being Trump.