Yemen is at a crossroads, the United Nations’ envoy to the war-torn country has said, as tens of thousands of people flee the northern province of Al-Jawf after fierce clashes.

Yemen’s Houthi rebels seized provincial capital Al-Hazm earlier this month after heavy fighting with government troops, ending a relative lull in the violence that had raised hopes for a more permanent de-escalation.

“Yemen is, in my view, at a critical juncture: we will either silence the guns and resume the political process, or we will slip back into large-scale conflict,” Martin Griffiths said during a visit to Marib province.

“Fighting needs to stop now. Military adventurism and the quest for territorial gains are futile,” he told reporters, according to a transcript provided by his office.

“They will only drag Yemen to many more years of conflict.”

The latest clashes in northern Yemen came after a months-long relative lull in the violence as the warring parties showed an apparent interest in de-escalation.

But efforts to resume a political process appear to be unravelling.

The International Committee of the Red Cross (ICRC) said the fighting between the warring parties in Al-Jawf has displaced tens of thousands of people to Marib province.

“The ICRC and the Yemen Red Crescent Society have helped around 70,000 people, or 10,000 families, by providing food, tents, blankets, jerrycans, basins and hygiene kits,” the agency said in a statement on Saturday.

“In Al-Jawf governorate, increased clashes have hampered efforts to help patients and those in need.”

The loss of the strategic city of Al-Hazm means the rebels now threaten oil-rich Marib.

Al-Jawf has been mostly controlled by the Houthis, but its capital – only 150 kilometres (90 miles) south of the border with Saudi Arabia – had been in the hands of the government.

Yemen’s internationally recognised government has been battling the Houthi rebels since 2014 when they captured the capital Sanaa and swathes of the impoverished Arab nation.

Since the Saudi-led coalition intervened in March 2015, tens of thousands of people, mostly civilians, have been killed and millions displaced, in what the UN has termed the world’s worst humanitarian crisis. 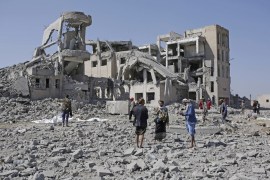 Yemen: US to stop aid in Houthi areas if rebels do not cooperate

US aid agency said the suspension will start in late March if Houthi rebels do not stop blocking aid programmes. 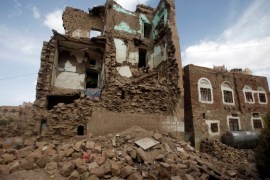 Attacks in al-Jawf come after a Saudi fighter jet crashed in the same area, with Houthis claiming to have shot it down.