Tropical Cyclone Esther, she that has come from the Gulf of Carpentaria, swung through Northern Territory and Western Australia and out to the Kimberley coast, is now swinging back.

Having made landfall on February 23 near the town of Borrololla, her main contribution to the residents and farms of northwest Australia has been copious amounts of rain.

Now as ex-tropical Cyclone Esther is into her second week of life overland. It is a remarkable feat for a cyclone to remain identifiable as a tropical feature while centred over land. However, the feed of moisture into this storm from the Timor Sea is good so the rain keeps falling.

Esther, now a tropical depression, crossed the border back into Northern Territory early on March 3, after doing a four-day loop over the Kimberley region of Western Australia. Bureau of Meteorology forecaster Angus Moore said the high amount of rainfall across the region was due to the unusual “slow-moving loop” taken by ex-Esther.

While the immediate threat of severe weather in Kimberley has passed as ex-Esther makes her way towards the Red Centre, there are still flood warnings in place across the Kimberley. The Department of Fire and Emergency Services said that The Gibb River Road, the main route that traverses the region, is closed to all vehicles, and the Great Northern Highway is also closed in part.

All the extra rainfall from Esther has also been topping up Lake Argyle, which is currently sitting at its lowest level in 25 years. Lake Argyle is at 43 percent capacity, but when full it holds nearly 20 times the volume of Sydney Harbour. Now, after 200 to 300mm of rain has fallen over the Ord River catchment, the lake is expected to rise a metre or two over the coming days.

By coincidence, ex-Esther is about to be subsumed into a trough full of moisture that runs north-south across Australia. This will produce significant rain over the next three days, 100mm to 250mm, in a streak that crosses, Northern Territory, South Australia, Queensland, New South Wales, Australian Capital Territory, Victoria and Tasmania.

That would make Esther a remarkable cyclone, having travelled over every Australian state as an identifiable tropical feature. 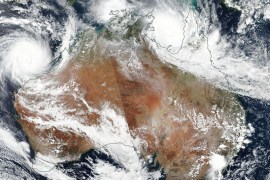 Red alert issued as the storm crawls into the Pilbara coast with damaging winds, large storm surge and flooding rains. 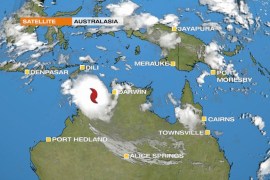