New Delhi, India – Saddar-Ud-Din had been waiting for his son’s body at the Guru Teg Bahadur (GTB) Hospital since Monday evening. His 32-year-old son Mohammad Furqan was killed by Hindu mob in the Kardam Puri area of northeast New Delhi.

He was among dozens of people who waited on Wednesday outside the mortuary at the GTB hospital to receive the bodies of their relatives.

The death toll on Thursday climbed to 34 in the worst religious violence to have hit India’s capital in decades, with the police, in many instances, accused of siding with Hindus and against Muslims.

Around 3:15pm on Wednesday, Furqan’s body, wrapped in shrouds, was brought out on a stretcher and handed to his family.

“Furqan died on Monday and since then we were waiting for his body,” 64-year-old Din told Al Jazeera.

Din alleged that his son, who worked in the family handcrafts business in Kardam Puri, was shot in his leg and abdomen by Hindu rioters around 4pm on Monday, barely 150 metres from his home.

Furqan, a father of two, had gone out to fetch food items for his children when he was shot by a mob amid chants of “Jai Shri Ram” or Hail Lord Ram, his family said.

Din said witnesses told him that Furqan fell down after being shot, and then the mob beat him with sticks.

“He lay on the road for nearly half an hour before he could be rushed to the hospital in an auto-rickshaw. That led to huge blood loss and ultimately to his death,” he said.

Din, who also lives in the mixed, working-class Kardam Puri neighbourhood, told Al Jazeera that the violence unfolding in the capital reminded him of the 1984 anti-Sikh pogrom, in which more than 3,000 members of the minority Sikh community were killed.

“Hindus and Muslims have been living in harmony for decades in the area. I’ve not seen such a situation in decades. This is like 1984 when Sikhs were massacred. Today it’s the Muslims,” he said.

Thousands of people have been demonstrating for weeks over a controversial new citizenship legislation, passed by President Narendra Modi’s Hindu nationalist government, which makes it easier for non-Muslims – but not Muslims – from neighbouring countries to get Indian citizenship.

The violence erupted on Sunday after groups of Hindus attacked peaceful sit-ins organised by Muslims against the citizenship law, or Citizenship Amendment Act (CAA).

Critics say the legislation passed last December is against the secular ethos of the officially secular nation of 1.3 billion people.

Leaders from Modi’s Bharatiya Janata Party (BJP), however, have vilified protesters, calling them “anti-nationals” and “traitors”.

The violence was triggered a day after BJP leader Kapil Mishra warned Muslims to end their sit-ins in Maujpur near Jaffrabad metro station or face his supporters’ wrath.

“Three days’ ultimatum for Delhi Police – clear the roads in Jaffrabad and Chand Bagh. After this, we won’t listen to you,” he declared in a video posted on his Twitter account.

Modi, criticised for not acting promptly, broke his silence and called for calm on Wednesday. He had hosted US President Donald Trump in the capital on Monday – the day of the worst violence.

Modi was the Chief Minister of the western state of Gujarat where more than 1,000 people, mostly Muslims, were killed, in 2002.

Delhi’s city government, led by Chief Minister Arvind Kejriwal, called for the army to be deployed following reports that police looked the other way as Muslims’ houses, shops and mosques were set ablaze.

There were no reports of violence on Thursday but local media reported that many people left the violence-affected areas on Wednesday.

Videos shared on social media showed police taunting and abusing injured Muslims, and in some cases, police were seen smashing a CCTV camera in a violence-affected area.

India’s Supreme Court and the Delhi High Court on Wednesday expressed disappointment over the actions of Delhi Police. The High Court criticised a delay in the registration of a police complaint against Mishra for hate speech.

Late that evening, Justice Murlidhar was transferred from the Delhi High Court to the northern Punjab state.

Abdul Samad, 21, was attending evening prayers on Tuesday when a Hindu mob, carrying stones and sticks, attacked his mosque in the Mustafabad area.

“They set the mosque on fire, entered the prayer hall and desecrated it. People who were praying inside were beaten very badly,” Samad told Al Jazeera at GTB Hospital.

Samad who had multiple injuries including to his left eye, was taken to Al Hind Hospital in Mustafabad and later referred to GTB Hospital.

“We have been peacefully protesting against the CAA in the Mustafabad area for last 70 days. No violence took place,” he told Al Jazeera.

“The violence began only after Kapil Misra led the pro-CAA rally in the area and made provocative statements,” he said, adding that the rioters seemed to have come from outside. “They were not local Hindus,” he claimed.

Rahul Solanki, 26, who worked in a marketing company, was shot in the neck on Monday evening as he left his home to go shopping, his younger brother told Al Jazeera outside the GTB Hospital mortuary, where the family was waiting for his body.

“My brother was killed by a Muslim mob when he went out to buy milk,” said Rohit Solanki, 24.

“The situation in the area was tense since Monday afternoon. My father called several police officials since 2pm to visit the area as the situation might turn communal but they didn’t respond,” he alleged. “Had police come on time, my brother would have been alive today.”

Solanki said that he has been living in Mustafabad, a Muslim-dominated area, all his life and also said he had never experienced any animosity between the Hindu and Muslim communities.

“I’ve never seen any problem between Hindus and Muslims in our area. We always lived in communal harmony but I can tell you with guarantee that the rioters were not local Muslims. They were outsiders,” Solanki said.

On Wednesday, as Rahul’s body was brought out on the stretcher from the mortuary, four of his friends in their 20s, including two women, broke down. They were inconsolable.

One, Mohammad Shahbaz Alam, cried and hugged his friend, Vikas, over the loss of Solanki.

“We were not just colleagues. We all were a family,” Alam told Al Jazeera.

“In this Hindu-Muslim politics, we both lost a brother in Rahul [Solanki],” said Vikas, as tears rolled down his face. 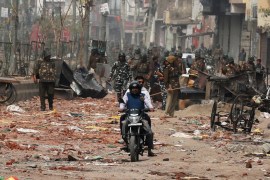 At least 25 people have been killed and hundreds wounded in violence across the India capital. 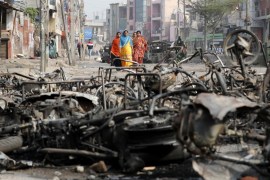 Indian capital hit by violence: All the latest updates

Death toll in worst violence in decades in Delhi rises to 37 as opposition slams government for being ‘mute spectator’. 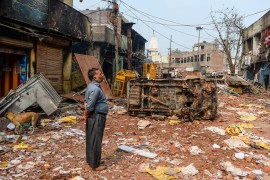 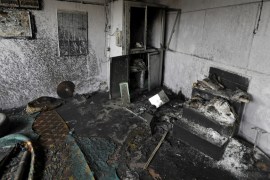 Can religious violence in India be contained?