Manila, Philippines – The repatriation of 445 Filipino crew members from the Diamond Princess cruise ship docked in Japan was completed on Wednesday morning, ending more than three weeks of agony for almost half the staff on board the coronavirus-stricken ship, even as hundreds of workers from other countries were left behind.

The Filipino crew members, accompanied by government officials, arrived on two chartered flights and landed at the Clark Air Base about 65 kilometres (40 miles) northwest of the capital, Manila.

The crew will begin a 14-day quarantine period at a sports complex outside Manila, under the close monitoring of healthcare workers. The flight crew and government officials who were part of the repatriation team will also undergo the same procedure.

A total of 80 Filipino crew members were infected with the coronavirus and left behind in Japan to finish their treatment.

The World Health Organization (WHO) reported 634 infections and two deaths among those on board the luxury liner, representing one of the largest concentrations of COVID-19 cases outside China.

An estimated 2,670 passengers and 1,100 crew members were forced into quarantine beginning on February 3, after it was discovered that a passenger who had disembarked more than a week before had tested positive for the coronavirus.

All the passengers were allowed off the ship last week, leaving the workers behind.

The crew, comprised mostly of Filipinos, Indians and Indonesian nationals, worked tirelessly to make passengers comfortable while they were confined in their cabins.

Throughout the quarantine period, and often with limited protective gear, they cooked and served passengers meals, washed their clothes and carried out requests that passengers posted on their cabin doors.

On Wednesday, the Indian government announced that a chartered flight was heading to Japan to bring back 138 of its nationals working on the ship. Some 14 others who were infected will continue their treatment in Japanese hospitals.

For weeks, some of the crew members have been posting videos online begging their governments to rescue them.

Meanwhile, 69 Indonesian crew members are still waiting for a response from their government.

In a video released on Monday, the Indonesian staff were seen pleading with President Joko Widodo to evacuate them from the ship saying that they were “being killed slowly.”

But the Jakarta Post reported on Wednesday that the government was in “apparently no rush” to evacuate their nationals, fearing that they could spread the virus when they return home.

The delay in the repatriation compounded the fear among the crew and their family members, who were waiting to be reunited with their loved ones.

A Filipino woman, whose husband worked in the ship’s housekeeping department, told Al Jazeera that his job meant coming into contact with the garments, bedsheets and towels used by passengers who may have been infected. In the days immediately following the announcement of the quarantine period, the crew did not have either gloves or masks.

Other reports said that the quarantine was loosely enforced, with passengers freely roaming about the ship and mixing with other guests during buffet meals.

Another crew member with the housekeeping department, who spoke to Al Jazeera on the condition of anonymity, said his roommate had already been infected with the coronavirus.

Sharing cramped quarters with his infected roommate, handling the personal belongings of guests who may have been infected, as well as the emotional strain and physical fatigue brought on by long shifts made him worried if it was just a matter of time before he was also infected.

“There was clearly a difference in the way that the passengers and crew were protected from the virus,” said Arman Hernando, vice chairperson of the Philippine labour rights group, Migrante International.

“The crew worked double shifts, often without adequate protection, in a place where the virus was spreading. They were exposed and put at higher risk for infection.”

Family members and crew who spoke to Al Jazeera preferred not to reveal their identity for fear of being fired or losing future job opportunities.

The Japanese government has faced intense criticism for its decision to hold passengers on board the ship in a measure that was supposed to contain the spread of the virus.

Kentaro Iwata, an infectious diseases specialist at the Kobe University visited the Diamond Princess and in a YouTube video described the setup on the ship as “total chaos”.

Several Facebook pages have also appeared in which crew members and their families openly expressed their nervousness as bureaucracy and government protocols stood in the way of their return home.

“It was a mistake to insist on keeping all the crew on board when it was only necessary to have a safe manning group onboard,” said Francesco di Fiore, the inspectorate coordinator at the International Transport Workers’ Federation (ITF) in Italy, said in a statement.

Labour rights experts said the crew had a right to mount a strike and refuse to work in an environment that exposed them to health risks.

But that would mean going up against cruise liner giant Princess Cruises and its local recruitment firm, Magsaysay Maritime Corporation, one of the largest manning agencies in the Philippines.

“You can’t blame the crew. Their immediate concern is keeping their jobs. They have no choice, there are no jobs here in the Philippines,” said Edwin dela Cruz, president of the International Seafarers’ Action Center, an advocacy group for seafarer rights.

In 2018, seafarer remittances totalled $6.1bn. About 10 percent of the Philippines’ GDP is bolstered by remittances sent home by Filipinos working overseas.

‘Exploited for their desperation’

The Philippines is the largest supplier of seafarers in the world but according to dela Cruz, the surplus of manpower for support roles on ships makes the shipping industry a buyer’s market.

“There are over 700,000 qualified seafarers but at any given time, there are only 400,000 shipping jobs that can be filled,” dela Cruz said.

“Each time a seafarer sets sail, they serve a contract for a few months. Then they have to apply for another job, another contract. They have no security of tenure. They are forever contractual,” said dela Cruz.

“The crew was exploited for their desperation and their poverty,” he added.

The uncertainty was palpable at a briefing on Saturday with family members, who mostly wanted to be assured that crew members would be paid during the quarantine period, and that they would be considered for employment again after they recovered from the infection.

‘We want our loved ones home’

In a video message, a Princess Cruises executive assured family members that the crew would be given two months’ paid leave and that all their medical expenses would be covered.

One wife of a crew member noted high-ranking officials from the Labour Department were not present at the briefing.

One labour representative told families they would receive financial assistance when they got home. But it was unclear how much they would be given or if it would be additional to the standard assistance that the government offered to migrant workers.

The labour official added that they would also offer scholarships to children of migrant workers.

“Scholarships?” asked the crew member’s wife, incredulous. “We don’t want to hear about scholarships. We want to know what will happen to our loved ones if they become sick or can no longer work because of their prolonged stay on that virus-infected ship.”

Another woman said that she got into an argument with her husband who is a waiter on Princess Cruises.

“He said that he and some of the other crew were willing to stay on the ship as long as they needed to.”

She shot back, annoyed and exasperated. “You think you’re a soldier or something? You trying to be a hero?”

The passengers of the Diamond Princess certainly thought so.

As the passengers left the ship, the requests and orders they had tacked on the cabin doors of the workers were replaced with notes of gratitude.

“Thank you to all you amazing crew. We are all so so grateful.” 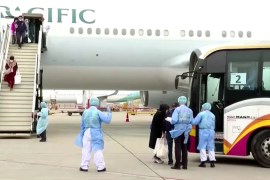 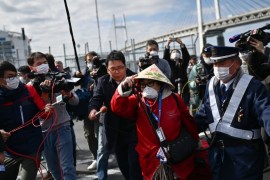 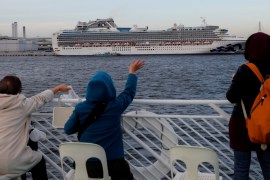