Idlib province, Syria – As soon as he heard reports that Syrian government forces were moving towards his home city of Saraqib, Muadh al-Ahmad decided to flee.

“We knew what was coming. Families did not want to be buried under the rubble of their own homes so we got up and left,” the 34-year-old told Al Jazeera.

According to al-Ahmad, the city in northwestern Syria quickly turned into a “ghost town” in the few days that preceded Syrian government forces’ attack on the city, backed by Russian and Syrian fighter jets.

“We left in an endless stream of trucks and cars moving towards the unknown,” said al-Ahmad. “I can’t imagine the day of judgement being any different,” he said.

“Russian and Syrian warplanes were in the skies, targeting anything that moved, even the people leaving their homes,” he added.

He now lives with his young family in Atma camp, one of the many camps for displaced people along the Turkey-Syria border. He told Al Jazeera that the biggest struggle was the harsh weather conditions, with the winter temperatures falling below zero.

“We’re exposed to freezing temperatures without even a heater or fuel to keep us warm. In most places, humanitarian aid and NGOs are nowhere to be found.”

According to the United Nations, air and ground attacks displaced approximately 100,000 people from their homes in the last week. Some 700,000 people have fled from northwestern Syria since December, when the Syrian government launched its latest offensive on the region as Syrian President Bashar al-Assad tries to regain control of the whole of the country. The UN has described the displacement as one of the worst humanitarian crises in Syria’s nearly nine-year-long war.

The mass flight comes amid clashes between Syrian government forces and Turkish-backed rebels that have spiralled in recent days into a near all-out conflict.

Much of the fighting in recent days has focused on rebel-held towns and villages around the strategic M5 highway.

Ahmad al-Khader, who was displaced from his home in Maaret al-Numaan in January, said fleeing was a “painful and humiliating experience”.

Without a car of their own, he and his wife Souad, 59, had to spend “every last penny” to pay a truck driver who transported them along with hundreds of others to the nearest safe area in the northern suburbs of Aleppo, he told Al Jazeera.

When the couple reached the camps for internally displaced people (IDP) along the borders, they said there were no tents to take them in.

“We live in a cold and humid abandoned shop,” said the 68-year-old, who complained of having to live off of donations. “We have to accept charity to stay alive,” he added.

Like other IDPs Al Jazeera spoke to, al-Khader complained of the cold weather which has taken over the region, saying that charities were unable to provide heaters or warm clothes.

“With no heating facilities nor fuel, our elderly bodies are exposed to extremely low temperatures at night. I’m not sure we can take it for much longer,” he told Al Jazeera.

The war has scattered al-Khader’s family across northwest Syria.

“After my three children and their families were pushed to separate corners of north Syria, I didn’t imagine anything could be worse.

“But seeing my home and all that I owned levelled to the ground was simply heartbreaking,” said Souad as she recounted how Russian and Syrian government warplanes targeted her neighbourhood.

“Within minutes, it was all gone. We didn’t have anything to take with us,” she added.

Humanitarian aid organisations have complained that the deteriorating conditions since the start of the month have left them scrambling to cope with the thousands of people moving into IDP camps along the Turkish borders.

Omar Hussein, 29, who was displaced from his home in Atarib in the western countryside of Aleppo, was unable to find shelter for his wife and two children at IDP camps along the Turkish borders.

“When we finally got to Idlib’s western suburbs, the situation along the borders was even more devastating, than what we left behind,” Hussein told Al Jazeera.

“Within hours, whole neighbourhoods had been cleared and thousands of people were pushed out of onto the streets in sub-zero temperatures,” he said.

“By the time we reached the camps, they were overflowing with displaced people,” he said. “We couldn’t find a single tent to spend the night,” he added.

However, unlike others, who were left without shelter, Hussein said a local family took him in.

“If it wasn’t for these good people, my wife and young children would have been left to freeze on the street,” he said.

“But we’re some of the lucky ones. Thousands of others have no shelter,” he said. “Why can’t the world hear us cry?” 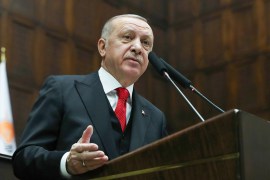 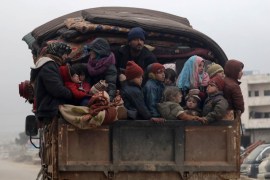 In Pictures: Syrians flee for safety as battle in northwest rages

More people have fled fighting in Syria over past 10 weeks than at any other time in the nine-year-old conflict. 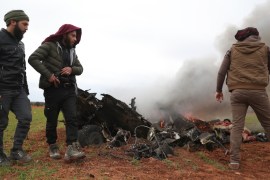 Fresh clashes in Syria’s Idlib as rebels down helicopter

Turkey-backed rebels shoot down a Syrian army helicopter amid government offensive on Idlib. 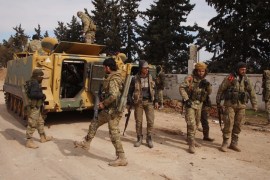