Tens of thousands of Iranians have poured into the streets of Tehran and other cities to commemorate the 41st anniversary of the Islamic revolution, against a backdrop of escalating tensions with the United States.

Waving flags of Iran and holding portraits of the founder of the Islamic republic, the late Ayatollah Ruhollah Khomeini, they converged on Tehran’s Azadi Square on Tuesday despite chilly temperatures.

“Death to America” and “We will resist until the end”, read some of the banners carried by those in the crowd.

Speaking at the rally, Iran’s President Hassan Rouhani said the US finds it “unbearable” that the Islamic revolution remains in place 41 years after bringing down US ally the shah.

“It is unbearable for the United States to accept the victory of a great nation and that a superpower has been driven out of this land,” Rouhani said

“It is natural for them to have dreamt, for 41 years, of returning to this land, because they know that we are one of the most powerful countries” in the Middle East, he added.

The celebrations mark the day that Shia leader Khomeini returned from exile and overthrew the shah’s last government.

The state has appealed for a strong turnout as a show of solidarity after a year in which Iran has been shaken by protests and military tensions with the US.

“Securing our country and our region depends on our unity, and participation in this rally is a symbol of this unity,” Hadi Khamenei, the brother of Iran’s supreme leader Ayatollah Ali Khamenei, said on state television.

Iran’s economy has been battered since US President Donald Trump in 2018 abandoned an international nuclear deal and reimposed sanctions and a stated campaign of “maximum pressure”.

When Iran raised petrol prices in November, nationwide protests erupted and turned violent before security forces put them down amid a near-total internet blackout.

Tensions with Washington escalated in early January when a US drone strike killed powerful Iranian General Qassem Soleimani in Baghdad.

Iran retaliated by targeting US forces but then accidentally shot down a Ukrainian airliner, killing all 176 people on board, in a tragedy that sparked anger at home and abroad.

This year’s anniversary also comes ahead of crucial parliamentary elections in Iran.

The alliance of moderates and reformers that propelled Rouhani to power in 2013 is scrambling to avoid losing its majority in the February 21 election.

Rouhani’s government has come under intense pressure from conservatives for agreeing to the 2015 nuclear deal that has unravelled since Trump’s decision to withdraw from it and reimpose crippling sanctions. 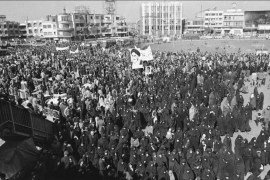 Iran’s referendum and the transformation to the Islamic Republic 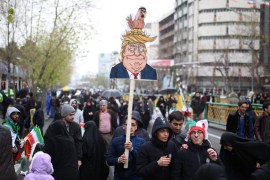