Taipei, Taiwan – In skinny jeans and chilly pepper red sneakers matching her lipstick, Kao Chia-yu was greeted like a film celebrity by her constituents.

Shouts of “Congratulations!” echoed through the narrow streets, and fans chased her down for selfies and autographs. Instinctually darting between Putonghua and Taiwanese, Kao, 39, was on her last thank-the-voters victory lap on the Lunar New Year break.

On Saturday, the three-term local councillor will be sworn in as a legislator. Kao and other women legislators take up 42 percent of the seats in Taiwan‘s Legislative Yuan, making it the most equitable in Asia.

Kao won in last month’s general election, in which the sitting – and first female – president Tsai Ing-wen scored a second term on a historical high vote of 57 percent.

Now boasting a twice-elected female president, and a female vice president as early as in 2000, Taiwan seems to have arrived as a democracy where women have as much a fair shot as men at any political office.

What has paved the way to ensuring this is a long history of gender quotas for most races, except single-seat contests such as presidential and mayoral races.

More tellingly, in Chinese the quotas are called “female safety net”, requiring that women get at least half of the “at-large” seats in the legislature and one out of every four seats in local council elections.

And women in the Republic of China, as Taiwan is formally known, have been fighting for a seat at the table for nearly a century.

As early as in the 1920s, they fought to send a delegation to the fledgeling republic’s national assembly.

Freshly freed from foot-binding Qing Dynasty, Chinese women at the times were influenced by the suffrage movement in the United States and the feminist movements across the world.

Eventually, the gender quota was codified, albeit not specified, in the 1946 constitution.

When the Nationalists lost the civil war to the Communists in 1949, they relocated the capital to Taipei and suspended parts of the constitution during martial law (1949-87).

But the quota mandate was not only observed, but progressively strengthened, thanks to advocacy from women’s rights groups such as the Awakening Foundation, which was established in 1982.

By 2000, the constitution was amended to raise the proportion of reserved seats in the Legislative Yuan for women to a quarter.

The quota has not seen much backlash as it was never invoked to install a woman in office by supplanting a man who garnered more votes. That is because the parties have the incentive to field strong female candidates to pre-empt just that outcome.

The women at Taiwan’s upper echelon, past and present, run the gamut.

Annette Lu, the 2000 vice president, is a Harvard-educated political activist, whereas Tsai is a professor turned politician.

The common denominator of these top women is that none hails from a ruling family, as has been the case with nearly all female leaders in other Asian countries, notably Aung San Suu Kyi in Myanmar, Indira Gandhi in India and Corazon Aquino and Gloria Arroyo in the Philippines.

Political scientist Nathan Batto at Academia Sinica observed that quotas installed at the lower rungs of power have been particularly conducive to grooming female candidates.

“Inevitably you’ll see more women going up the level graduating into higher levels of office after they’ve grown their power base.”

This rang true to Kao’s experience. The former TV host was first tapped by the then-opposition Democratic Progressive Party to be a candidate for the legislature in 2008, only to be replaced by an older male. She then forged her own political path from the ground up.

“To work at the grassroots level for the past decade was a tremendous experience. I’ve been able to build a solid base especially since there’s significant overlap between the constituencies,” said Kao.

Recent research also shows that women who won the reserved seats match their male counterparts in political experience and education achievement, and in some cases even beat them.

“Women these days perform better than men and are getting recognition,” Kao added. “Times have changed. I think the quota has served out its usefulness of encouraging women to run. It isn’t needed any longer.”

To many women, the barrier to running now lies more in the onslaught of sexism against first-time candidates. During her first term, even Tsai faced the put-down: “Those who wear skirts can’t be the commander-in-chief.”

When Sherry Chou, 29, a feminist who was recruited to run in 2016 for a legislative seat, she pushed for decriminalisation of extramarital affairs. Her Facebook page saw comments saying she wanted to be someone’s mistress.

Chou believes schools need to do a better job teaching gender equality. Until then, she hopes everyone can learn from real-life examples at the top of the ladder.

“Little girls in Taiwan can see they can grow up not just to be the princess waiting for the white knight, but then they can also be the empress,” Chou said. 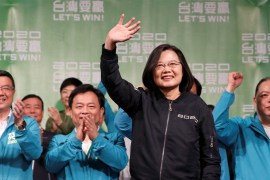 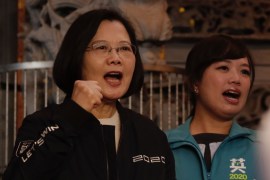 Tsai Ing-wen, who is seeking re-election in a January 11 vote, promises to safeguard island’s freedom and democracy. 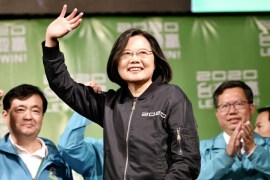