Refocusing a debate on President Donald Trump‘s moves in the Middle East in the midst of the Senate impeachment trial, the Democratic-controlled House on Thursday approved measures reasserting congressional authority over war powers.

The House passed a proposal to repeal the 2002 congressional authorisation for the war in Iraq, as well as a plan to prevent tax dollars from being used to take military action against Iran without congressional approval. Repeal of the 2002 authorisation was approved by a 236-166 vote, while the funding measure on Iran passed 228-175.

The actions follow a January 9 vote by the House asserting that President Trump must seek approval from Congress before engaging in further military action against Iran.

Democrats said the three measures, taken together, would reassert Congress’s constitutional authority in questions of war and peace and sending American forces into harm’s way.

“For far too long, Congress has been missing in action on matters of war and peace,” said Democratic Representative Barbara Lee, who sponsored the measure repealing 2002 war authorisation.

She called the repeal vote long overdue. “It is time to end giving blank checks to any president to wage endless wars,” she said.

Noting that presidents from both parties have used the “outdated” 2002 resolution to justify military action in a host of countries, Lee said leaving the resolution in place “is not only dangerous but irresponsible”.

Republicans said Lee and fellow Democrats were the ones acting irresponsibly.

“After President Trump took decisive action to take out a brutal Iranian terrorist responsible for the deaths of hundreds of Americans, Democrats now seek to restrain our president and restrict his ability to protect our nation,” said Representative Steve Scalise, the number 2 House Republican.

The Democrats’ bills “do not offer solutions” to concerns about war authorisation, “only constraints that embolden Iran”, Scalise said.

Khanna said the measure does not prevent the president from acting to defend US interests, but said Congress must authorise spending US resources on any military action.

“It’s high time Congress reasserted our power of the purse and made clear to any president that they must come to us first before taking any offensive military action. War should always be a last resort,” Khanna said.

The House approved a nonbinding resolution January 9 asserting that Trump must seek approval from Congress before engaging in further military action against Iran. The vote followed a January 3 US drone strike that killed top Iranian commander Qassem Soleimani in Iraq.

Democrats and several Republicans called Trump administration briefings on the attack inadequate, adding that officials did not provide enough details about why the attack was justified.

The Senate has not acted on the proposal by Democratic Senator Tim Kaine asserting that Trump must seek approval from Congress before engaging in further military action against Iran. Kaine said earlier this month that he has at least 51 votes to support the bipartisan resolution. 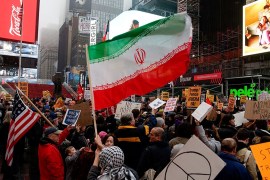 Amid US-Iran tensions, many Iranian Americans fear they will face increased discrimination. Some already have. 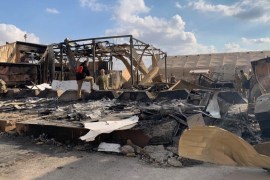 Iraq: In the shadow of US-Iran tensions

Talk to Al Jazeera travels to Baghdad to find out if an Iranian attack on US forces in Iraq is imminent.