China failed to send home North Korean workers by a December deadline in violation of United Nations sanctions, a senior US official said on Wednesday, adding that this was why Washington had blacklisted two entities involved in Pyongyang’s labour export.

A 2017 UN Security Council resolution, which China backed, demanded that all countries repatriate all North Korean workers by December 22 to stop them earning foreign currency for North Korea’s nuclear and ballistic missile programmes.

North Korean workers were also previously employed in Qatar for the World Cup in 2022, as well as in Kuwait, according to a previous Reuters report. Both countries stopped renewing visas for those workers in compliance with the UN sanctions.

“Many – most … have actually taken this to heart and moved them,” a senior State Department official told reporters, referring to the repatriation requirement.

“But we know one particular country has the large majority of North Korean guest workers and has not taken action, hence the steps we had to take in terms of sanctions.”

In response to questions, the official confirmed he was referring to China.

China’s embassy in Washington did not immediately respond to a request for comment.

Countries were required to submit a midterm report to the UN Security Council North Korea sanctions committee early last year on compliance with the 2017 resolution, and are now due to submit a final report in late March on how many North Korean workers they have repatriated.

According to Russia’s midterm report, it sent home nearly two-thirds of some 30,000 North Koreans working there during 2018, while Beijing said it had repatriated more than half but did not specify a figure.

“China will continue earnestly implementing its international obligations, carry out the repatriation work in an orderly manner and complete the repatriation on time,” China’s UN mission said at the time.

The US State Department official also said Washington still hoped North Korea would engage in negotiations over its nuclear programme, regardless of the apparent change in its foreign minister.

Last week, North Korea told countries with embassies in Pyongyang that Ri Son Gwon, a senior military officer and official of the ruling Workers’ Party had been appointed foreign minister.

Asked whether this was the case, the US official said: “Apparently, yes.”

“I don’t have a lot of data on who he is, or what he represents,” he added.

“But the hope is that they’ll understand the importance of having a conversation and talking about these things as we agreed in the original Singapore agreement,” the official said.

“There’s nothing to be gained by not talking. It’s only to their benefit.

North Korea reiterated on Tuesday it was no longer bound by commitments to halt nuclear and missile testing, blaming the US’s failure to meet a year-end deadline for nuclear talks and “brutal and inhumane” US sanctions. 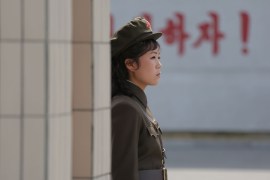 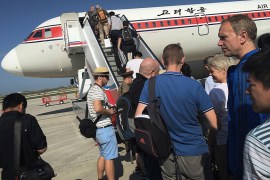 Most visitors to the North are Chinese or visit through the mainland, which first reported the virus in December. 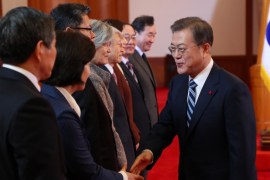