Libya‘s renegade military commander Khalifa Haftar has left Moscow without signing an agreement that would have formalised a tentative ceasefire in the war-wracked country, according to Russia’s foreign ministry.

After hours of negotiations brokered by Russia and Turkey, Haftar on Monday evening asked until Tuesday morning to look over the agreement already signed by Fayez al-Sarraj, the head of the United Nations-recognised Government of National Accord (GNA).

But Haftar, whose eastern-based forces launched an offensive to seize the GNA’s base of Tripoli in April, left Moscow without signing the deal drafted at the indirect talks, Russia’s foreign ministry was quoted as saying by TASS news agency on Tuesday.

“The draft [agreement] ignores many of the Libyan army’s demands,” Haftar was quoted as saying by the Al Arabiya television network.

The talks in the Russian capital were held a day after a fragile ceasefire brokered by Russia and Turkey came into force in Libya.

The negotiations did not include the warring sides meeting face to face, but Russian Foreign Minister Sergey Lavrov said on Monday there was “progress” and that Haftar viewed the ceasefire document “positively”.

On Tuesday, Turkish President Recep Tayyip Erdogan said Ankara would teach Haftar “a lesson” if he resumed his offensive on Tripoli.

“We will not hesitate to teach a lesson to the putchist Haftar if he continues his attacks on the country’s legitimate administration and our brothers in Libya,” Erdogan said during a meeting of his ruling AK Party.

It is unclear where the developments in Moscow leave a peace summit scheduled to take place in Germany’s capital, Berlin, on Sunday.

The conference, part of UN Special Envoy Ghassan Salame’s efforts to bring an end to the conflict, has been postponed several times due to continued fighting along Tripoli’s southern outskirts.

On Tuesday, the eastern-based forces under Haftar’s command posted on their official Facebook page that they were “ready and determined” to achieve victory in their months-long campaign to seize the capital from the GNA.

“The GNA has documented several violations by Haftar’s forces overnight and one pro-government fighter was killed by a sniper, according to a government spokesperson,” Al Jazeera’s Mahmoud Abdelwahed, reporting from Tripoli, said.

“Military sources have stated that they documented deployment, regrouping and repositioning in several axis by Haftar’s forces … building trust between the rival factions is going to be a tough task.”

“The talks are in jeopardy and in fact, the next potential reversal on the ground could be one that sets back Russia and Turkish diplomacy and provide a big opportunity and a test in my view for Turkey’s commitment to defending the government in Tripoli,” Yousef told Al Jazeera.

Yousef said Haftar’s decision to opt out of the ceasefire agreement was puzzling and could be explained in part by the diverging interests of his many backers. Haftar enjoys the backing of several states besides Russia. These include, among others, Egypt, Saudi Arabia and the United Arab Emirates.

“The speculation in Libya and abroad is that given that Haftar is not accountable to anyone in Libya, his external sponsors, other than Russia, have put pressure on him to delay, postpone or try to make gains within the ceasefire agreement.”

The oil-rich country has been marred by instability since a 2011 NATO-backed uprising that toppled longtime leader Muammar Gaddafi.

It has since been split between two rival administrations based in the country’s east and west amid a conflict drawing increasing involvement from foreign powers.

According to the latest UN tally, more than 280 civilians and roughly 2,000 fighters have been killed since Haftar launched his offensive in April. An estimated 146,000 Libyans have been displaced.

Efforts to demobilise and reintegrate fighters that helped topple Gaddafi into the formal security apparatus have largely failed. 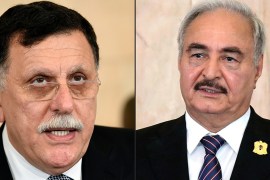 No breakthrough in Moscow talks for Libya ceasefire deal

Commander of eastern-based forces asks to be given until Tuesday to decide whether to sign the deal. 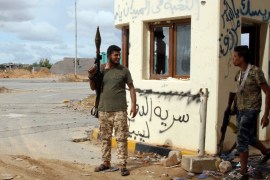 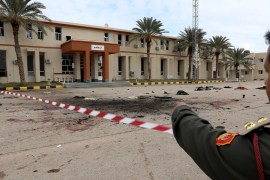 Libya’s rival factions accuse each other of violating ceasefire

LNA and GNA blame each other for breaking truce, aimed to stop more than nine months of clashes around Tripoli.