Iran warned the United Kingdom, France and Germany about “the consequences” of their decision to launch a dispute mechanism against it under the 2015 nuclear deal.

The European nations announced on Tuesday they triggered the dispute mechanism provided for in the landmark nuclear agreement in order to force Iran to honour its commitments under the accord.

“The usage of the dispute mechanism is legally baseless and a strategic mistake from a political standpoint,” Zarif was quoted by the semi-official Fars News Agency as saying.

Analysts say the move may mean the end of the nuclear accord and the reimposition of more sanctions on Tehran.

“Of course, if the Europeans … seek to abuse [this process] they must also be prepared to accept the consequences,” Iran’s foreign ministry said in a statement.

Tehran suggested it had little faith in the declaration by the Europeans that they were determined “to work with all participants to preserve” the historic deal.

“On the contrary, it once again signals to everyone – in particular to the three European state parties to the agreement – that it will respond seriously and firmly to any disloyalty, ill will, or unconstructive action,” the statement added.

The United States unilaterally pulled out of the multilateral nuclear deal in May 2018 and reimposed crippling sanctions on Iran.

Iran has long accused the Europeans of reneging on promises to protect its economy from US sanctions. Foreign ministry spokesman Abbas Mousavi dismissed the “completely passive action” of the three countries and said Iran would support any act of “goodwill and constructive effort” to save the agreement.

Following Washington’s decision to withdraw from the accord, Iran began dropping its commitments under the nuclear deal, formally known as the Joint Comprehensive Plan of Action.

The three European signatories now say they have “no choice” but to trigger the mechanism.

Russia – also a signatory of the agreement – condemned the European Union move to put the Iran nuclear deal in dispute.

“We do not rule out that the thoughtless actions of the Europeans could lead to a new escalation around the Iranian nuclear accord,” the foreign ministry said in a statement.

Ellie Geranmayeh, a senior policy fellow at the European Council on Foreign Relations, said the triggering of the process “set in motion a new phase” with “considerable risk”.

She said the current impasse could only be solved if the Europeans presented Iran with an economic package to offset US sanctions – which so far they have been unable to do to Tehran’s satisfaction.

On the other hand, Iran could respond to this “pressure tactic” by in turn further stepping up its nuclear programme and leaving the Non-Proliferation Treaty, which would be a “major turning point”, Geranmayeh said.

Ali Vaez, project director for Iran for the International Crisis Group, pointed out that China and Russia have already suggested they will not recognise the reimposition of UN sanctions, potentially leading to “deepening fissures over this issue”.

“UN sanction snapback could exhaust whatever leverage Europe retains without producing any gains, and closing the door on Europe’s ability to even mediate tensions between Iran and the US,” he wrote.

Analysts say the UN sanctions that would be reimposed would have little impact on the Iranian economy, already under severe strain from measures the US has taken since May 2018.

However, the issue is symbolically important because the UN sanctions included an arms embargo, which will expire in October 2020.

Iranian President Hassan Rouhani said in November that the lifting of the embargo was a “political and security goal” for Iran.

Conversely, the US and its allies in the region have been keen to maintain the embargo, with US Secretary of State Mike Pompeo branding the October 2020 deadline a “countdown to terror”. 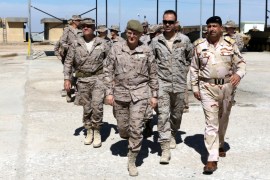 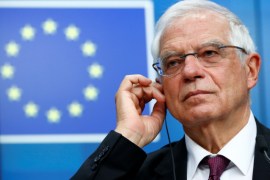 E3 bloc says Iran failing to respect its side of nuclear pact but adds it is not joining US ‘maximum pressure’ campaign.