The Ukrainian airliner that crashed shortly after takeoff from Tehran was shot down by an Iranian missile, officials from Canada, the United States and the United Kingdom believe, a conclusion Iran rejects.

Western officials said the strike may have been a mistake.

The Ukraine International Airlines flight PS752 bound for the Ukrainian capital, Kyiv, crashed minutes after leaving the Imam Khomeini International Airport in Tehran on Wednesday amid escalating tensions between the US and Iran. All 176 people on board were killed.

The crash happened hours after Iran launched missile attacks on US-led forces in Iraq. The strikes, Iran said, were in retaliation for the US assassination of top Iranian commander Qassem Soleimani.

Here are all of the latest updates as of Friday, January 10:

US Treasury Secretary Steven Mnuchin said the department will grant sanction waivers to allow Americans or anyone else to participate in the investigation of Wednesday’s crash of a Ukrainian International Boeing 737-800 airliner in Iran.

Under US sanctions law, the Treasury’s Office of Foreign Assets Control (OFAC) must grant approval for US investigators and Boeing Co to participate and potentially travel to Iran.

Boeing said it was working with the Federal Aviation Administration and National Transportation Safety Board “on the necessary applications and approvals from OFAC for the appropriate export licenses”.

The NTSB said late on Thursday it had agreed to be an accredited representative to the investigation of the crash at Iran’s invitation.

“The Treasury will issue waivers for anybody, whether it’s Americans or others that can help facilitate the investigation,” Mnuchin said at a White House news conference.

Ukraine’s President Volodymyr Zelenskyy and US Secretary of State Mike Pompeo have discussed the investigation of the plane crash.

A US statement says Pompeo offered the Ukrainian leader condolences and “full assistance in the ongoing investigation” into the crash of the Ukrainian jetliner.

Zelenskyy’s office said the Ukrainian leader briefed Pompeo about the progress in the investigation, and they agreed that Pompeo would visit Ukraine in late January.

“Grateful for the condolences of the American people and valuable support of the US in investigating the causes of the plane crash,” Zelenskiy tweeted after the call.

Earlier Friday he called for “all international partners” – the US, Britain and Canada in particular – to share data relevant to the crash.

Sweden’s Transport Agency said it had temporarily halted Iran Air flights between Sweden and Iran after the crash of a Ukrainian airliner near Tehran.

“The reason is the uncertainty around the accident and the security of civil aviation,” the agency said in a statement.

Sweden’s foreign ministry said on Friday that seven Swedish citizens and a total of 17 people who lived in the Nordic country died in the crash.

German airline Lufthansa said its flight from Frankfurt to Tehran has been cancelled “as a precautionary measure” because of the security situation for airspace around the Iranian airport.

“As soon as we have detailed information, we will decide if and when our Iranian flights can be operated again,” Lufthansa said in a statement.

Russian legislators said statements about a missile hitting the jetliner are “groundless” and they accused the West of prematurely assigning blame to Tehran.

Vladimir Dzhabarov, a legislator with Russia’s upper house of parliament, said Friday that “we need to be cautious with conclusions. Iranians have invited Ukraine to take part in the investigation. Why would they do it if they knew they had shot [the plane] down?”

Leonid Slutsky, a legislator with Russia’s lower house of parliament, echoed that sentiment and said conclusions about the cause of the crash could be politically motivated.

“Facts and solid evidence are needed, rather than vague references to intelligence findings. So far it has all been groundless,” Slutsky said.

Al Jazeera’s Assed Baig reporting from Tehran said that according to the aviation authority, the pilot did contact Mehrabad airport, which deals with domestic flights in Tehran, seeking permission to climb to a higher altitude of 26,000ft.

“We’re getting that extra information because before we thought the pilot had no communication but now we’re hearing that he did communicate with Mehrabad airport,” Baig said.

The aviation authority also said the plane had caught fire for a minute and a half to two minutes.

“They said that he did try to turn the airplane around and his priority was to save the aircraft and the passengers,” Baig said.

Iranian authorities have said they will try to repair the damaged black box to retrieve the data, but if they do not succeed, they will seek assistance from Canada, the US and Ukraine, Baig added.

“As I said, based on the law, there is full coordination between our air defence and our civil [aviation] system. Our civil aviation personnel and air defence personnel sit side by side, so it is absolutely impossible for such a thing [shooting down a passenger plane] to happen,” Abedzadeh told a news conference.

He called on the US and Canada to share any information they have on the crash.

“What is obvious for us, and what we can say with certainty, is that no missile hit the plane,” Abedzadeh said.

“If they are really sure, they should come and show their findings to the world,” in accordance with international standards, he added.

The footage, posted online by state TV, showed two devices inside a wooden crate which commentary said were the cockpit voice recorder and the flight data recorder.

Both black boxes are damaged but their memory can be downloaded and examined, the commentary said.

The wooden crate was opened at the Iran Civil Aviation Organisation, the commentary said.

Airliner may have been downed by missile: Ukraine

Ukraine’s President Zelenskyy said the possibility that a missile downed the passenger airplane had not been ruled out but it has not been confirmed yet.

He said he would discuss the investigation with US Secretary of State Mike Pompeo later on Friday.

France is available to contribute to the investigation into the crash of the Ukrainian airliner, French Foreign Minister Le Drian said.

“It is important that as much clarity as possible is made and as quickly as possible,” Le Drian said on RTL radio.

Farhad Parvaresh, Iran’s representative at the International Civil Aviation Organisation, part of the United Nations, said on Thursday that France might also be involved as it was one of the countries where the engines were made.

Iran has invited both Ukraine and the Boeing company to take part in the plane crash investigation, state media reported. Iran’s spokesman Abbas Mousavi said Tehran will also welcome experts from other countries whose citizens died in the crash. 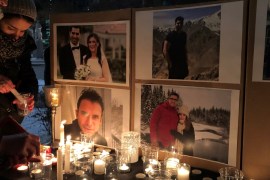 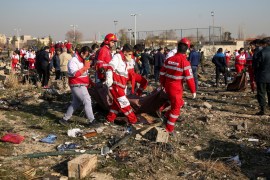 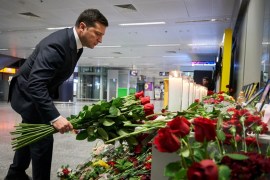 Ukraine jet that crashed may have been shot down: officials

Ukraine, US officials offer theories behind crash near Tehran, as Trump says he has ‘terrible feeling’ about disaster.