Fears of imminent war between Iran and the United States subsided after the US assassinated a top Iranian commander and Tehran hit bases housing American troops in Iraq with ballistic missiles.

But Iran warned the US against further attacks after it launched more than a dozen ballistic missiles at the Ain al-Assad airbase in Iraq’s Anbar province and a military facility in Erbil on Wednesday.

Iran had pledged retaliatory attacks against the US for last week’s killing of Qassem Soleimani, the country’s most powerful and revered military leader, whom Washington accused of plotting imminent attacks against US forces in the region.

Here are all of the latest updates as of Thursday, January 9:

Iran warns Trump of ‘dangerous response’ if US acts again

Iranian President Hassan Rouhani warned the United States it risked a “dangerous response” if the White House tried any further interventions in the region.

US President Donald Trump said on Wednesday that Iran now “appears to be standing down” but Rouhani threatened more retaliatory moves if required.

“If the US makes another mistake it will receive a very dangerous response,” Rouhani was quoted as saying by Iran’s Tasnim news agency during a call with British Prime Minister Boris Johnson.

“The Americans and the White House have no understanding of the region and recognised what a mistake they have made after their terrorist measure and following the uprising of regional nations and the unity that was created.”

A senior Iranian commander said Iran’s missile attacks on US targets in Iraq did not aim to kill American soldiers but sought to damage Washington’s “military machine” and were the start of a series of attacks across the region, state television reported.

Amirali Hajizadeh, the head of the Revolutionary Guards Aerospace Force, also said the “appropriate revenge” for the US killing of Soleimani was to expel US forces from the Middle East, state TV said.

He also said Iran had hundreds of missiles at the ready and when Tehran launched missiles on Wednesday it had used “cyber attacks to disable [US] plane and drone navigation systems”.

“The kingdom denounces and condemns the Iranian violations of Iraqi sovereignty,” said a statement carried by the official SPA news agency.

“Saudi Arabia calls on all parties to exercises self-restraint,” it added.

The Saudi condemnation was the first by an Arab neighbour of Iraq.

In a letter to the UN following the missile attack, Iran said it fully respects the sovereignty of its neighbour Iraq.

Turkey: Iraq cannot be a battlefield for foreign forces

“We don’t want Iraq to be the battle zone of the foreign forces,” Mevlut Cavusoglu told a press conference along with his Iraqi counterpart in Baghdad, Iraqi capital.

Cavusoglu’s visit was part of Turkey’s diplomatic efforts to “alleviate the escalated tension” in the region, a foreign ministry statement said.

Iraq’s top diplomat Mohamed Ali al-Hakim affirmed that talks with his Turkish counterpart focused on the need to respect Iraq’s sovereignty from all sides.

A dramatic escalation between the US and Iran appears to have eased, with both rivals seeming to pull back from the verge of a full-blown conflict, even as tensions remain high and experts warn that the confrontation is far from over.

“The prime minister spoke with President Rouhani of Iran this morning. They discussed the situation in the region following the death of Qassem Soleimani and the prime minister called for an end to hostilities,” the spokesman told reporters.

“The prime minister underlined the UK’s continued commitment to the JCPOA (Joint Comprehensive Plan of Action, or nuclear deal) and to ongoing dialogue to avoid nuclear proliferation and reduce tensions,” he said, adding that Britain’s position was that the JCPOA was the best arrangement available.

European Council President Charles Michel said he had spoken to Iran’s President Hassan Rouhani and urged Tehran to comply with the 2015 arms control agreement that prevents it developing nuclear weapons.

Iran said that it was stepping back from its commitments under the deal, known as the JCPOA.

“Just spoke with @HassanRouhani about recent developments. JCPOA remains crucial for global security. I called Iran not to pose irreversible acts,” Michel, who coordinates EU government positions in Brussels, said in a tweet.

I called #Iran not to pose irreversible acts. #EU has its own interests and its vision & will enforce its role on an international level.

Pope appeals to US and Iran to pursue dialogue, self-restraint

Pope Francis urged the US and Iran to avoid escalation and pursue “dialogue and self-restraint” to avert a wider conflict in the Middle East.

The pope made his appeal, his first direct comment on the current crisis, in a yearly speech that has come to be known as his “State of the World” address to ambassadors accredited to the Vatican.

“Particularly troubling are the signals coming from the entire region following the heightening of tensions between Iran and the United States,” Francis told the diplomats from more than 180 states.

He said the tensions risked “compromising the gradual process of rebuilding in Iraq, as well as setting the groundwork for a vaster conflict that all of us would want to avert”.

Japan backs US on Iran but seeks restraint

Japan said it stands with the US on its response to Iranian missile attacks on Iraqi bases hosting US and coalition troops, according to local media.

Speaking to reporters in Tokyo, Prime Minister Shinzo Abe said: “Japan has been urging all parties involved to exercise self-restraint so it’s our stance that we support the restrained response [by the US],” Kyodo News reported.

The agency was quoting senior commander Abdollah Araghi, speaking after Trump said on Wednesday that Iran appeared to be “standing down” after launching missile strikes that did not harm any US troops in Iraq.

In a separate report, Tasnim quoted deputy IRGC head, Ali Fadavi, as saying Iranian missile attacks on US targets were a display of Iran’s military power and said US forces “couldn’t do a damn thing”.

Iran’s ambassador to the UN dismissed as “unbelievable” what he said was Trump’s call for cooperation, given Washington was imposing sanctions on Tehran, Iran’s state news agency IRNA reported.

Majid Takht Ravanchi, in what appeared to be Iran’s first official reaction to Trump’s address after an Iranian missile attack on Iraqi bases housing US troops, was quoted as saying Washington had “initiated a new series of escalation and animosity with Iran” by killing Soleimani.

A commemoration ceremony to celebrate the life of slain military commander Soleimani, the head of Iran’s elite Quds Force, was held in Tehran, close to the official residence of Supreme Leader Ali Hosseini Khamenei.

Al Jazeera’s Assed Baig, reporting from Tehran, said: “Iran is still in a period of religious mourning and these ceremonies usually take place three days after somebody dies, another one after seven days, then after 40 days.”

Gulf stocks rose in early trade, led by markets in Dubai and Kuwait, on optimism that tensions between the US and Iran may be easing.

The Dubai index and Kuwait index were trading 1.3 percent higher, while the Abu Dhabi index rose 0.8 percent in early trade.

Iran’s next move will depend on the actions of the US, Iran’s ambassador to the UN said, while calling for the removal of US forces from the region.

“Increasing the tensions in the region will not be in the interest of anybody, so Iran definitely would like to have peace established in the neighbourhood and the first ingredient for peace in the region is the removal of the forces, the American forces, from our region.”

Stock markets in Asia rebounded as concerns over a potential war between the US and Iran eased.

Investors’ anxiety subsided after it emerged that the missile attack had caused no fatalities and Trump said Iran “appears to be standing down”.

The lack of casualties “gave the markets more confidence that the Iranians had instigated little more than the intention to make a public show of force mainly to save face at home,” said Stephen Innes of AxiTrader in a report.

US to UN: We’ll take more action ‘as necessary’ to protect troops in the Middle East

The US told the United Nations that it is prepared to take additional action “as necessary” in the Middle East to protect US personnel and interests in the region.

In a letter to the UN Security Council, US Ambassador Kelly Craft said the killing of Soleimani in Baghdad on Friday was justified under Article 51 of the UN Charter.

Under Article 51, countries are required to “immediately report” to the 15-member Security Council any measures taken in exercising the right of self-defence. The US used Article 51 to justify taking action in Syria against the ISIL (ISIS) armed group in 2014.

US senators denounce ‘lack of evidence’ to justify killing of Soleimani

Utah Senator Mike Lee, who belongs to Trump’s Republican Party, has questioned the administration’s classified briefing on the killing of Soleimani, calling it “the worst” he has ever attended.

In a press conference in Washington, DC, Lee told reporters that he found it “really upsetting” that Trump’s intelligence officials refused to provide information that led to the president’s decision to order Soleimani’s killing.

Republican Senator Rand Paul said he “did not learn anything from the hearing” that he had not seen in news reports, adding that prospects for diplomacy had diminished because of Trump’s action.

Meanwhile, in an interview with CNN, Democratic Senator Chris Murphy said “there was no evidence of an imminent and specific threat” from Soleimani to justify the US’s action.

“That was fairly shocking to us, the lack of evidence. Without that, the president doesn’t have the authority to take military action without coming to Congress first.”

However, most Republicans, who control the Senate, defended Trump’s decision.

Australian troops and personnel will stay in Iraq to continue their mission, Prime Minister Scott Morrison said, as tensions eased following an Iranian attack on US forces there.

Speaking to reporters, Morrison added that an Australian naval vessel would travel as planned towards the Strait of Hormuz this week to help protect shipping in the area. 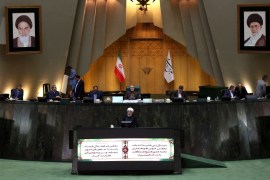 Soleimani and the strategic impact of US sanctions on Iran

Iran’s economy has been hammered by sanctions, but did they achieve the US’s stated objective? 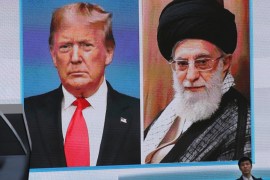 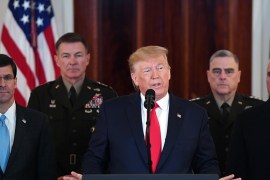 US senators slam WH briefing on Soleimani: All the latest updates